My last stop in the Carolinas before a lonely Grey-dawg back to chilly D.C. had to be BBQ, and after just a tiny bit of research I found a place that promised to be good for it. Mac’s Speed Shop in Charlotte, NC seems like a pretty well known place, though some locals swear there are much better low key meat joints around. But, well, I heard somewhere that Tony and Keller have both been and have mainly positive things to say about the place so in the interest of experiencing good barbecue on time I convinced my friend to try it out with me after our all-day road trip back to NC from Myrtle Beach.

Ideal on such a hot summer afternoon, the rather large outdoor patio offers a breezy, open air atmosphere as an alternative to the air conditioned, dark, biker-themed interior. Nothing fancy but nothing sloppy either. Simple benches with napkins and bottles of signature sauces squeezed into 6-pack holders on each tabletop. A few Harley’s here and there but nothing too in-your-face, which was surprising to us especially since we had happened to spend a weekend in Myrtle Beach which overlapped with Black Bikers’ Week and were thus pretty used to seeing and hearing these menacing machines drone past us constantly. Service is friendly, if a little scattered. The beer selection is awesome, very varied and with a “High Octane” section of the list dedicated to particularly booze stuff. Prices are surprisingly low. The menu is pretty traditional, with classics well done dominating over creative flare. First-timer-friendly combo platter options made ordering particularly easy in our case – we were looking to try a bit of everything and with the “A Little Bit of Stuff” platter we managed to do just that without bursting at the seams.

The combo platter option gives you a choice of four meats while the “Sidecar” part of the menu makes trying out side dishes very easy and affordable…3 for $6, 4 for $8. I love restaurants that encourage variety. We chose the Pulled Pork, Beer Can Chicken, Brisket and Ribs with a side of collards and mac ‘n’ cheese. We also got a nice little appetizer to start out with as we had not eaten anything since Myrtle and were too hungry to wait out the platter. Unfortunately the appetizer got there after the main, but I guess it was fine as a side as well.

I’m talking about the Tabasco Fried Pickles served with ranch dipping sauce. The pickles had been sliced thin (which definitely beats fried pickles in wedge form) and marinated in tabasco to acquire a spice that survived the battering and frying process and came through in the finished bite, interlaced with the acidity of the pickle. The combination of the juicy, moist interior and the gritty, crunchy cornmeal batter exterior was great, though the ranch was a bit too thick in my opinion to dip into. 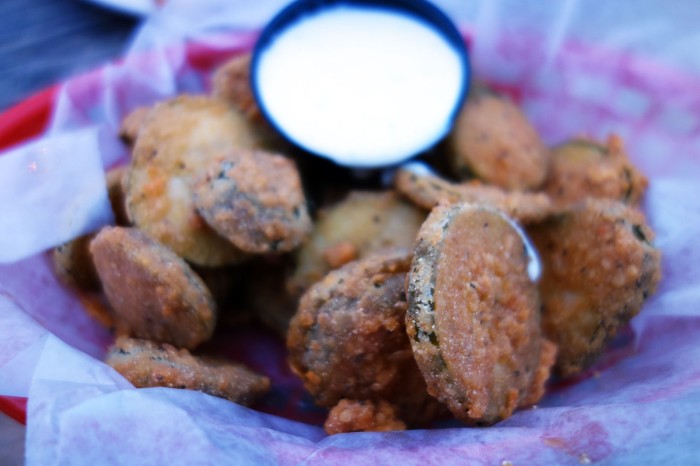 The first side we got was a bit underwhelming, though I never really get excited by Mac ‘n’ Cheese, no matter how high-grade the cheese and how fresh the pasta. It’s a dish that to me is always either overdone (with the ridiculous addition of truffle oil, for example) or underdone (as it was in this case). Plain cheddar, creamy in some spots and crunchy in others, though not very exciting in flavor. Plain elbow macaroni which, as I’ve said before, I’d really rather use to make Mothers’ Day cards with. No exciting fat element like drippings of a smokey meat or anything like that. My friend seemed to enjoy it and I’m sure for her it brought out that warm sense of comfort food simplicity. In my case, I just don’t have any sort of sentimental attachment to the stuff so, as always, I pass on the M’n’C.

Next up were the Collard Greens. Unlike the steamed garlicky spinach I’m used to, collards always seem a bit watery, almost as if they were the centerpiece of some soup. In this case too, plenty of the cooking liquid was left at the base of the greens and this served as a neat little broth, seasoned with the vegetable and the smokey ham in there. I threw it back like a savory shot at the end of the meal. I liked that they had de-veined the greens to remove some of the bitterness but still kept the firmer stems to give the dish a bite which the wilted, butter-soft leaves could not have contributed on their own.

And now onto the meats. The Pulled Pork BBQ,  I’ve come to find out, had been slow cooked in a smoker all night before being tossed in a moderate amount of Carolina BBQ sauce and served. Although the flavors of the meat were there, smokey and salty and deep from the fat of the pig, I was a bit disappointed with the texture which was too dry and stringy for something that had been slow cooked for so many hours. As recommended, I slathered the thing with more of the sweet Carolina BBQ sauce, which eventually gave it enough moisture to make it enjoyable to chew and savor. The flavors of the sauce actually didn’t overpower those of the meat so I guess this was okay, though I would have preferred the meat to be more tender to begin with.

Next up, the Carolina Beef Brisket, dry rubbed and slow cooked for hours and then finished on the grill with Mac’s signature Red BBQ Sauce. This one I liked a lot. The meat was firm but tender and a lot of wonderful flavor was gradually brought out through the slow cooking process. A bit chewy but with the meat releasing plenty of tasty juice while I chewed. Nice grill lines and char were added later making for just a hint of smoke which allowed the flavors of the meat to dominate instead. The sauce was really nice too, a tangy and brown sugar sweet tomato-based BBQ sauce with a hint of vinegar to save it from becoming too much of a candy coating. There could have been one more brisket there but I guess this is one of the denser bits of meat, so maybe it’s okay that my friend and I didn’t each have a whole one.

Next came the Beer Can Chicken, also slow smoked and then finished on grill for some char. Chicken rarely seems to satisfy me completely as I am often left yearning for something with a fuller flavor and a juicier, sweatier, bloodier meat than a plain white breast. This was one of those few cases in which I was left without any regrets for having ordered it. It was dark meat, a full leg quarter with meat that was almost creamy; tender, smooth, juicy and moist from cooking in its own steam that has been trapped between the skin and the flesh. The skin was delightfully crispy, peeling off the flesh like a scab, blistered unevenly by the char of the grill which made for a smokey, slightly bitter taste that contrasted nicely with the subtle sweet of the meat. The chicken was left in the nude, no sauce over it, which I very much enjoyed. The thing is great on its own but also serves as a perfect canvas to sample each of the sauces on.

I had thought the Pulled Pork would be the flawless pride and joy of the place, but it seems highly likely that their actual signature is the St. Louis Style Ribs, dry rubbed and slow smoked for 12 hours, doused with their award-winning Red BBQ Sauce. No complaints and I do mean none – these were both my friend’s and my definition of the perfect ribs. Although it first seemed that the ribs were not meaty enough, I changed my mind when the juicy flesh started tumbling off the bone. The crust had a nice crispy texture to offset the seductively tender meat inside and the salty, smoky flavor blended beautifully with the sweet and slightly sour tomato-vinegar sauce. I closed my eyes while biting into this one, kept them closed throughout. Beautiful, beautiful ribs.

Mac’s Speed Shop wasn’t really what I was expecting, but not necessarily in a bad way. I didn’t overeat, the dishes weren’t too heavy and it was a fun journey of flavors and textures despite the menu being so classic. It was surprising that I could enjoy chicken so much and that the ribs were so much better than the pulled pork, though maybe this was the case only on the specific day we were there – who knows? Overall I had a great experience noshing on meats with my Allagash White, savoring the last few minutes I had with my friend whom I probably won’t see again for a while. If I’m ever in NC again, I will definitely go back.