The picturesque and very quaint Catalan town of Girona is a great place to spend an afternoon but not too much more than that. There’s a series of graceful footbridges crossing over a mostly dried out riverbed and a row of colorful riverfront houses on either side of those bridges. There’s a plaza, some charismatic narrow side streets, a gothic cathedral and a castle to climb for views of the city and the mountains surrounding it. In the summertime it’s probably a great place to sit around for hours with a cone of fresh churros or a chilled bottle of white wine. But in the wintertime it’s cold and there’s not a lot to do indoors besides shop and eat tapas. So that’s mostly what my friend and I did when we visited the town last week.

The highlight of our morning was stumbling across Rocambolesc, an ice cream shop located in a small street across the river from the cathedral. The shop is the brain-baby of Jordi Roca, the youngest of the three bros behind world-famous, three-Michelin Celler de Can Roca not far from Girona’s city center. Pastry Chef Jordi’s concept was to bring back the traditional dessert trolley of El Celler by wheeling his sweet treats around town and offering petit fours to random passersby. When local health code regulations got in the way of his idea, he opened this venue to showcase his creations. 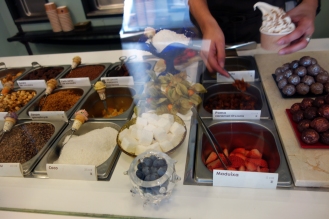 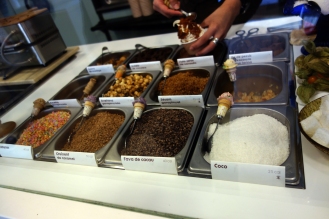 The shop has a vintage feel modeled after the magical world of Willy Wonka’s chocolate factory. And the sweet offerings are as dreamy as the decor: hot buns and muffins filled with ice cream, 34 bizarre toppings, and a DIY version of the the famous milk dessert with cotton candy, guava, milk caramel, sheep’s milk yoghurt and local Ripollesa sheep’s milk ice cream.

The list of ice cream flavors is limited to six but they rotate seasonally and according to Jordi’s temperament. Toppings include carefully diced fruit, nuts and chocolate nibs, bits of cookie, cake and fudge, homemade marshmallow, homemade apple pie filling, fluffy cotton candy and chocolate covered poprocks. There are also Cape gooseberries, which look cool on any dessert. 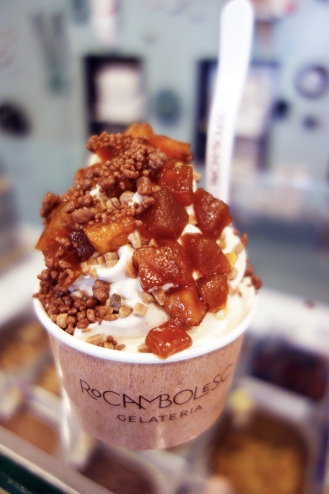 I tried the baked apple ice cream with chocolate popping candy and cubes of sweet baked apple over the top. It was everything I was hoping it would be. The texture was dense and sturdy but not too stiff, maintaining perfect structure while the smooth exterior melted just enough. The cone of cream was cold and fresh against the tongue, yet its flavor was that of a warm and caramelized apple pie with a buttery crust straight out of the oven. The cubes of syrupy apple and chocolate snapping candy were the perfect toppings, transforming the ice cream into a bowl of “apple pie à la mode mais à revers.” 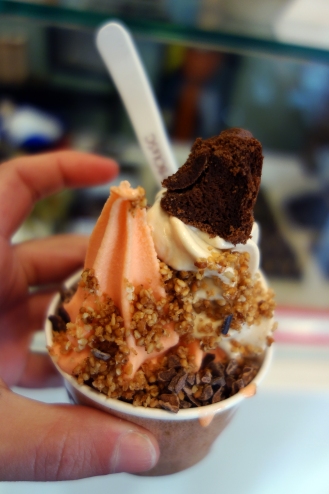 I also tried the carrot sorbet and the panettone topped with toasted sesame seeds, cocoa nibs and cubes of chewy brownie. Although the flavor of the carrot was fascinatingly faithful to the root vegetable, one tasting spoon would’ve been quite enough and I ended up regretting to opt for a whole portion of the orange stuff. The texture was nice and stiff, dense instead of watery, but it just wasn’t as naturally creamy as either of the ice creams I tried. I also didn’t think any of the toppings really accommodated the vegetal flavors too well. (Something like crumbled goat cheese perhaps would’ve maybe done the trick.) The panettone ice cream was, on the other hand, wonderfully smooth and velvety with the taste of browned butter and sweet bread dough.

If ever in Girona, try to reserve at El Celler de Can Roca. You will probably fail. But when you do, there’s a sweet little treat named Rocambolesc to pat you on the back and to give you a taste of what you’re missing in that magnificent dining room. Vibrance, color and innovation on a fluffy bed of cotton candy. No trip to the town is complete without trying a spoonful. 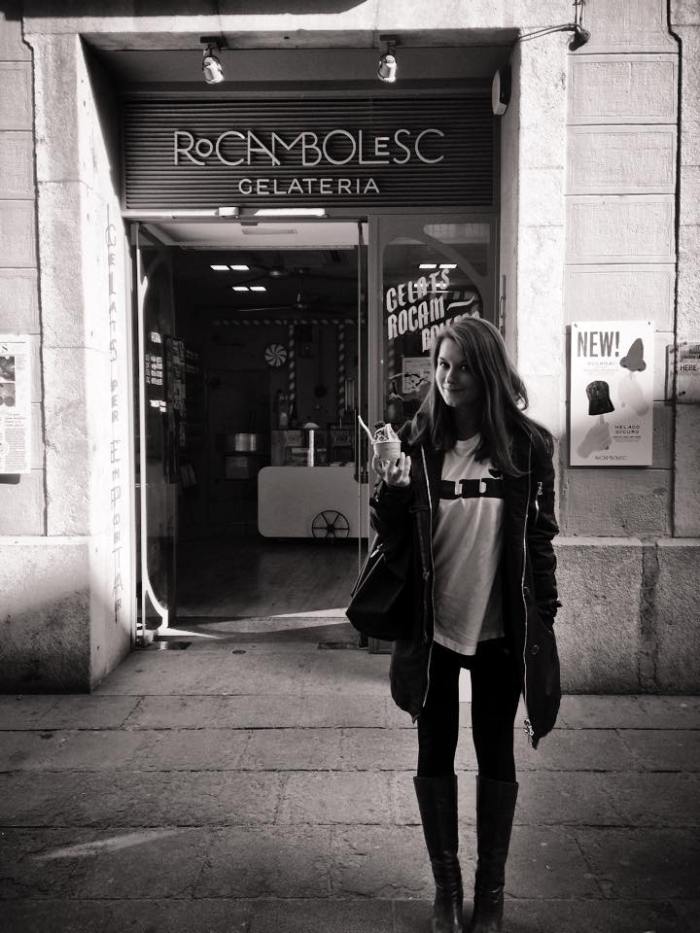