Six years ago I visited Galway and fell in love with the city by the sea. Winding cobble-stoned avenues lead down to a harbor where a row of colorful houses glow bright under the setting afternoon sun, their various shades of red, yellow and green reflecting clearly in the crisp waters of the Atlantic below. It’s a college town with a freakishly large portion of the population represented by young people (20-24 years old). Indeed, the entire city center looks a bit like a university campus whose social focal point is clearly the promenade along the bay. The coolest thing to do on a sunny day in Galway is to hang out there with friends and share a six-pack of beers with feet dangling above the water.

The city is also very well known for its fresh, Atlantic seafood, it’s oysters, mussels and crab. And a good place to get all that is a restaurant called The Fisherman Seafood Bar & Grill in Salt Hill. The owners source their own fish from trawlers set up on the west coast, just as they’ve been doing for 40 years. The place guarantees local, sustainably caught and daily fresh products on a menu that truly showcases these items without too much fuss. From sea there is cod, hake, haddock and monkfish; there’s salmon (grilled and smoked) and lobster; there’s cocktail prawns and crab claws and there’s oysters on the raw bar. The kitchen is flanked by a seafood counter and fresh filets are lain out on a bed of ice for scrutiny of the guests. It’s always a good sign when ingredients are so proudly showcased.

I ordered a half-dozen Kelly’s Galway oysters, which were kept fresh in a box covered with moist seaweed prior to shucking. The wild native oysters are harvested from a small inlet on Galway Bay by the Kelly family, who has been in the business for the past 60 years. Each oysters had a nice plump, tight body and a fresh, clean taste not too muddled by mineral funk. They were served with lemon and a simple mignonette. A bit expensive but worth the try.

The smoked salmon salad was a refreshing dish with thick ribbons of juicy fish rolled up with mixed greens, capers and slivers of red onion. The greens were tossed in a light vinaigrette that took nothing away from the zest of the fish. The salmon had plenty of wood-smoke flavor but wasn’t too salty or oily in the least. Not the most exciting thing on the menu but a nice light way to dive into the meal.

I also ordered a bowl of steamed mussels, which came in a lemon and white wine broth with some chopped veggies and jalapeño rings tossed in as well. The juicy orange mollusks were a bit small in size and not as plump as I usually like them, although they had a nice tight skin and a creamy interior. They also had lots of clean, fresh marine flavor to them and not too much of the stinky low tide brine I had anticipated. I liked the sauce save for the jalapeño, which seemed just a tad too spicy for a dish that needed the zing of garlic more than the heat of a chile. I enjoyed most dunking a generously buttered slice of soda bread into the sauce until the wheaty fibers soaked up the savory liquid and the cool layer of heavenly butter melted slightly from the heat of the latter. Have I mentioned how much I love Irish butter? 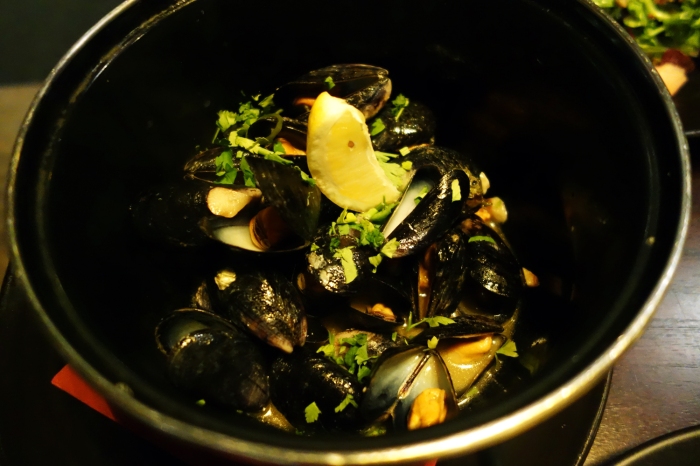 My friend and I had a nice time at The Fisherman, tasting some of Galway’s fresh local catch. I only regret not trying their signature seafood chowder, which from photos looks thick, warm and creamy. Perhaps when I next return to Galway city…