“I will never move above Diagonal,” I solidly declared back in January. “That’s where old people and families live.” Maybe. But, as it turns out, El Barri Gòtic is for the most naive of tourists, Erasmus students and the shrewd, local pickpockets who rob them with ease. It’s the Disney World of Barcelona; far from the typical Catalan neighborhood for which I was once naive enough to misunderstand it. In a matter of three months I came to realize that the real city center of BCN is nowhere near Gótico or El Born or Barceloneta. These are barrios one visits for a drink after work or brunch on a sunny Saturday afternoon; the moto ride over makes it a special treat. But living in the midst of that nonsense just didn’t end up working out for me, so I moved to beautiful Gracia, to an address a 1-minute walk to Diagonal and close to absolutely everything I want my new life to include. Particularly supportive of this decision was my pololo, who happens to be Gracia’s #1 fan and a proud resident himself of the ayuntamiento. In an effort to encourage me to explore the new ‘hood last week he organised an Easter egg hunt whose clues lead to a table at one of Gracia’s most iconic culinary institutions, Restaurante Botafumeiro.

Botafumeiro specializes in fresh, seasonal fish and shellfish from the Galician and Catalan coasts, sourced onsite daily at intensely competitive live seafood auctions. Chef and Owner Moncho Neira firmly believes that primary selection is key, that when the raw material is of top quality it needs only to be treated with respect and left to speak for itself. No heavy sauces or seasonings, just a touch of heat where necessary or a pinch of salt to bring out the essential flavors and textures. Chef Neira’s product-forward approach is best represented by Botafumeiro’s mighty seafood towers, steamed and grilled assortments of mariscos from the “Botafumeiro Selection.” (These items can also be ordered individually by weight.) While the kitchen does a wonderful job stepping aside to let nature shine when it comes to the bare seafood, chef-ly talent is otherwise demonstrated through an array of thoughtfully composed shellfish soups, stews and salads. Daily fresh, wild fish are sold per part or portion, creatively prepared and beautifully plated. A variety of paella and other rice dishes are assembled with ingredients such as lobster and sea cucumber. The menu even boasts a signature version of a traditional Galician cod pie with raisins, a dish I will have to try on another occasion.

Botafumeiro has only been around since 1975, though it has the air of a turn-of-the-century dining club. Table-setting and service bear a flair of old-fashioned elegance: starched linen tablecloths, a wide lineup of utensils, waiters clothed in bright white with collars pulled tight over the neck. The usual monkey-business at seating and wine selection. In the case of Botafumeiro it must be a chilled white. We opted for a bottle of mineral, citrusy Ruedan Verdejo to pair to the Cantabrian Seafood Platter. 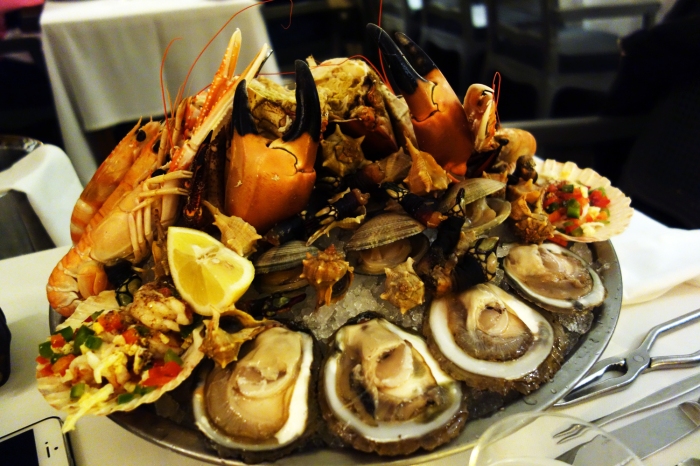 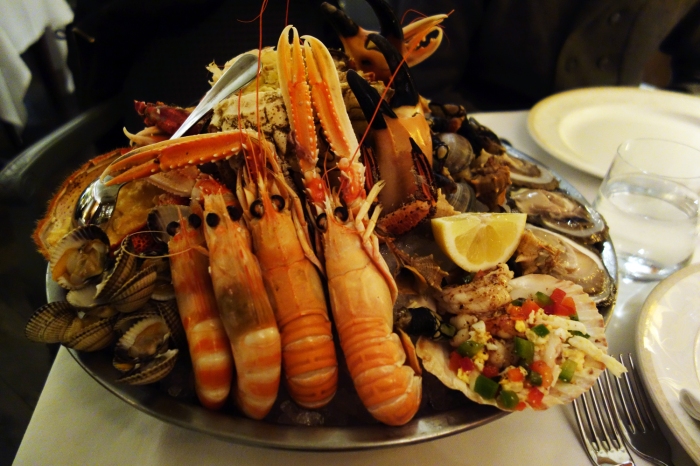 Our reservation was at 9:30 p.m. and we left as they were closing three hours later. With that said, we didn’t actually stop eating during those three hours, save for one cigarette break in the middle of the meal and another towards the end. We slurped crispy-cool oysters garnished only with a squeeze of lemon and tugged the twisted bodies of cañaílla sea snails out of their spiky shell homes. We tasted slippery-smooth raw clams from Carril and picked curly-cued, yellow berberecho meat from smaller cockles. We were puzzled trying to figure out the way to eat the barnacles, so we kind of just sucked the seawater out and pushed them aside on the plate. (It was, unfortunately, a few days after this meal that I watched a youtube tutorial demonstrating how to remove the hardened crust to uncover the soft purple body within. Stretching forth seductively from within the arrangement were the bright red legs of spider crab and hairy velvet crab. These were torn open to reveal the creamy white flesh within. Luckily we had the perfect tools to get at the supple, sweet meat. Lined up on two sides of the bowl were neat rows of shrimp, prawn and langoustine (a.k.a. Norway lobster) to tear into segments and suck at mercilessly. I noticed halfway through my battle with a particularly tough-shelled langoustine that my index finger had been bleeding and that I had broken two of my nails. The next day, in fact, the tips of all my fingers stung painfully. But the sting did not bother. It brought back only pleasant memories of the night before.

The flow of fresh seafood, delightfully simple and untampered with, was periodically interrupted with things created by the kitchen. Two large scallop shells, like the vessel of Boticelli’s Aphrodite, hung off the side of the bowl, loaded with a wonderfully vibrant salpicón. Crunchy, fresh green and red bell peppers were finely chopped and mixed with grated hardboiled egg and bits of prawn. The salad was dressed with an aromatic truffle vinaigrette that contributed decadence without overpowering the sweetness of the seafood. In the body cavity of a spider clam nearby was a mushy, warm spread made with the meat of the animal, along with egg and mayonnaise. Particularly plump and fleshy chunks of shrimp tail were dipped into one of two sauces offered: a freshly whipped, airy mayo and a traditional romesco of nuts and herbs. These elements composed by the chef rounded out the meal by balancing the cold, briny marine stuff of nature with the comforting familiarity of a human touch. 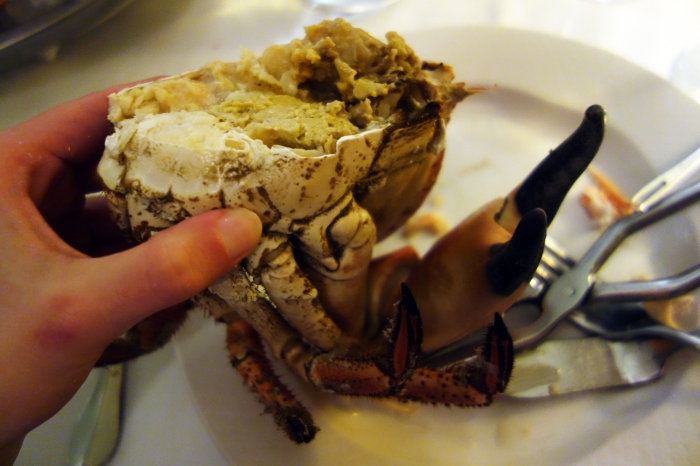 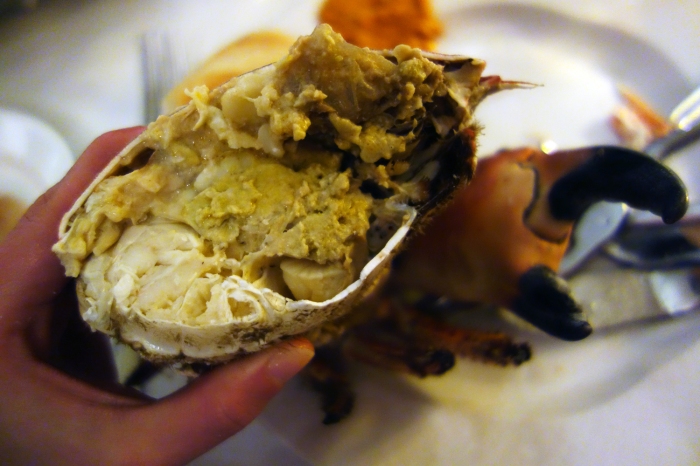 Perhaps the most luxurious item in that tower was the massive buey del mar (brown crab) snapped in two and mounted whole, above all the rest, claws and all. On this occasion we did not save the best for last but scarfed the crab down towards the middle of the meal. As my boyfriend very logically observed, “I’m not getting too full before eating this.” Cracking into shards the enormous and porcelain-hard claw yielded one single succulent, beautifully moist muscle of sweet marine flesh that melted on the tongue into soft, white fibers. The flavor was similar to that of a stone crab claw, though maybe a bit more opaque in color and with less silken fat laced around the exterior of the meat. (In this regard stone crabs still win.)

Next came scooping out the flesh and brown stuff locked inside the narrow grooves of the body cavity. The brown I spread onto slices of Botafumeiro’s freshly baked bread with a layer of creamy, whipped butter in between. I assembled little bites like that with crab, prawn and langoustine tomalley and reached across the table to feed them to my man, all the while harping on about my family’s trips to Rockport and how I used to do the same with the greenish lobster gunk at Roger Moore’s by the bay. The cholesterol-laden crustacean custard brings a deeply funky low-tide brine that is soothed by the elegant sweetness of the butter. Mushy and uneven crab guts top a smooth, even layer of butter atop chewy, fresh bread that serves as the perfect foundation for both. Some may be repulsed by this intimate invasion of the crabs’ anatomy, but thankfully my companion registered the tastiness of my little open-face gut sandwiches and recognized the gourmet value of my operation. 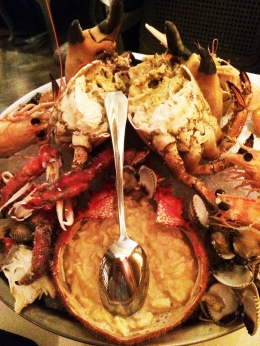 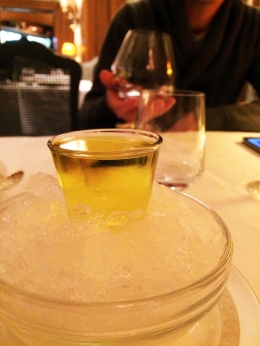 The two of us managed somehow to finish it all, though the post-feast cigarette was not quite enough of a digestif. He ordered a stately glass of Cognac, which he stirred purposefully until the liquid was warmed by the heat of his palm. As the latter is completely wasted on me I chose instead a chilled chupito of bright yellow orujo de hierbas, a liquor typical of Cantabria from whence hailed most of our seafood tower. It’s a byproduct of wine harvest, made from the grapes after they’ve been squeezed free of must. The bitter herbs woke my organs from their peaceful state of slumber and set them to work grinding down the protein, the sugar, the sultry, silken fat.

I was fully expecting to wake in the middle of that night, clutching a swollen stomach and agonizing over the sudden increase in its volume. But that never happened. I got up early for an appointment the following morning and bought my regular savory and chocolate-filled mini croissants on the way over. Our epic feast of marine flesh left no heavy trace or feeling of guilt to haunt us afterwards; only a few cuts on my fingers and memories of a wonderful meal as Gracia’s newest resident.

One thought on “A Cantabrian Seafood Tower at Botafuimeiro”