It’s gotten cold up in the mountains of the Priorat as of late. While I sit in my brightly lit and climate-controlled Barcelona apartment my colleagues gather dry wood in early afternoon darkness, twigs with which to make a fire, not recreationally. There’s no marshmallows or campsite stories going around. It’s just a part of the routine. I was craving for a spoonful of modest reality last week, for authentic conversations and a lack of wifi, so I hopped on a train and arrived in frosty Reus just ninety minutes after. I was there to breathe clean air and gaze into the distance, to empty my mind and let go. I was also there to eat something good, warm and homemade; a meal hearty enough to need a nap after.

We went to La Venta because we always go to La Venta, and I started planning my order in the car. Grilled rabbit maybe, or buti negre with escalivada or samfaina (that’s Catalan ratatouille). These were things I had enjoyed there on countless occasions but only during the months of summer and early autumn. What I remembered feeling heavy and dense during the warmer seasons seemed perfect for wintertime and I was looking forward to ordering these Catalan countryside classics with a big porron of red wine, which also seemed so much more appropriate on a cold winter day. The six grannies manning the kitchen were busy as always feeding their winter clientele, like hundreds of grandchildren, and making them feel just the way I had come to Priorat to feel: cozy, comfortable, loved. As it turned out the menu had itself put on some winter weight. There was less grilled meat, more baked and braised. Fewer salads, more escudella and ollada soups. There was seasonal rotation, exactly what I had hoped to find.

We sat at a table right by the fireplace. “Tostada?” asked one of my colleagues (read: sisters). When I nodded she pierced a slice of bread through a fire iron and waved it above the flames, all in one motion as fluid and natural as pushing down the toaster latch would be for me. Then came small tomatoes and garlic to rub over the bread, a bowl of beady Arbequina olives and a jug of house red. Everything was perfect already. And then I saw the lentils. 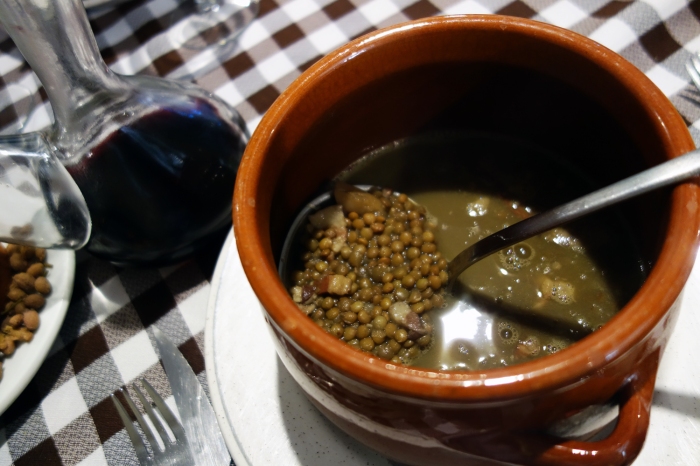 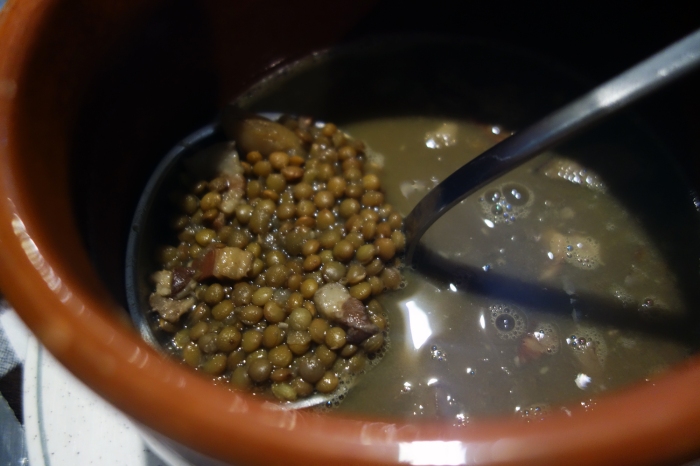 I love a good lentil stew, especially in the wintertime. To me no other ingredient serves as a better carrier for warmth and comfort. The dish is a vehicle for love, a firm and lasting hug, the type that makes the recipient catch a deep breath. The earthy flavors of the lentejas combine with salty, smoky ham to create something simple and sobering, while the starch of the seed naturally thickens the cooking liquid, transforming the latter into a thick, dense and velveteen base. My mom makes the best one, with pork shoulder or hunks of butt. Granted, pretty much everyone’s mom or grandmother makes their favorite version. Very few restaurants get it right. San Juanino in Buenos Aires remains the only one that truly nails it every time.

I was hoping La Venta’s lentils would do it for me and the dish got pretty close, but there was a cohesion of ingredients badly lacking. The lentils themselves were cooked to a great texture, a smaller and greener variation than the large brown ones used in Hungarian home-cooking. Spoons piled high with just lentils were wonderfully mushy and flavorful, but on the whole the stew was a flop. There were tiny pieces of bacon but not nearly enough and I was missing both the infusion of porcine zest and the satisfaction that comes from biting down on a chunk of slow-cooked meat. The broth was also not thick enough. The cooking liquid stayed just that, a murky poaching water, instead of transforming into a voluptuous, silky thang with body and soul. The lentils sunk to the bottom of the bowl and the soup rolled right off them, as if repelled by an ingredient it just had no interest in. I squinted hard to detect any possible redeeming features but did not find any. There was no hiding my disappointment. 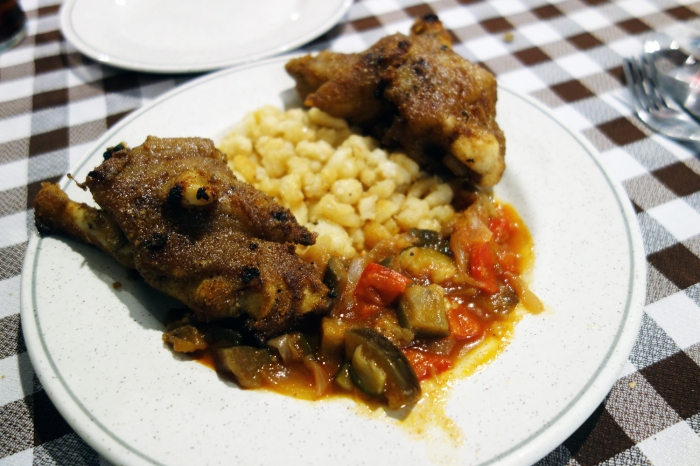 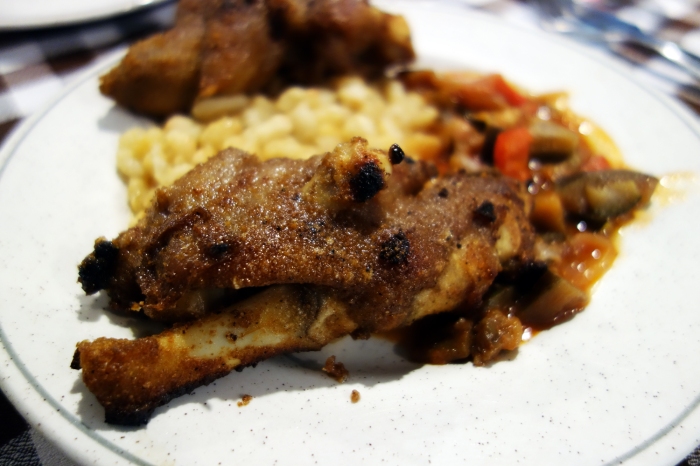 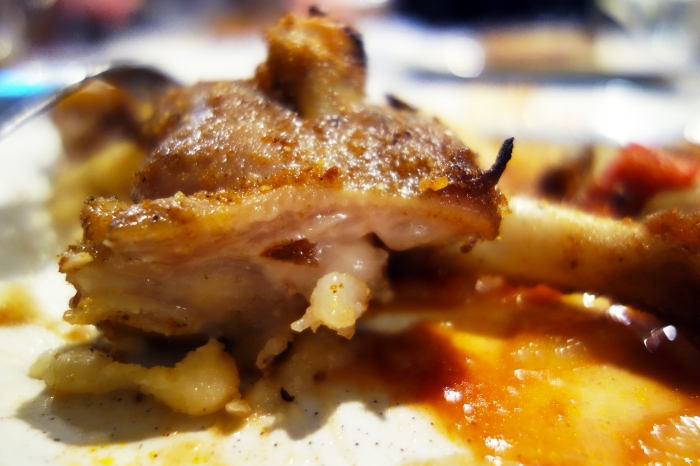 What the lentil stew lacked the pies de cerdo made up for a thousand times over. I was lucky enough to grab the last portion the kitchen had for the day and shared it with my colleague. We’ve talked about the experience almost daily since then. It’s La Venta’s wintertime pork knuckle dish; ham hock boiled, then baked, and served with two sides. A wonderful contrast in textures existed between the outer coat of homemade breadcrumbs (seasoned with cinnamon and baked to a painfully awesome, crunchy crust) and the jiggly, moist, and slippery-smooth interior. As the plate was set down before us I tested the breadcrumb coat by scraping a nail across the surface. The grainy, tight crust crackled loudly as I tapped it, a sound like music to my ears. Underneath, the naturally sweet, bone-adjacent meat, bits of fat, glossy collagen, and crisp skin lured my tongue into a trance of tantalizing textures – gooey, wet bits that made my eyes glaze over and my vision shift out of focus for more than a moment. I abandoned fork and knife early on, grasping the pettitoes in hand, raising them to my mouth and ripping off fibers of meat and connective tissue until there was nothing left.

On the side was a hot mound of samfaina, which is stewed eggplant, peppers and tomatoes seasoned merely with salt and held together with oil. I also ordered mongetes, a Catalan preparation of white cannellini beans. These are first boiled and then deep-fried until golden brown. Frying cracks the skin of the beans, adding a wonderful crunch and a nice sandy texture, while the interior becomes butter-soft and thick with smooth starch. I could honestly eat these veggies and beans and nothing else all day. They complement each other in every way imaginable and effortlessly achieve warmth and comfort in the eater.

It’s by no means overkill to say that this dish was nothing shy of perfection and exactly what I had been craving on my return to the Priorat. I’ve had plenty of lentils in my life. I’ve experienced time and again their ability to bring joy and comfort to a table of family or strangers. I’ve never, however, been so blown away by pork knuckles, not even in Asia (which is saying a lot). A very special dish enjoyed in the best company with two porrons of red and one mini each of rancio for dessert.