As I tucked my little Sony Cybershot into my suitcase on the morning of my flight to Rome, I was hoping to find some places worth writing about. Tons of work for school left me with no time to do the research I normally do before visiting a new city, and I only had a list of spots from a friend to rely on. We were staying in the Trastevere neighborhood, which, although beautiful, is at its core very touristy indeed. And I was worried – no, terrified – of falling into the traps, of wasting perfectly good hunger on a fake and overpriced meal. Wobbling in my heels down the dangerously cobblestoned streets of this neighborhood, I looked to see only red and white checkered tablecloths, laminated picture menus, cold plates of food on display (a repulsive no-no that flat-out tells me not to eat there). Walking down a street in this quarter was like taking a ride through a haunted house at an amusement park – but instead of masked serial killers with chainsaws, it was bowtied shills luring unsuspecting tourists aggressively into restaurants for what would inevitably be a mediocre experience.

Trattoria da Augusto is no such tourist trap. It’s an unassuming, no-frills eatery on a corner of Piazza de Renzi with Formica tables covered in butcher paper. It looks like it’s been around for a while and there’s a line there, always. We got in and considered our options, how long we’d be willing to wait for a meal at an already pretty late hour. But when the guy in front heard us and turned to say, “It’s worth the wait. At this hour they will probably only have a few things from the menu, but it’s okay because everything’s good,” we decided to stay. We learned that the rabbit would probably all be gone, which made me pretty sad because I really like rabbit. By the time it was our turn to be seated, however, I had made my peace with this small misfortune. 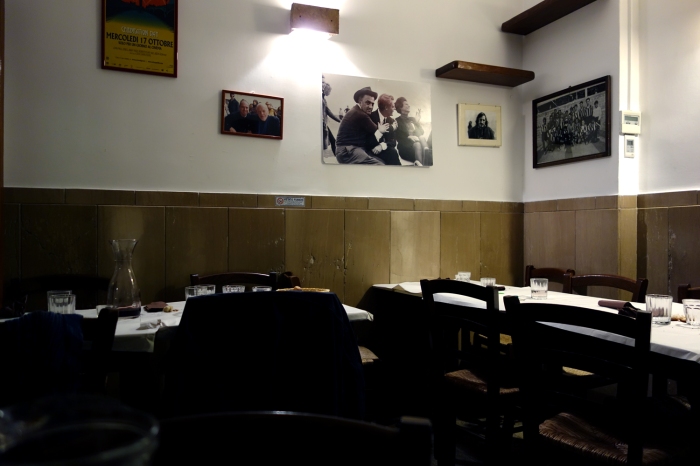 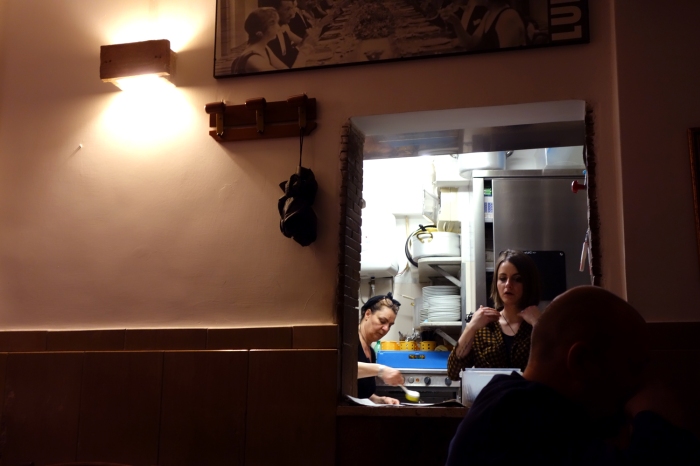 At Trattoria Da Augusto you’ll get some serious nonna-style Roman fare. Think about the last time you were at your grandmother’s house. Were her dishes carefully garnished with pretty, but unnecessary, micro-greens, julienned vegetables or foams of any kind? No. For overpriced and over-garnished beautifood you go to a restaurant. For a meal that hugs you, one that warms your bones and comforts you with its rich flavors and patiently teased out tenderness, you go to your nonna’s house. Or, in this case, Da Augusto.

At Da Augusto there’s an actual nonna working in the kitchen visible through a little window counter. There are two or three younger women who work the tables with a charmingly brusque “What do you want?,” no-bullshit attitude that I really don’t mind in a place like this. The place is buzzing with loyal patrons, each of whom have nothing but good things to say about the food. 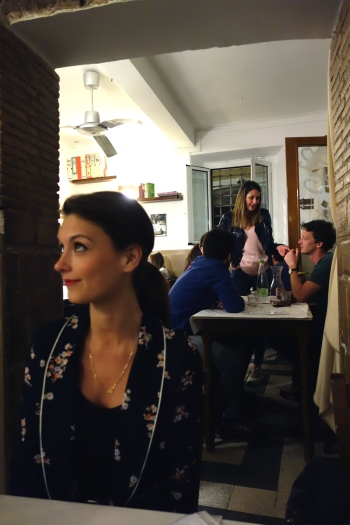 The menu includes a very limited selection (which becomes even more limited by 9pm) of pastas, soups, meat and fish. There’s meat broth served with egg, called stracciatella (alla romana), some rigatoni in a variety of sauces, ravioli filled with cream cheese and spinach, lasagna, gnocchi and pajata (another Roman dish made with calf intestines). But here’s the kicker: Lasagna is only available on Sundays, gnocchi on Thursdays, rigatoni with pajata on Tuesdays and ravioli on Wednesdays, Fridays and Saturdays. Similarly, over on the meat menu, sausage with lentils are on Mondays, squid and pajata on Tuesdays, veal shin with peas on Thursdays….you get the idea.

We arrived late enough to where it really didn’t matter anyway what the daily special was, because it had all been eaten up by hungry Romans before us. We sat inside and ordered a jug of house wine, which was not the best, but gave us a good start for the night ahead. After finding out, with considerable difficulty, what there was still left in the kitchen, we ordered. Actually, we didn’t really understand at all what it was that we had ordered until it arrived at the table, since the menu was vague and our waitress a bit too stressed to stop and explain anything. So, we pretty much just ordered one of each of the three things that were still available, remembering what the guy outside had said. “But it’s okay because everything is good.” 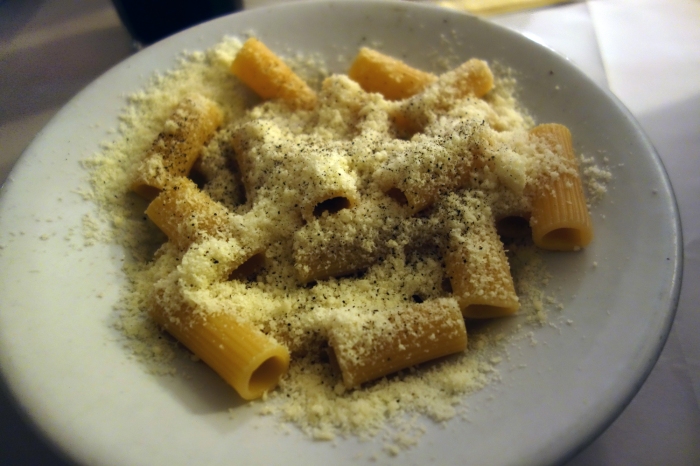 One staple that Trattoria da Augusto (or any Roman restaurant, for that matter) always has lying around is some good old rigatoni cacio e pepe. Tender but al dente pasta with grooves that trap the tangy grated pecorino nicely. Black pepper added a nice zing to this dish, rounding out the nutty, salty nature of the cheese. Can’t get much simpler than this, but when it’s prepared right, it can be exactly what you need. 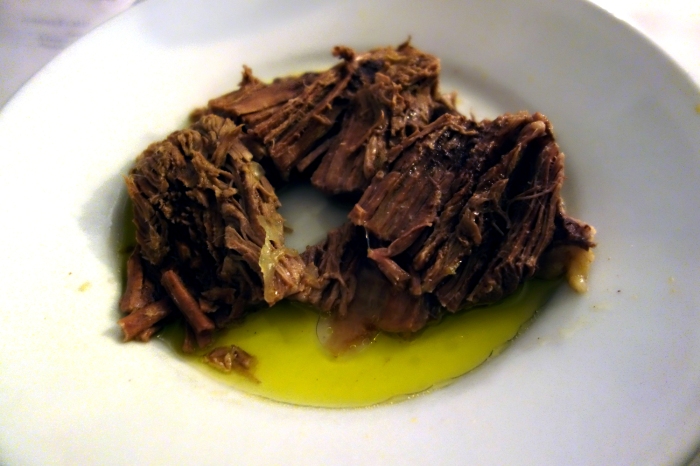 At my own grandmother’s house, I’m forever surprised at how delicious some simple roast beef can be when it’s made with love and attention to detail. The bollito di manzo is 100% no-nonsense nonna food. Three chunks of beef rump boiled in a flavorful broth of what I’m assuming was plenty of vegetables and herbs, snatched out and served on a plate, with its jiggly, quick-melting fat cap still on. The meat fell apart into juicy shreds in my mouth, packed with flavor and cooked with care. 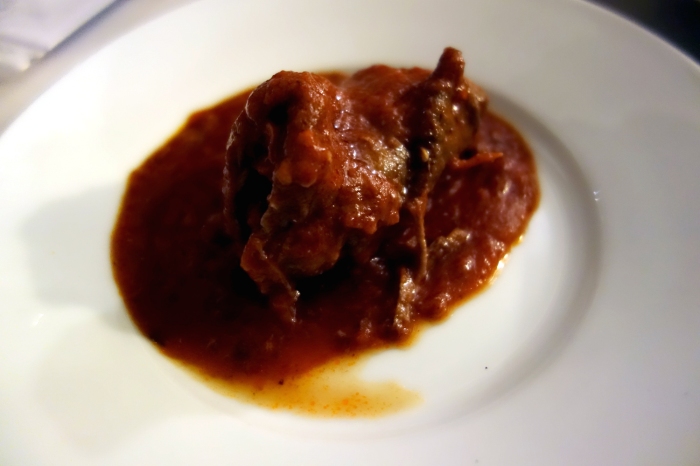 And finally, another Roman thing: involtini al sugo. Thin slices of beef layered with a thin slice of ham and veggies, rolled up and cooked until tender in a vibrant red tomato sauce. The flavor of this sauce was tremendously comforting, leaving us to sop it up with bread, long after the roll had disappeared.

Noisy, laid-back, no-fuss, cash-only. Our meal was 30 euros in total, carafe of wine and bread included. The total was added up on our table’s paper cover. Not bad for simple, yet delicious and hearty local fare. Trattoria da Augusto is a great way to experience a family-style Roman meal without actually having a Roman family in Rome to share a meal with.