A while back I convinced a few friends to join me at the Hungarian Sausage Festival, thrown by the Hungarian American Federation inside of some Ukrainian Orthodox church out in Silver Spring. It was $15 just to get in, which was a bit of a rip off, especially considering how many free festivals happen around D.C. on a daily basis. It was indoors on a beautiful spring day, which was a bit of a letdown. There was a completely bogus mustache competition (2nd main reason I went), which featured regular Joe Shmoe’s, who just happened to have a bit of facial hair, competing against one another. Otherwise the dancing and music were nice and showing my friends the different types of imported kolbász (sausage) and tepertő (deep fried pork skin) was fun as well.

None of the food or drink was included in the entry price but, well, the latter were the #1 reason I was there, so I decided to get a lángos and a kolbász to split with my friends 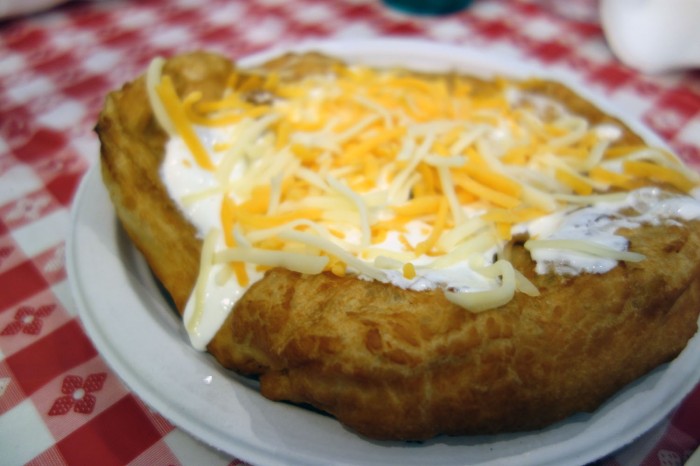 South Asia has the paratha, the puri, the vada. Bulgaria has mekitzi. In France there is powdered sugar dusted beignets. Akara in West Africa, bannock in Canada, frybread from the Native Americans. Sopaipilla in Chile. Pastel in Brazil. Kleina in Iceland. You get the idea. But served this way, it’s lángos, Hungarian and Hungarian alone. Seeing it made brought back plenty of fond memories of childhood. When I was little, and life was so much less complicated, my family would stay at our summer house near Balaton, where the ginormous silty lake would be the one and only program of each sunny day (as opposed to board games inside on the rainy ones). Lying in the sun, renting paddle boats or floaties to dive off of, searching for frogs and turtles in the run-off water, entertaining ourselves with the waves for hours upon hours, and stuffing our faces with all the different treats wheeled over and sold off bikes. If I close my eyes and try to shrink down to my 12 year self, I can still hear with utmost clarity some salesperson yelling “Kürtős kalácsot, főtt kukoricát tessék, mais bitte!” in an attempt to get a crowd of locals and German tourists going for the wonderfully sugary, crunchy and yeasty “chimney cake” as well as the equally popular corn on the cob. It was the eating that happened after going back to the house which really mattered, though. My family would sometimes fry up some of the tiny fish we caught in the lake (mostly by my mother, who is part physical therapist part master fisherwoman). Sometimes we’d eat bread with tepertő, cheese, veggies and meaty cold cuts brought over from the nearby store. Other times, if it was nice out, we would fire up the outdoor gulyas-pit and roast szalonna (bacon made of smoked pig fat) and onions on sticks over an open flame, periodically touching the szalonna against a slice of bread, to soak up all of that liquid gold piggy grease mixed with the black char from the onions. Most of the time, my grandfather would take my cousins and me to the ice cream parlor where we each got 2 scoops – the decision would always be a tough one. Or we would get slices of cake wrapped up to bring back to the family, with each relative having a favorite that everyone would know by heart. My grandmother always got Rákóczi túrós. Grandfather always got Eszterházy szelet. I would always go for the vanilla-flavored, sugar-dusted Krémes. A person’s favorite cake in Hungary is kind of like his or her dæmon (Golden Compass). It follows one around and one is associated with it at any and all family gatherings.

But the best post-lake afternoons would be those in which one of my brothers, or another trusted member of the family would be sent out to get everyone a lángos or two, delicious deep fried bread made with flour, yeast and salt. Most would get it “with everything,” which meant doused with garlic water/oil, topped with sour cream and grated cheese. Very few things felt as good after a day in the sun and that silty walter than biting into a pillowy soft, yeasty lángos. The exterior became crunchy from frying, while the inside remained soft and chewy, the heat from the oil cooled by the soft sour cream. Twiggy little teenage girls who would otherwise starve themselves back in Budapest out of the desire to be model-thin like their friends would wolf these down, no questions asked. And despite all the grease from the oil and fat from the sour cream, one would still feel light and flexible after eating one – a fact for which I still have no explanation.

The lángos at Sausage Fest was a pretty good replica, chewy and crispy, garlicky and creamy from the cheese and sour cream. Easy to tear apart into bite-sized shreds and easy to share (in theory). It also felt especially nice being able to look up at the lady making it and say “mindennel” (with everything), a word that transported both of us back into that little lakeside stand where a freshly made lángos costs 50 cents instead of being in some church in the the U.S. capital where they go for $4.00. Nostalgic smiles all around. Crazy how a piece of fried dough can elicit such a response. 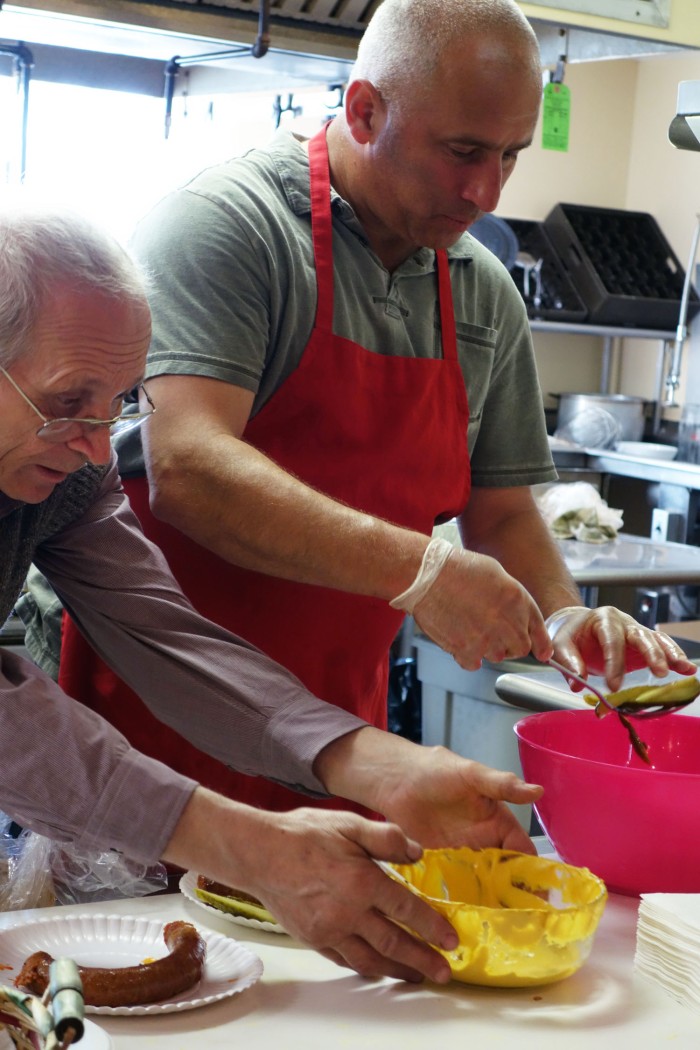 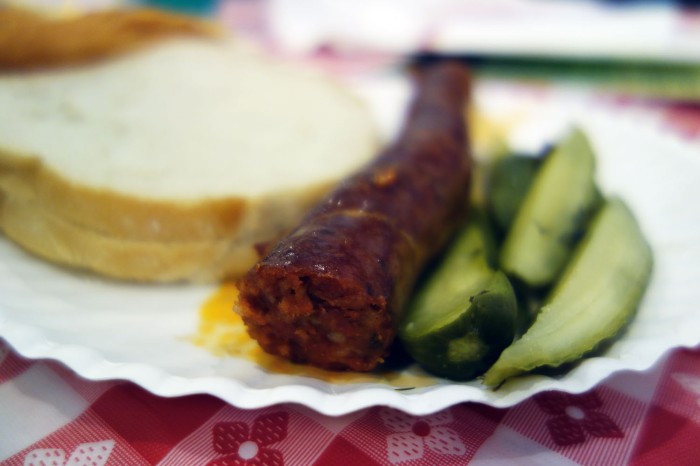 Next up, Csabai smoked pork sausage, thoughtfully plated with a slice of yeasty, delicious bread and a spear of dill pickled cucumber. I usually prefer this type of kolbász uncooked, as a cold cut to pile slices of onto bread rather as a hot item, since it loses some of that awesome spicy, smokey paprika flavor when cooked. Yet, the meat remains juicy, if not a bit stiff, in the very thin casing. Pickles were crunchy and great for cleaning up the bright red grease, of which there was plenty. Bread helped soak up some of the latter as well. In terms of mustard, I would’ve preferred the hot white Russian stuff my dad usually gets, because this one was more acidic and sweet than spicy, but the sausage didn’t really need a condiment anyway – these should be saved for the paprika-free and less flavorful wieners.

The worst part of the mustache competition, was that some regular dude – and by that I do mean non mustache specialist – who didn’t even put effort into growing a work of art on his face received an entire Dobos torta on a pretty doily as the prize. This killed me, because I haven’t had any of these charismatic cakes (also mentioned above) since last time I was home. Hungarian bakeries don’t exist outside of Cleveland and the Austrian ones only tend to have their crappy Linzer– and Sachertortes. Dobos torta is a quintuple layered cake with four layers of milk chocolate buttercream between slabs of firm piskota dough and topped with overlapping triangles of crunchy, caramel which is impossible to break with a spoon or fork and which I consequentially usually just remove, lick remaining buttercream off of and take big bites of either before eating the moist body of the cake, or simultaneously. Tough seeing this thing picked up and carried away by some unappreciative random who I don’t even think was Hungarian at all. My sighs of nostalgia and heartache were audible. When my friends asked about them I answered in few words, since it’s too much to explain anyway. The last time I hung out with my grandmother out in public before she passed away, like two pretty ladies out on the town, putting down the dollar billz (well, forintz) to treat ourselves to something nice, involved a Dobos Torta at the charming Dunapark. (It also involved a Gesztenyés krémes, the creamy vanilla egg white fluff thing I usually get, but with chestnut puree.)

Since living in D.C. I’ve felt more Hungarian than I have in a while. I’m not sure whether that is only because of my job or because of the proximity of the embassy or because I actually have Hungarians besides my parents (an one friend over What’s App) to chat with in my native tongue. Whatever it is though, it feels quite nice to be part of something, and festivals like these, however crowded, awkward and overpriced help remember times when I was truly happy and squeaky clean at heart.

One thought on “Hungarian Nostalgia at the Sausage Festival”