Despite the grim disposition of some of its people, Budapest is all around a cheerful place during the holidays. Many of the main squares (Deák, Ferenciek, Vörösmarty) tote jingle bells all month and light up with colorful booths selling traditional Yuletide merchandise: gingerbread figures, wool slippers, Christmas tree decorations. But I tend to walk right past these on my way to the food stalls that sell sticky sweet kürtös kalács (chimney cake) glittering on the spit and ladles full of spicy mulled wine from cauldrons boiling and bubbling forth steam into the cold winter air. There are meats aplenty, fresh from the pig slaughters that happen around this time out in the countryside. There are sausages made with blood, liver and ground shoulder. There are trotters marinated in apple vinegar and smoked fatback, the best cuts from the underbelly. There’s also pink ham served with mustard or horseradish, smoked shoulder and butts in chunks for sale. The centerpiece is a beautiful piglet roasted whole on the spit until the skin gets nice and crunchy. For dessert there are stands serving an array of marzipan bonbons, classic cream puffs and rétes (strudel) stuffed with poppy seeds, sour cherries, or sweet quark with raisins. 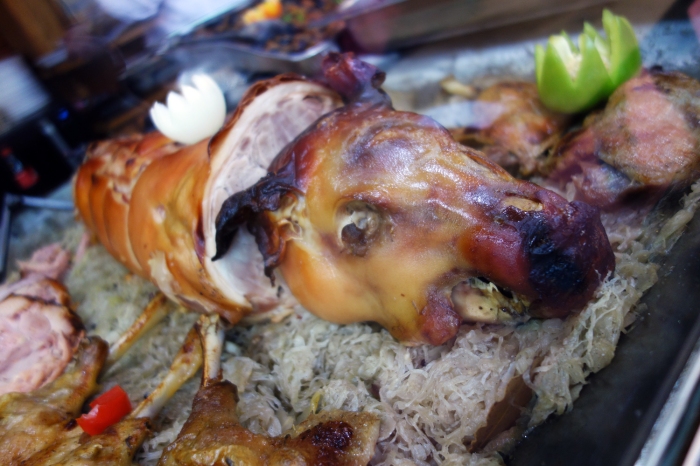 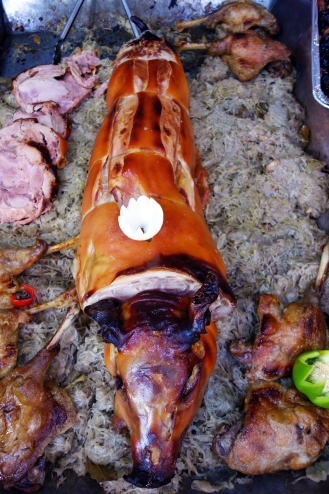 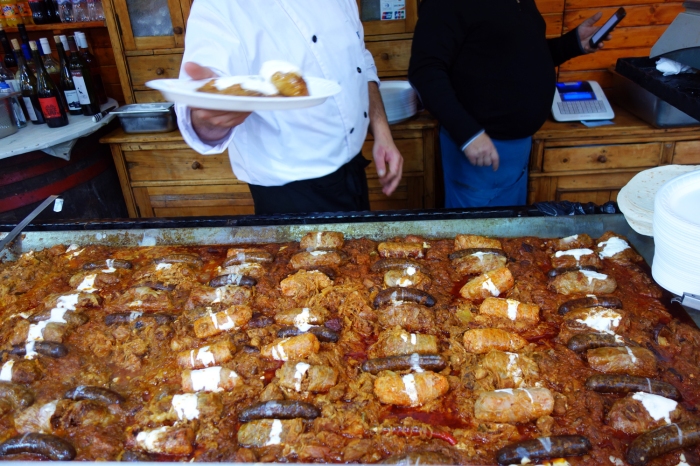 And then of course there’s töltött káposzta, whose time to shine is Christmas and New Year’s Day. Pickled cabbage leaves are wound around a mix of rice, minced pork and onion seasoned with quite a lot of paprika. It’s clearly what the Turks call sarma, a “wrapped thing,” whose resemblance to its culinary forefather (Ottoman) is uncanny. The plump little logs are tucked in tight side-by-side and cooked together. It’s served with additional stringy sauerkraut as well as bits of smoked shank and country style sausage buried in between. On top is a generous dollop of sour cream that mixes with the paprika-seasoned, red grease to add a creamy base to the sour cabbage. Some recipes add tomato and others a roux to thicken the base sauce. In Transylvania they do it with smoked bacon and dill and they layer it in a pot horizontally to cook.

My brother, his wife and I visited the market at the base of the Szent István Bazilika, a space abuzz with Christmas shoppers and Christmas food eaters such as myself. The stuffed cabbage there was quite beautiful with plenty of smoky meat and tender rice wrapped in slippery smooth leaves. It was clearly cooked with lard and dripping with wonderfully flavorful juice to dip bread into. Last time I had this was at the Smithsonian Folklife Festival where the recipe was presented during a cooking demo. As the participant supplies person for the Hungarian Culture program I had actually helped source the ingredients for the recipe. It didn’t quite turn out the same, but it came close enough. 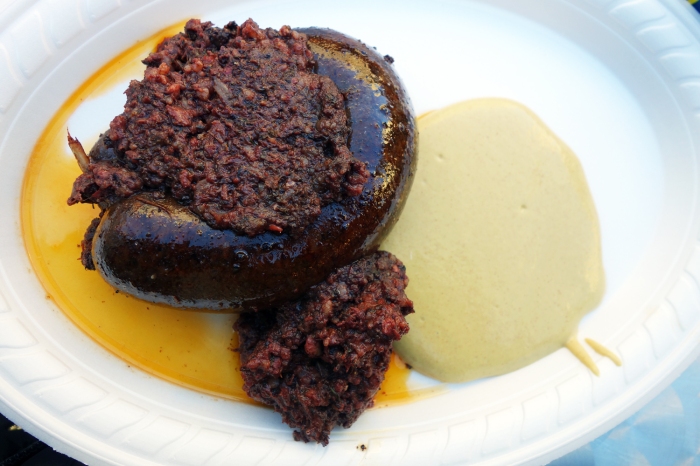 From the array of glittering meats we chose a véres hurka (blood pudding) and a házi kolbász (homemade sausage), both of which came with a pool of hot mustard. The blood sausage was delicious, very nicely seasoned with paprika, marjoram and black pepper. There was just enough of the seasoning to leave the slight metallic sweetness of the blood in tact. The texture was great, wetter than most Hungarian versions that tend to use too much rice and dry out as a result. They’re still usually better than Irish blood pudding, which is far too dry and chewy for my taste. But it’s far from the perfection of Argentine morcilla, the only version I’ve had that truly lives up to the name of “pudding” with the amount of blood used. The casing also has less crunch than the gaucho version and it’s missing that taught, tight, cherry skin snap when sliced into. It’s a bit chewy and loose instead, difficult to cut, a wrinkly sag. Nevertheless, the filling is what matters the most and in this case it is flavored perfectly. It has a rich and moist texture that floods the mouth and coats it with a layer of smooth, pepper and blood flavored fat that harmonizes with mulled wine beautifully. 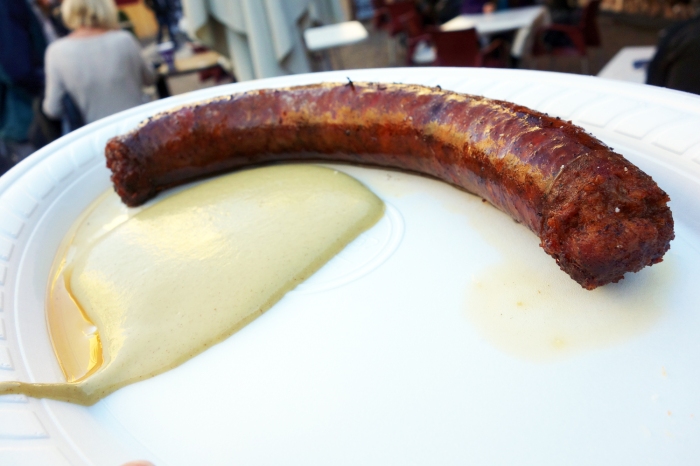 The homemade sausage is delicious too. In this case there’s more paprika and a bit less pepper so that the slightly sweet vegetal flavor of the paprika comes to play with the otherwise savory meat. The casing here is in fact very tight and snappy, though the meat inside is more crumbly and chunky than a smooth, moist pudding. When bitten into, sizzling paprika-infused grease spritzes out of the hot casing, burning the tongue and leaving behind a spicy, salty flavor. The latter is cleaned up by the cool burn of the white mustard. 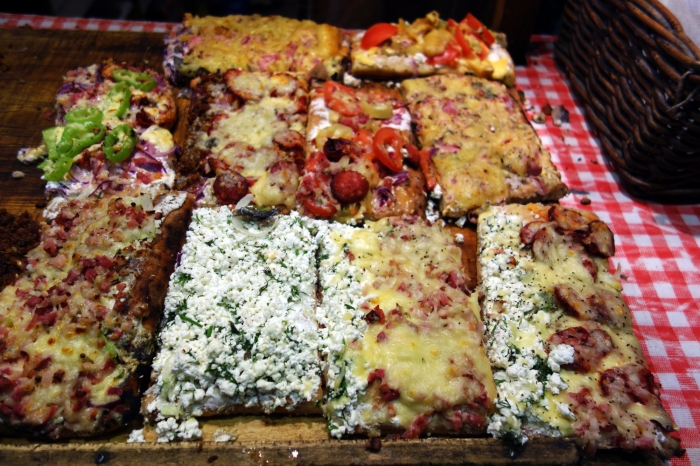 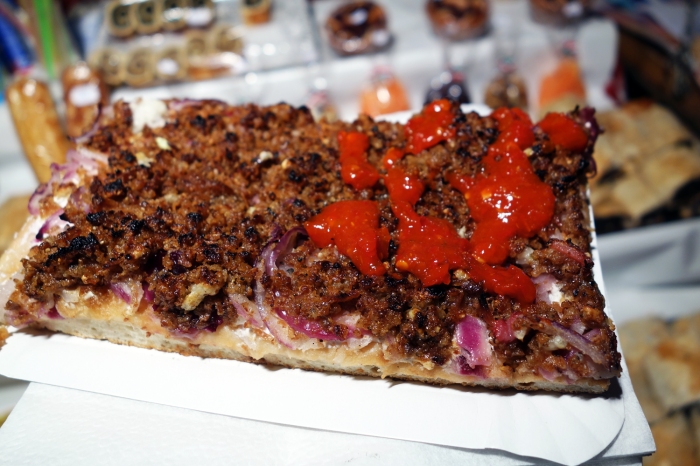 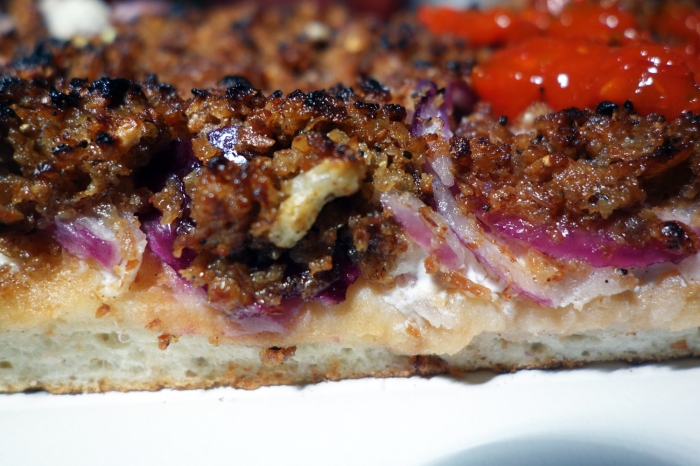 In Hungarian “lángos” refers to a thin, round plate of fried dough brushed with garlic oil and topped with sour cream and shredded cheese. It’s a truly beloved dish, one that reminds Hungarians of sunny afternoons at Lake Balaton or Sunday morning grocery shopping with grandma at the market. Summer is its season to shine. Although deep-fried bread dough with stuff added has its counterpart in pretty much every cuisine around the globe, the combination of garlic oil, Edam cheese and sour cream is perhaps uniquely Hungarian. Lángos prepared any other way or anywhere else in the world just does not taste the same. During the winter the fluffy, dainty, deep-fried lángos is replaced by it’s cold weather version, known as kenyérlángos (literally: “bread lángos”), or kemencés lángos (literally: “brick-oven lángos”), or langalló (which is just another name for the thing and has no literal translation). The latter is often referred to as “Hungarian pizza” though the bread base is doughy and thick, more like focaccia than the crust of a pizza pie. During the holidays they’re sold with a colorful array of toppings: quark cheese, melting cheese, veggies, ham, bacon. Point to one, gesture “one”, smile at the guy and he’ll throw it in the oven so that the bread base warms through and the toppings toast up. Then drizzle on garlic oil or Erős Pista, Hungary’s Sriracha made with hot paprika.

I got my favorite, with goose cracklings called libatepertő, because libatepertő is so swell in all of its forms. I’d happily eat a whole bag full walking home from a market; indeed, it’s not something I haven’t done. The toasted bits crunch before they melt in the mouth, leaving behind a nuty, caramelized flavor and surprisingly little excess fat. Of course, it’s practically all fat but it doesn’t feel fatty or heavy in the least. On this particular lángos the topping was in perfect proportion to the bread, which was chewy and thick to offset the crispiness of the cracklings. A few slices of red onion woke up the flavors with its sting. I poured on a bit of spicy Erős Pista for additional heat and sweetness.

When in Budapest during December, there’s no better place to eat than a holiday market (unless you have a Hungarian grandmother in which case that place is her house, and unless you’re a vegetarian in which case it’s just not worth it). The food is warm, filling and packed with flavor. Booze (pálinka) and mulled wine flow freely. It’s a great way to spend a chilly afternoon.