I didn’t do too much research on the San Francisco food scene prior to arrival. I didn’t watch Bourdain or skim Eater or even read that one helpful paragraph before restaurant recommendations in the Wikitravel “Eat” section. I had full confidence that our local host and my dear college friend would know to show me the good stuff. I also really didn’t want to make this trip about me dragging friends around to places I wanted to try, and making them wait for me to take pictures while their food went cold. So I left it up to him.

The one thing I did faintly remember hearing someplace is that the dish I have come to know as a burrito (from having it at Anna’s Taqueria and Boca Grande) is actually a style of burrito that was supposedly invented in the Mission District of San Francisco. On our first day I told my host friend I wanted one and he took us to a place called Taqueria Cancún which, reportedly, has one of the best burritos in town. He explained to me that burritos in the Bay Area are kind of like taquitos in San Diego or Cuban sandwiches in Miami or cheesesteaks in Philly – each circle and each die-hard gourmande has a different opinion on where to get the best version and why. Taqueria Cancún seemed like a pretty common answer to the Mission burrito query.

It was a good sign that there were multiple types of burrito on the menu and even a better one that 90% of people in line were going for one of these. Tacos were there to as an alternative option, but clearly the thing to get here is just what we came here for. Our burrito came with comp. chips and a spicy, tangy salsa verde which hit the spot as we waited.

We ordered a Super Burrito with carne asada as our meat option. Despite the name it was a standard size, enough for two small ladies to share for lunch or a manly man to pop as a snack during the day. A slightly toasted tortilla with a flaky crunch on the outside wrapped tight around around smokey, grill-charred carne asada, fluffy-soft rice, pinto beans, very fine bits of onion, gooey cheese as a binder, some cilantro for that citric twang and a ton of very ripe, very flavorful avocado along with runny, tangy Mexican sour cream (or crema?) to hydrate and add some lusciousness. Proportions were key to making this burrito great. The tortilla was thin enough to really only be there to hold things together while also adding a little crispiness. The steak was consistently tender, without any chewy old bits hanging out the ruin the bite. The avocados were in the perfect phase of aging, buttery smooth and creamy, almost melting together with the warm rice. The burrito was not over-loaded with beans, which I appreciated. Unlike most burritos I’ve had where the beans and rice appeared as a single fused beans-and-rice ingredient with the beans becoming mushy and overpowering the flavor, the beans in this case just kind of speckled the thing, appearing here and there for a burst of soft protein with a plump bite to them. The sour cream was just enough to bring everything together and add some acidity. Flavorwise, smokey meat dominated with some of that green sweetness of avocado rounding the latter out. The only thing I didn’t taste much of was the salsa which was supposedly also in there. No problem though, since salsa is free and easy to re-apply to each bite. Yum!

Just to test versatility, I also ordered two tacos, the first of which was the Carnitas Taco. It was okay, though I’d really recommended sticking to the burrito at this place. The corn tortillas were fresh, correctly double-layered which a nice graininess to them. The pork carnitas were also quite good, fried crispy on the outside but staying juicy and moist within. There was also chopped fresh white onion, some vibrant green cilantro and a slightly spicy tomato-based salsa topping the meat. The salsa was flavorful and hydrated the carnitas, especially some of the drier shreds which needed it the most. I thought there was a bit much liquid, though, and it made the soft tortilla soggy and difficult to pick up. Flavorwise on point, but structurally a tad unsound.  Not bad, though definitely not the best carnitas taco I’ve had. 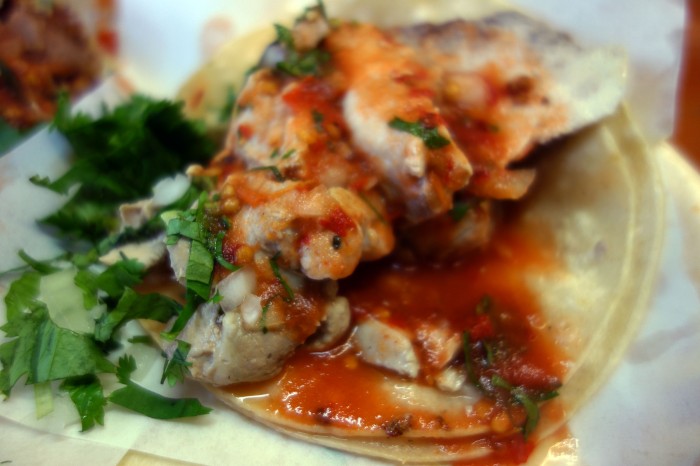 The Taco de Sesos had less of the salsa, when in fact it probably needed it more than the Carnitas. In this case, the meat topping was beef brain, which had that charismatic innard twang-alang about it, that flavor which reminds one of the skull juice the brain has been marinating in. It’s a tough taste few can handle and even I need a whole lot of lemon juice or anything acidic to brighten my mouth up during or after. It would’ve been the role of the salsa to do this but there wasn’t enough for how much brain was topping this taco. The texture of the meat was okay, though I usually prefer my sesos to be juicier and fattier. Though creamy when bitten into, these were a bit too firm, reminding me instead of chicken livers and kind of wishing they were the latter instead. Not bad, though definitely not the best brain taco I’ve had.

It becomes obvious when eating at Taqueria Cancún that the place must be a staple late-night hangout, with its burritos serving as the life sustaining drunk food for young’uns making merry around the Mission. It has that air of reverence about it. One can tell it’s the setting of many great stories told the next morning to those who weren’t fortunate enough to be there. It is also probably the place to recap the night for those who were present. Regardless, the place functions just as well during the day, and their burrito is satisfying even to a sober stomach. Warm and juicy, fresh and flavorful, surprisingly light for the size.