Before I travel to a place, there is a pre-departure processes I feel almost obligated to carry out: watch the Bourdain episode, browse through the city’s Eater Top Stories, do a quick search on Thrillist and SeriousEats (if in the U.S.), and consult with anyone I might know from there. In the case of San Diego, Tony hasn’t shot anything there, all three websites really rave only about various Guy Fieri sightings (which serves only to dissuade me from going to a place), and most of my friends from the city did not have much to say besides the fact that it is close to Mexico “…so I guess the Mexican food is alright.” Upon further investigations, I discovered a few things about San Diego’s food scene and culinary history on my own: a very robust microbrewery program, fake-ass Italian in “Little Italy,” some pretty decent Baja fish tacos, good Pacific Coast seafood, and a reputation for having invented the taquito. Since I’m cursed with the drive to try stuff where they are claimed to have been invented (but which are often actually not from there at all), I ordered a taquito as my very first dish ever in San Diego. I was overall pretty disappointed but decided to give it another chance and go to the very place that prizes itself on the invention of the thing, El Indio.

The place was founded in 1940 as a tortilla factory where fresh corn tortillas were made by hand. The owner got creative when workers in nearby factories started asking for ready (and easy) to eat lunch stuff. The taquito was born. They now have a significantly longer menu, including the classics – tacos, enchiladas, tamales, tostadas – as well as some of that good old fashioned cheesy American stuff putting on a Mexican-sounding name to seem more exotic – chimichangas, burritos, nachos… Despite this broadening of their menu, they stay true to their roots in that they still make fresh corn tortillas by hand (and with a little help from a tortilla presser). They sell these on their own in the morning, while also using them in the kitchen throughout the day. The place is run by the founder’s son who is currently raising his two daughters to keep the business in the fam. Apparently, the restaurant is famous for having assembled care packages to soldiers fighting in ‘Nam, packages which became so popular that local politicians started requesting them to be sent to D.C. Presidents have eaten their stuff. But, most importantly, they invented the taquito.

Vats of corn masa ready to be freshly pressed into tortillas.

Having had kind of a meh experience with my first ever taquito, I was nevertheless eager to give it another chance. I got El Indio’s Shredded Beef Taquito, which came with lettuce, cheese and guacamole. For me, the fried corn tortilla was uncomfortably chewy, making it awkward and a bit painful, even, to eat. The thing was wrapped around what really could’ve been anything three times, suffocating the filling to the point where I could barely recognize it as beef. The individual bits of beef I pulled out were not bad, but the texture of the meat disappeared completely inside the taquito. The guacamole was just okay and didn’t really do much besides glue the plasticky bits of shredded whatever cheese and lettuce into a goop that topped the taquito and made it even harder to eat. Apparently this is the creme of the taquito crop. Maybe I’m just not a taquito kind of gal. Someone told me afterwards that the one to try was actually the shredded chicken taquito, though I really don’t think this would’ve made a difference.

Next up, something worlds better, a Soft Carnitas Taco, topped with guac and ranchera salsa. This is where those house-made fresh corn tortillas come in – they were wonderfully soft, grainy and even a bit uneven here and there, which erased any memory I might have had of crappy pre-made and processed tortillas in my past. The thinly sliced pork was great too, juicy and fatty and real, not chewy in the least. The flavor was deep enough but maybe a touch over-salted. The salsa went well, the tomatoes sticking to and breathing some moisture and acidity into the pork, though it might’ve been nice to have the salsa be cool, to contrast with the warm meat. The guac was okay but didn’t stand up to the meat enough and ended up just providing its mushy texture and a slightly soapy flavor to the mix. The two main characters – tortillas and meat – were truly delicious, though, and that’s all that mattered to me in this case. 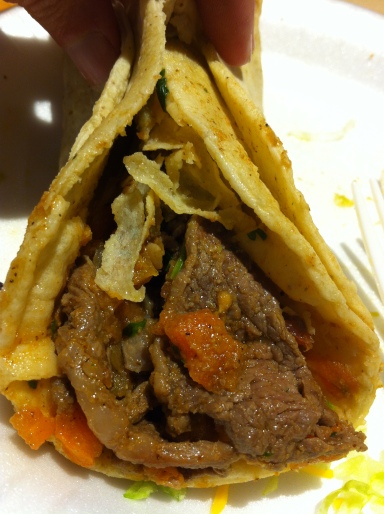 I also tried the Carne Asada Burrito, which came with the same ranchera salsa, cheese and guacamole.  Apparently this is one of the more popular picks and I can see why. The chunks of beef were tender and moist with a lot of flavor. The burrito was packed tight with the stuff, which was stuck together with gooey melted cheese and  smooth guacamole. Tomatoes added a nice moist plumpness and a bit of acidity to wake up the flavors. Each bite was satisfying, with meat bursting forth from a flour tortilla thin enough to let the meat shine but thick enough to hold everything in. The tortilla got wet and a slippery on the inside, and softened a bit, but it managed not to get soggy. 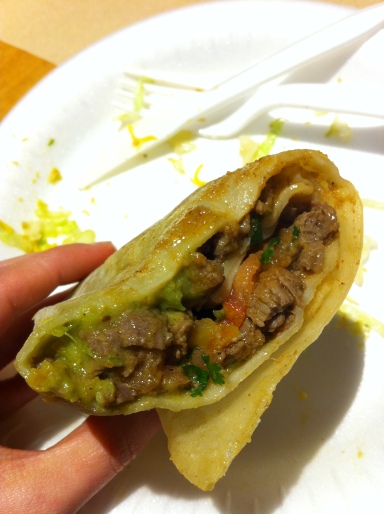 Hated the taquitos but enjoyed everything else, including the friendly, helpful service and the old school authenticity of the place. It’s nice to see big vats of tortilla batter waiting to be toasted up behind the counter and it’s also nice to see big vats of house-made chips sold in huge plastic bags to take away. Hopefully this article proves helpful in the pre-departure restaurant check of someone planning a visit to San Diego!