When I was invited to dine at Piola on 14th the other night, I felt a dash of déjà vu. I couldn’t shake the feeling that I had been there before, yet in a different time and different environment. It wasn’t until I found out that Piola has Palermo and Barrio Norte outposts in Buenos Aires that I understood why it looked so familiar. The restaurant started in Treviso, Italy and now actually has 38 locations worldwide. Instead of trying to hide their chain character, they proudly showcase their international edge by incorporating culinary elements from each of their locations into their menu. South American culture is fused firmly with Italian, for example, in many of their pizzas as well as their cocktail creations.

While some items can be found in any of their restaurants, each location also has its own set of offerings that are specific to it. The Columbia Heights Piola hosts a “No Limit” Pizza Brunch every once in a while which features all-you-can eat wood-fired pizzas and bottomless sparkling drinks or sangria. There is also a daily L’Aperitivo Italiano which is basically an Italian type of happy hour, where guests can enjoy complimentary finger foods and discounted drinks. I went to try one of their new October National Pizza Month specials, but ended up tasting quite a few dishes.

One of Piola’s signatures seems to be the Rio de Janeiro pizza because of its unique and rare key ingredient, the catupiry cheese, flown in from Brazil. It also has uneven shreds of moist, oven-baked and pulled chicken breast along with a very light layer of tomato and mozzarella. I’ve never had catupiry cheese or ever heard of it before, but I enjoyed the creamy mascarpone-type dollops of the stuff. It wasn’t too flavorful, but the patches melted in my mouth and added a nice smooth consistency to contrast the tender, fibrous protein of chicken breast. Overall a very mild pizza with a nice, crunchy thin crust – made a bit more interesting with the option of adding some of the house habanero oil provided. As I found out from the owner, this pizza is more of an ode to Brazil, one of the first stops made by Piola in South America, than to the restaurant’s birthplace of Treviso, Italy. 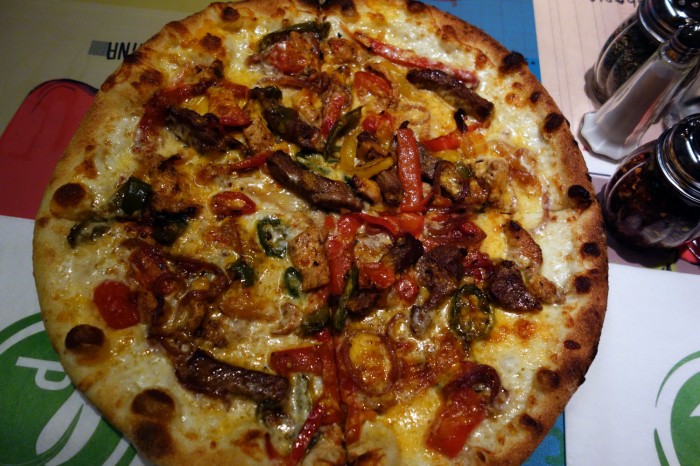 In preparation for National Pizza Month (October), three new pizzas have temporarily been added to Piola’s menu. One of these is the Guadalajara, a meaty, filling beast with a mix of mozzarella and cheddar, sauteed jalapeno, sweet peppers, onions, tomatoes and both chicken and beef strips grilled to a tender point. Colorful and filling, if a bit busy. This pizza gets plenty of spice from the jalapeno as well as caramelized sweetness from the bell peppers. I think the chicken on this one was pushing it a bit and the beef would’ve done perfectly well on its own. But I guess it doesn’t hurt to get a little more protein per bite. 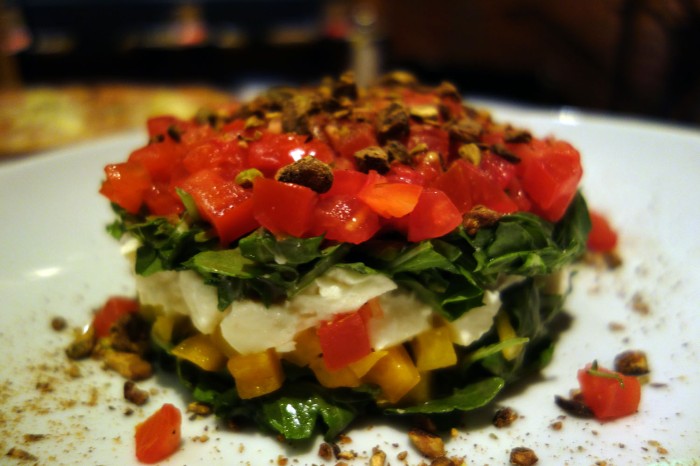 The most colorful dish I tried was definitely the Roka Cabana, a layered tower of arugula, diced mozzarella, diced tomatoes, diced yellow bell peppers, all tossed in a sweet pomegranate dressing and topped with crispy toasted pistachios. This one is an ode to Turkey, as I learned, one which seeks to merge Turkish and Italian cuisines. The veggies in this dish were nice and fresh. The peppers had a crisp snap to them and the tomatoes were juicy. The fior de latte also had a very satisfying, gummy texture to it and was clean in flavor. Nutty, crisp pistachios on top provided good contrast to the soft, fresh ingredients it was topping. I didn’t care too much for the pomegranate dressing because it was a bit too sweet for my taste and weighed down the delicate leaves of arugula. I belong to the sect that does not like fruit mixing with savory salad, though, so those who throw strawberry slices and mandarin wedges on top of their lettuce might think differently about this one. I also wish the cubes of veggies and cheese had been left slightly larger. As it was, the small dice on the veggies and gummy, chewy mozzarella masked the natural texture of these ingredients and ground them all into a baby-food type consistency. 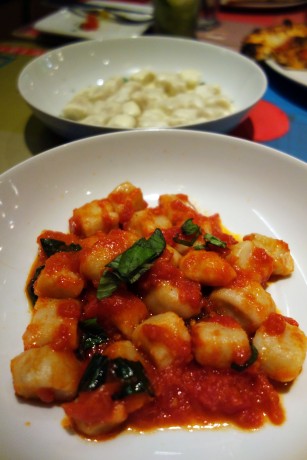 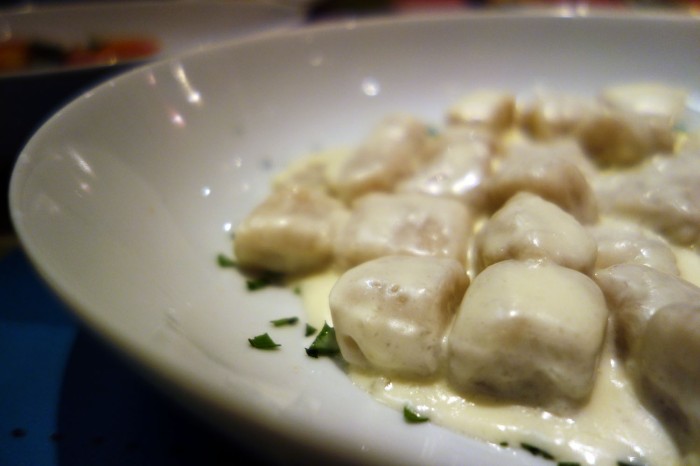 In addition to its pizzas, Piola prides itself in particular for its house-made red and white gnocchis. The white is a Gnocchi Legnano, with a creamy four cheese sauce – mozzarella, brie, gorgonzola, parmesan. This dish was great texturally. The gnocchi had a slightly chewy exterior but a thick, smooth, moist interior which made the mashed up potato very present in the dough. The sauce was thick and creamy, with a very comforting and smooth texture. Flavorally though I just wish there was more gorgonzola than mozz in the sauce as it was a bit bland and needed more funk and acidity to make it interesting.

The red Gnocchi Pompei had the same wonderfully chewy, creamy-smooth, house-made potato dumplings topped with chunky, bright tomato sauce and a ton of fresh basil plucked and thrown on. I enjoyed the tartness of the tomatoes and felt it cut the gummy texture of the gnocchis well. The flavor of basil was a bit overwhelming and the herb forced its flavor into the sauce instead of subtly suggesting it, as I would have preferred. Definitely my favorite of the two gnocchis and my probably my favorite dish of the night, though. 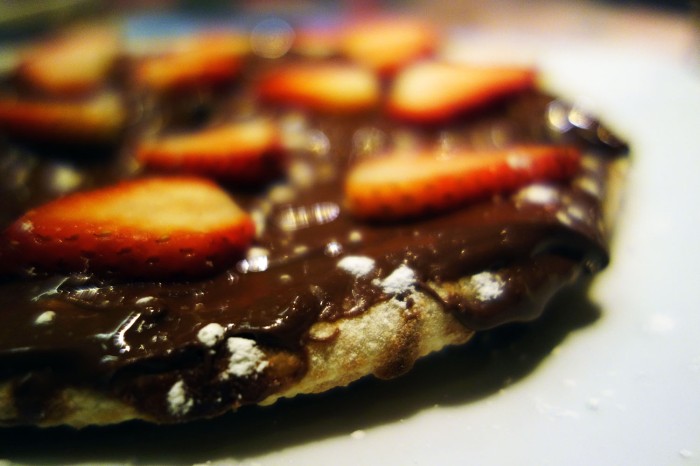 Another October pizza special is the Fresa y Chocolate, a dessert pizza made with a thin, crispy, flour-dusted crust topped with a thick, very generous smear of Nutella, some fresh slices of straberry and powdered sugar. Pretty delicious and reminded me of the many Nutella toast breakfasts of my happy childhood. The nutty, sweet spread melted in patches into a creamy, smooth blanket of chocolatey hazelnut and the tart strawberries lifted it up from becoming overwhelming, doing a better job at this than the ever-popular banana would’ve done. Not a very complex dessert and I’m not sure I’d order dessert pizza after pizza, but good on it’s own and still good for breakfast the next day.

Although the menu seems a bit chaotic to me with all the different nationalities represented, there’s definitely never a dull moment at Piola.