Not too long ago I attended a special progressive dinner, part of a weekly series called “West End Wednesdays.” The idea was to showcase the restaurants of a neighborhood that is often overlooked as a dining destination. The participating restaurants were Westend Bistro, Blue Duck Tavern, Marcel’s and Ris. At each stop we were treated to a dish paired to a cocktail or a glass (or two) of wine. I wrote an article about the experience for The Daily Meal. But I also wanted to put up a little slide-show of the event.

Our first stop was Marcel’s by Robert Wiedmaier, where we started off with a sparkling rosé Crémant de Bourgogne by Michel Sarrazin. We also had a glass of Domaine Santa-Duc “Les Quatre Terres” Côtes du Rhône Village, which was wonderful, if a tad overindulgent for the appetizer stop. 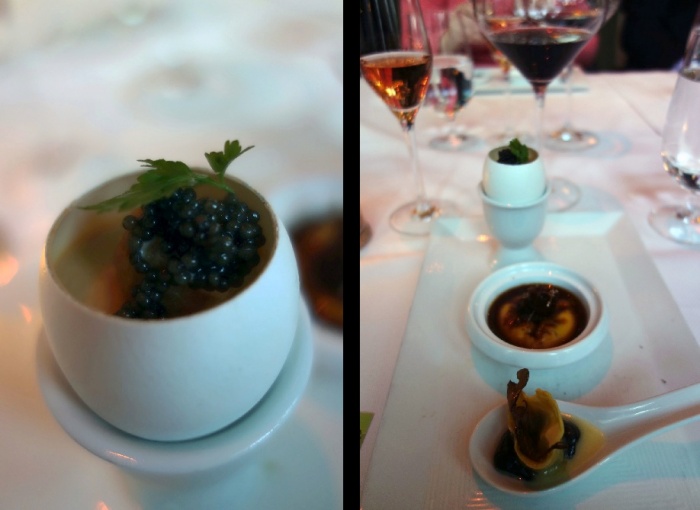 Marcel’s was the appetizer stop. We had a triage of hors d’oeuvres: There was a tortellini stuffed with duck confit on a bed of black truffle purée. Next to it was a stuffed morel with a mousseline of foie gras. Finally, an egg shell filled with lobster custard, topped with crab and Osetra caviar. 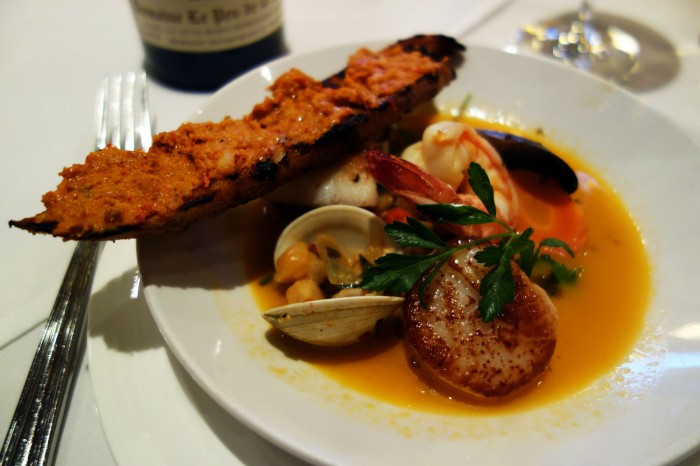 Our next stop was Ris, where Chef Lacoste herself presented her Portuguese Seafood Stew, a colorful mix of buttery soft scallop, cod filet, shrimp, octopus, clams, chickpeas and linguiça. The latter is sourced locally from Stachowski’s Deli. Bruschetta smeared with a house-made romesco is served on the side. Wine Director Leah Cheston chose a slightly sweet Domaine Pichot Vouvray, a 100 percent Chenin Blanc whose peachy, floral sweetness expertly balances the smoky linguiça. Usually I’m not into sweet whites but this one paired perfectly. 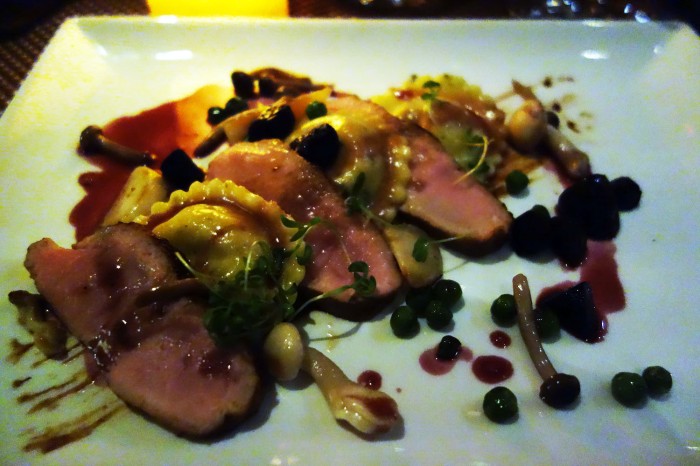 Third stop: Westend Bistro. Here we had slices of roasted veal loin fanned out onto a plate with foie gras ravioli, chanterelle mushrooms, tender baby turnips and a crimson veal demi-glace. Paired with the veal was a round, tannic Villa Ponciago “La Reserve” Beaujolais. 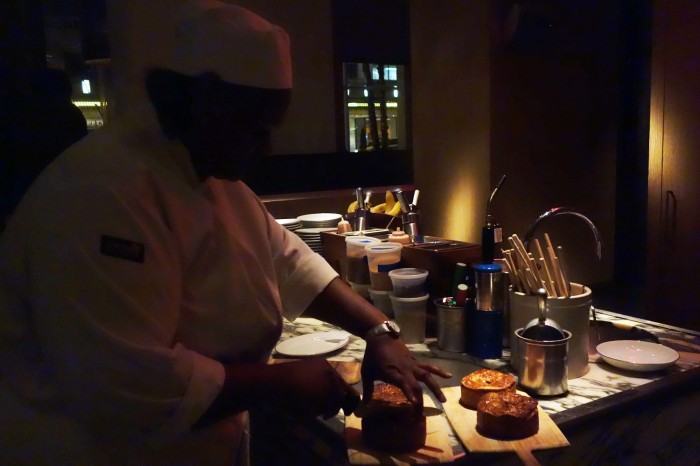 And for dessert, Blue Duck Tavern’s signature Apple Pie. The flaky, buttery crust, drizzle of apricot glaze and homemade vanilla bean ice cream is a wonderful comfort-food classic. The pie was paired with an Apple Bourbon Cocktail made with Buffalo Trace, Baron Calvados, apple cider and bitters. While my group was indulging in apple pie I snuck into the kitchen, only to stare at the beautiful, custom-made, blue Molteni range they’ve got going. I also hung out in the pantry and watched the pastry chef make petit fours and pie.

Reservations for West End Wednesday can be made in advance on their website. It’s sold out for all of April, but maybe you’ll have some luck in May?

One thought on “Eating Good in West End”