Daikaya has a lot of die-hard fans and I guess I can understand why. It’s cool, the menu is versatile and the venue is geographically accessible. The kitchen stays open late and plays music loud enough to make you think you never left da club. The izakaya upstairs boasts a creative cocktail menu paired with exciting bites – skewers of beef tongue and quail, Japanese hambugu and fermented veggies. There is also a wonderful donburi lunch menu that caters to a wide range of tastes and is priced quite fairly. The ramenya downstairs is a bit more laid back and offers only gyoza and 5 types of ramen. There’s a Shio, a dark soy Shoyu, a Mugi (Barley) Miso, a Spicy Miso made with shiro-(white) miso and some weirdo vegan miso also based on a Shio broth.

The description of the Shio Ramen drew me to try it. “This ramen most shows off the unique and nuanced qualities of our chintan stock. It is our most delicate and aromatic ramen.” Chintan is a very light, clear, chicken-beef-pork stock traditionally used in Sapporo style Shio. It’s pretty much the opposite of the thick, milky white, porky cream of the tonkotsu broth I adore so much. But as it seemed a house specialty I decided to give it a go. 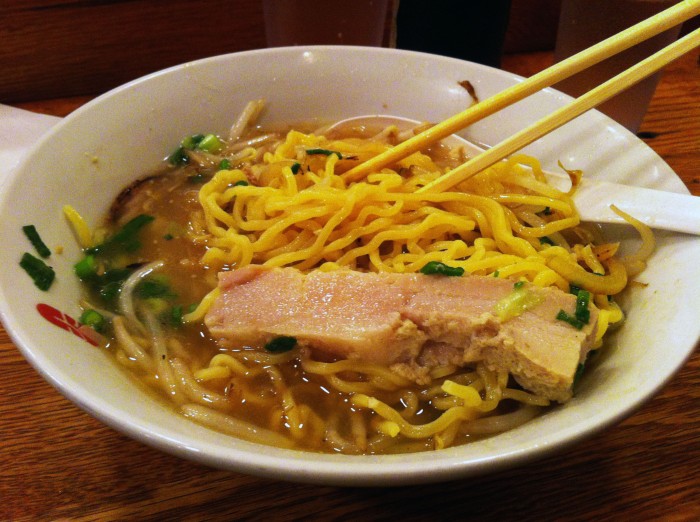 The bowl came with squiggly, dark yellow noodles drowned in the chintan broth and (apparently) topped with chashu, ground pork, wok-tossed bean sprouts, scallions, garlic and nori. There was a choice to add nitamago (soy-marinated soft-boiled egg) for $1.50 but it was apparently not considered a fundamental ingredient of the dish. There were also options to add bamboo, more seaweed, corn (?) and butter. Thinking I was getting a bowl of the house specialty the way the kitchen intended it, I chose to forgo these add-ons. But when our server mentioned I could also add pork belly, my resolve melted readily.

The steaming bowl of noodles arrived at my table and I dipped my spoon deep to get a good cross-section of broth. I closed my eyes in anticipation of meaty, rich liquid and I was left waiting for the flavor to rush over my palate. It never happened. The liquid did carry a subtle white meat sweetness, but it was mostly just salty and one-dimensional and, overall, pretty boring. I have the grand misfortune of a stomach that does not comfortably hold too much liquid, which means that whatever fluid I do consume needs to have flavor enough to warrant taking up space in my belly. (It also means that I’m technically always dehydrated and that I drink my first beer three times as quickly as anyone else at my table – the cause of many an eyebrow raise. ) When I eat a giant bowl of soup, the broth has to have enough character to be worth the discomfort. A good tonkotsu broth has that. Any of my mother’s thick, meat-heavy Hungarian stews also have that. This chintan broth did not. Maybe I’m biased. Maybe I wanted something a bit less delicate. But after eating the whole bowful and hoping the flavor would kick in eventually, I was left wishing that I had switched the broth for my bottle of Ichiban and just ate the solids off the top instead.

The noodles were also a bit of a disappointment. They were far too al dente for my taste, way too tough to chew. They came out in a tight little clump that took quite a bit of wrangling to loosen up. The broth was too oily and not creamy enough to stick to the surface of the noodles, so they weren’t an easy slurp and they kind of separated from the liquid like a wad of pasta thrown into chicken stock. If there actually was chashu in that bowl, it was indiscernible. There was plenty of ground pork, but this was crumbly and dry. I suspect it had not been seasoned at all before being dumped carelessly onto the noodles.. The bean sprouts were charred from the wok, but the blackened patches tasted burnt and bitter instead of caramelized. If there had been some hearty soy or more dashi in the broth, this char could have been overlooked as a charming smokiness but – alas! – no such luck.

Perhaps the biggest letdown was, shockingly, the pork belly. I was expecting hunks of soft yet firm, toned and sexy pig belly with a layer of succulent meat attached and a crispy, tan sear on one side. What I got instead was a block of loose, flavorless fat that resembled a saggy, middle-aged ass on the beach; a pale, ugly rump spotted with cellulite. It disintegrated on my tongue, coating it with an unpleasant, viscous mucus that reminded me of the time I accidentally ate a spoonful of lard, mistaking it for vanilla ice cream, in my grandma’s kitchen in Hungary. Pork belly is usually a thing that brings pure joy to my life and in Daikaya’s Shiro ramen it’s a flabby bummer.

To sum up, I’m not a fan. While I might return to the izakaya for cocktails and stuff like late-night Okonomiyaki-style stuffed cabbages, I’m sure never wasting dime on their nood-soop again. Time to find a legitimate ramenya in D.C.