I arrived to Istanbul with an open mind, with no prior research on what to eat and where. Instead, I allowed myself the opportunity to be surprised by a city that I’ve heard does not cease to surprise. I knew there would be kebabs, the Turkish forefather of gyros, or meat on a spit sliced into pita. I also suspected there would be börek, a greasy lasagna of cheese, meat and phyllo that is prevalent throughout the Balkans. But in terms of street eats or comfort foods I had no idea what to anticipate and I entered into my first night in Beyoğlu with eyes and ears alert. Passing through the narrow alleys of a nighttime “food block” I found neon-lit shops and stunning arrays of Turkish delights on display. There were spice shops and produce carts and roasted chestnuts and corn. People sat outside and drank beer, rakı, or black tea while traveling vendors brought them trays of blanched almonds cooled with mounds of ice. Why ice? Just because.

Easily the most popular snack is the midye dolma, shiny black mussels piled high with buckets of lemon to squeeze over them. Carts, stands and stalls of these can be found on nearly every street and locals line up for them, clutching coins in their palms. I started with these and ended with them too. They’re available at any time of the day. Over the course of my four day trip I stopped six times to get them. 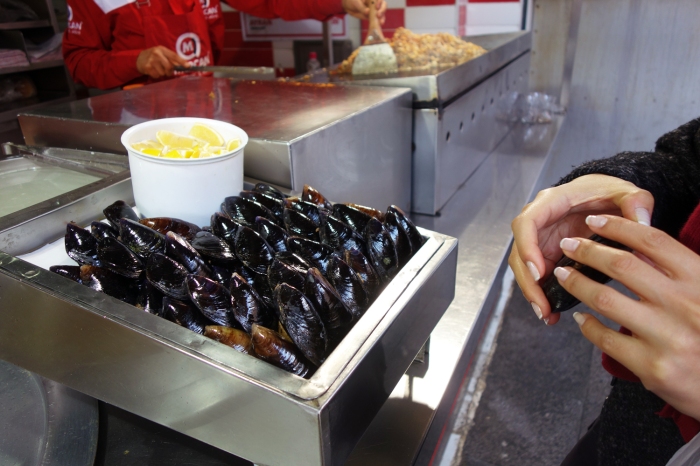 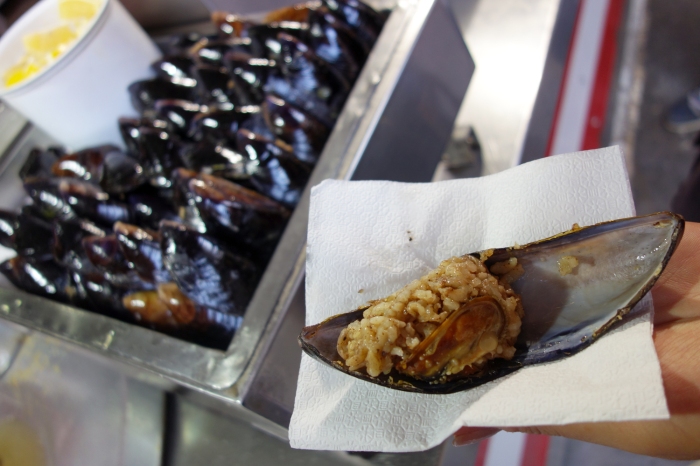 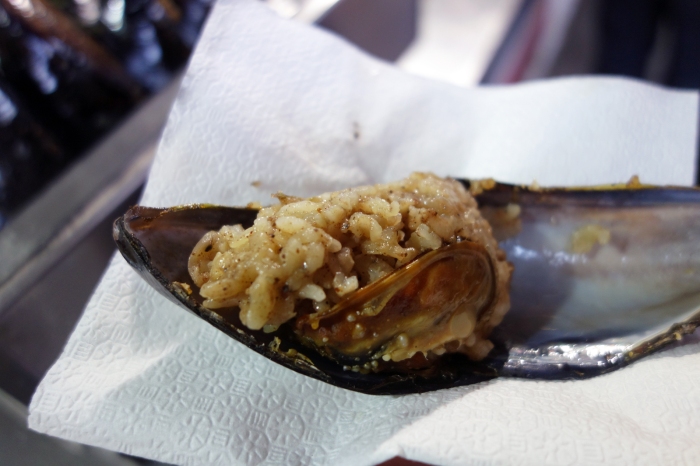 Payment is lax here, so I never really found out exactly how much one midye costs. You walk up to the guy selling them and give him 2 or 3 or maybe 4 or 5 lira and he hands you mussels, which you eat one at a time. He continues handing them to you until you’re full or until the money you paid matches what he thinks they’re worth. I’m pretty sure if he likes your face he gives you double the amount. If you smile he smiles back and talks you through your meal.

They’re mussels. They’re sold for pennies on the street from unlicensed vendors constantly on the lookout for police to bust their spot. If Turkey joins the EU they will doubtless be banned because they’re room temperature shellfish handled without gloves. You have no idea where or how they were caught and neither does the guy selling them. You suspect they contain mercury and the concentrated filth of oil rigs that traverse the Bosphorus. But you simply don’t care. Everyone is doing it and to be cool, you do it too. 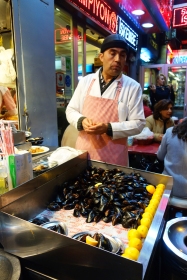 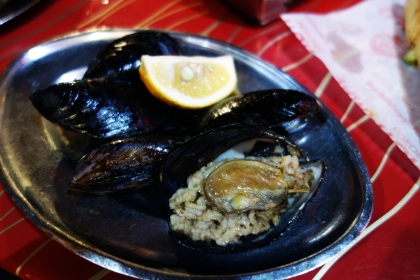 The mussels are stuffed with boiled rice that’s been seasoned with black pepper, oil and hint of cinnamon and cumin. Mixed in are sometimes pine nuts, currants or raisins. Fancier places add saffron. The rice and mussels are cooked separately and the hollowed out shell is filled with a scoop of the former. The fully cooked mollusk is then lain over the top. Lemon is provided and very much encouraged to squeeze on. You eat one at a time and it gets hard to stop.

The rice is wonderfully mild, herby and rich, but not too spicy. The mussels keep their marine brine, complemented perfectly by the slight sweetness of the rice. The texture is one that welcomes you home – mushy, soft rice and plump, juicy mussel sucked off the half shell after a night soaked in beers. 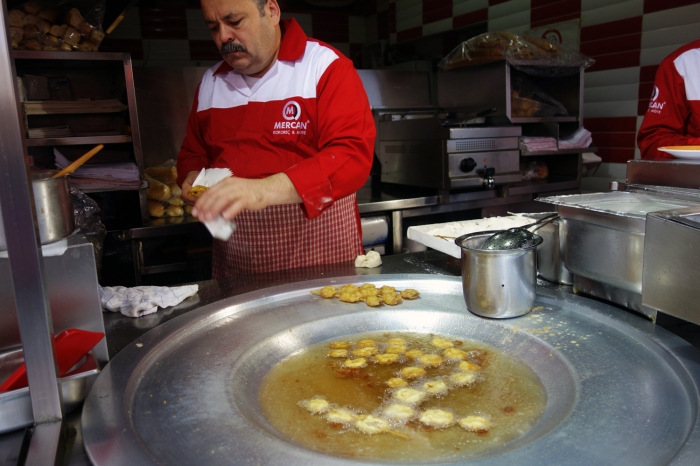 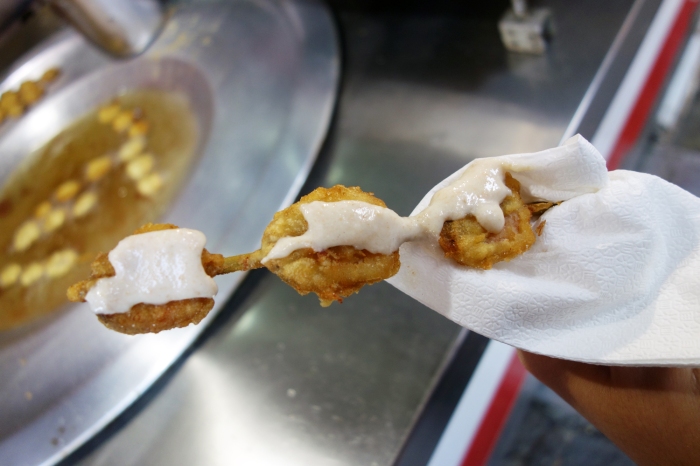 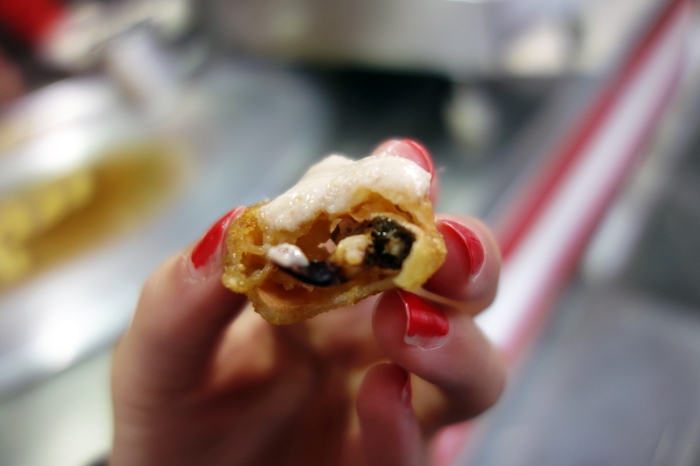 Not far from each midye dolma stand is one that sells its fried equivalent, the midye tava, served skewered onto a shish. The same unlicensed street mussels of unknown provenance, coated in flour (and sometimes egg yolk and beer), then deep fried in a vat of sizzling oil; these are another very popular snack available at any time of day. “It’s all about the sauce with these,” my Turkish friend told me as she added “tarator sos İle” to my order. The man nodded and spooned on a thick smear of tarator, made with dried bread crumbs, walnuts, lemon juice, salt, pepper, herbs and tahini. The most pronounced ingredient, however, is garlic. It’s a dense, nutty paste with wonderful flavor that makes the dish what it is. And for being fried street food, it’s not half bad. The mussels inside stay juicy and moist while the fried exterior crackles under the bite. Maybe the fried coat is a bit too thick for my taste, but I wasn’t expecting anything more refined. There’s excess oil aplenty but the lemon and garlic of the tarator help clean up the flavor. Overall its a satisfying and cheap as hell snack that I see myself indulging in on a regular basis as an Istanbul resident.

Mussels on the street are not something I’d usually go for but when an entire city flocks to them you just kind of do too. They were delicious and they’ve caused no bodily harm so far. So midye, yes, keep them coming.