I dined not long ago at a relatively new restaurant on the Rambla del Raval, a place called Suculent I had heard only good things about. It’s a project shared by owner Carlos Abellán and young stud/head chef Toni Romero in the kitchen of a converted wine house. Next door is a vermuteria that shares the restaurant’s name, a matchbox-sized mini bar to throw back a few fresh glasses of rosso on tap. The restaurant also has a bar and a small adjacent dining area. To get to the narrow elevated terrace of tables that overlook the first floor the waiter leads you through the kitchen. You shuffle through through stoves and stainless steel counter tops to a wrought iron staircase that twists up to a second floor.

The concept of the cuisine revolves around the wordplay of its name, “suculent” from sucar lent, which means “to dip slowly”. The kitchen values bread and sauce, and wants to see customers dipping and dunking feverishly. It’s a telltale sign of comfort and satisfaction when a plate comes back mopped clean of its juices and I bet seeing that brings a proud smile over Chef Romero’s face. Catalan soups, stews and comfort foods are reinvented but only slightly. Dishes are kept pretty much traditional, though with modern or foreign touches here and there. Interestingly, beef seems to reign supreme over the protein selection, with oxtail as the cut perhaps most prominently featured on the menu. Pork, inevitably more central to a cuisine shaped by centuries of Moorish (a.k.a. cows are sacred, don’t eat them) rule, is lain aside to make way for veal tongue, beef bone, oxtail stew. There are also pickled things (mackerel and foie!) and lots of innovative seafood dishes which, on retrospect, I really should’ve tried more of. Octopus is paired with black pudding, stingray is doused in black butter, oysters are grilled on the half-shell in pools of sizzling bacon grease.

After staring blankly at the purely Catalan menu my dining companion and I opted for the meatier choices. I will soon return for the rest.

For his pa amb tomaquet Chef Romero opts for pan de cristal from widely known Barcelona bakery Forn Sant Josep, which has been cranking out a wonderful array of baked goods since the year 1912. The toasted slices are crispy around the edges and fluffy inside, a bit chewy like ciabatta but lighter in texture. The surface is spotted with pores, perfect little traps for the juicy, ripe tomato rubbed on. There’s also some oil and salt, the usual. Another perfect p.a.t., both crunchy and moist but light as a feather.

The signature croquetas are of oxtail and black trumpet mushroom. The thick coat is made with real breadcrumbs, no doubt from bread toasted and ground down by hand. It’s fried to a golden brown and produces a fantastic crunch before revealing a juicy, moist center that floods the mouth and burns the tongue if eaten too quickly. It’s a dense, gooey filling with the caramelized sweetness of braised beef mixing nicely with the earthy wintertime funk of the ‘shrooms. Not the lightest of starters, but warm and comforting on a chilly autumn night. 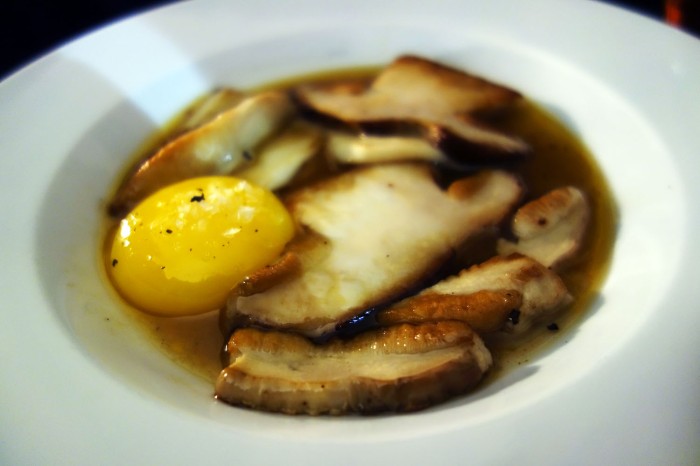 Next came Suculent’s succulent version of the classic Catalan fricandó, a homey stew made with mushrooms and ox meat. In this case braised ox tongue was strained to make a thick, smooth broth that exploded with the flavor of beef but without actual chunks of meat floating around. The focus here texturally was on the mushrooms, which were themselves quite meaty, tender and sliced to the perfect thickness to enjoy each in one bite. A single egg yolk, sprinkled with coarse salt and black pepper added extra decadence to an already very rich dish. All that yolk and beef sauce is dreamy when soaked up with crunchy bread. I’d recommend ordering extra, though I used my leftover p.a.t. and it was a the perfect sponge. 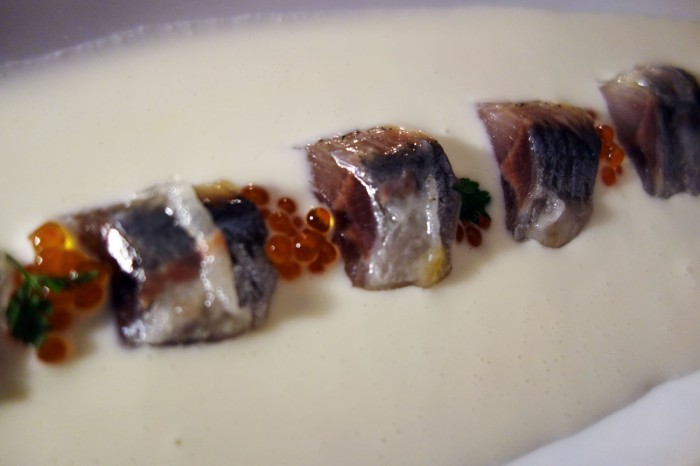 A row of salty, smokey hunks of sardine and intervening piles of bright orange trout roe were bathed in a pool of ajoblanco poured all around, tableside. Ajoblanco is a cold soup made of bread, crushed almonds, olive oil, salt and water. The bread is soaked overnight, garlic and almonds are crushed together in a mortar with a pestle, and the ingredients are combined with water and olive oil before being beaten into a frothy emulsion. Suculent’s version of the traditional cold soup is mild in flavor with a floral sweetness from the raw almonds mashed in. The sauce contrasts sharply with the salt and smoke of the fish and with the burst of brine from the trout caviar. It contrasts too sharply, in fact, for my taste. The two elements of the dish made me very happy separately. I wouldn’t order them again together.

Next came a spoon of bibb lettuce topped with thinly sliced veal tongue, chopped fresh cucumbers, white onions and scallions, all doused in a salty soy sauce and meant to be eaten as a lettuce wrap. It was referred to on the menu as a bo ssäm, which I found to be a bit of a stretch: the latter is a traditional Korean dish made exclusively with pork belly and plenty of funky, pungent kimchi scooped on. The lean veal had a completely different texture than giggly, fatty pig belly and there was also nothing fermented lingering in the background. That is not to say the dish wasn’t delightful; it just really was not a bo ssäm. The veal tongue was crumbly soft and moist, similar to cooked sausage in the fineness of its grains. The cukes and o’s gave plenty of crunch and rounded out the slightly mineral flavor of the tongue with vegetal freshness. The soy sauce dressing fell a bit flat and could’ve used another layer of flavor, perhaps some heat or citrus to wake it up.

It’s not every day that you wake up to the low rumble of a dishwasher as it soaps, soaks and steams the tailbone of a Galician blond. I had snuck the bone off the plate and wrapped it in a white linen napkin before hiding it in my purse, a keepsake of a dish I enjoyed more than a bit. There wasn’t actually much work for the machine to do at all as I had torn and sucked off all the meat, sipping marrow fervently out of every groove and pore. Suculent’s braised oxtail with chocolate sauce and baby carrots is the undisputed protagonist of the restaurant’s diverse menu, a dish that must not go unordered.

The meat falls off, heavenly soft and moist. Bold, round flavors are coerced patiently out of the bone-adjacent flesh by slow-cooking. These are accented but not overshadowed by the rich gravy of chocolate, black pepper and wine that coats the meat and collects in a sticky, dense pool at the bottom of the bowl. The lean meat is interwoven with giggly collagen, silken fat, and crunchy, white cartilage which all add so much palatal intrigue to the texture and take away nothing from the moist fibers of the more sensible flesh. The baby carrots are nice too, shaved and cooked to a toothsome crunch but tender still. The delicate veg compliments the meat nicely and goes with the glossy sauce just as well. An entrée succulent to the fullest, leaving me giddy and satisfied…and with a ox’s coccyx in my purse.

Suculent has the feel of a boisterous restaurant with the promise of becoming a neighborhood institution in just a year or two more. From what I can tell it’s something El Raval needs and deserves. I’ll be back soon for the eel, the octopus, the oysters. The polished tailbone still adorning my bookshelf shall serve as an apt reminder to do so.