A few weeks ago my father came to Barcelona to attend a neuroscience symposium and to visit me in my newest city of residence. I met him in the hotel lobby at midday and he brought me down a colorful array of conference canapés wrapped in cocktail napkins. (Not the first time he’s done that. It’s become a bit of a tradition.) In the afternoon I picked him up and we walked around Eixample. I pointed out my old apartment in a neighborhood I planned to move back to and my favorite cafe around the corner. For dinner we stopped at Colmado on Provença, the restaurant outpost of the century-old Colmado Quílez market that recently moved from its original location on Rambla de Catalunya with Aragó to a more modest venue further up Aragó. The place still carries things like pickled rooster comb (that frilly red thing on the bird’s head) and confit pheasant stuffed with truffles conserved in Armagnac. It’s a gourmande’s Disney World, a truly joyful place.

Behind the bar counter of the restaurant these cans and jars are uncapped and their often oily and flavor-packed contents are served with a side of bread and (even more) good olive oil. Canned marine snacks include smoked sardines, clams, cockles and mussels in sauce, all perfect sopped up with rounds of baguette. There are salty, brined anchovies, pickled things and the combination of the two. There are olives, stuffed peppers, pepperoncini and fresh sardines (boquerones) in vinegar. There’re Iberian hams of high quality and an array of cured Spanish cheeses. There’re also classic hot tapas dishes like their signature patatas bravas, Galician octopus, caracol snails in a Moscatel sauce and sausages of various seasonings. These hot items tend to look pretty gnarly when still cold and stiff behind the counter, but dressed-up and reheated they take on a totally different, quite scrumptious appearance. The food at Colmado is best washed down with a crispy cool glass of dry vermut, of which the bar offers several types, both on the rocks and shaken into a cocktail. There’s also a very well-rounded wine selection with five or six Cavas in case your dinner is a celebration.

Sun-dried tomatoes are always a great item to snack on at a tapas place as you wait for the more serious dishes to be arranged and plated. These are nice, doubtless pulled from the jar in which they’ve been preserved in olive oil for what could be decades. The flavors are concentrated and sultry, similar to roasted tomatoes or an already seasoned marinara sauce. They’re tender and just moist enough from the oil, a great topper for slices of baguette. I’d recommend pairing them with good manchego or goat cheese.

Another great starter are the artichoke hearts sautéed with plenty of freshly cracked black pepper and some olive oil drizzled over. A good dish made great by the simplicity of its preparation. The hearts are tight and plump, with a ton of flavor. The natural sweetness is curbed by the white-hot heat of the pepper. Not too much oil to make them excessively greasy. 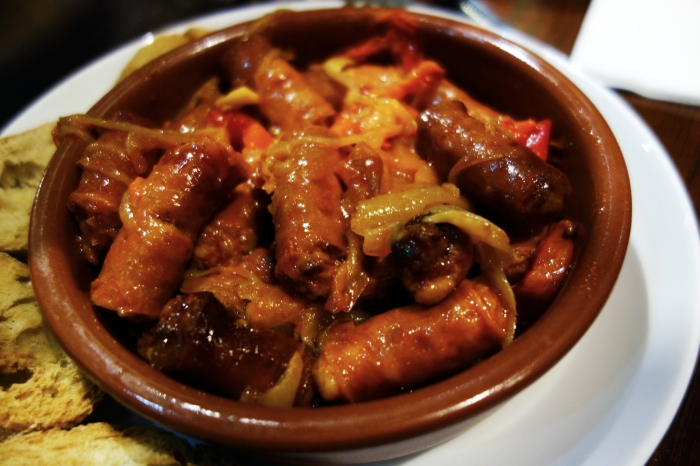 Our first meaty treat was a dish of Xistorretes al Cava, which are pieces of thin Basque chistorra sausage cooked in sparkling wine and served with tender slivers of sautéed bell pepper and onion mixed in. The sausage is bright red and spicy from the paprika with which it is flavored. The tight skin bursts forth juicy pork and red grease when bitten into. The vegetal sweetness of the caramelized peppers and onions balances nicely the heat and tang of the sausage, resulting in a well-composed and richly flavored dish. The only qualm I had with it was that perhaps the links and veg were cooked in a bit too much oil which, when added to the grease already residing in the sausage, was excessive for my palate. Nothing the bread served on the side can’t soak up though…

One of my favorite dishes in Barcelona at the moment is Colmado’s pot of Stroganoff de Butifarra de Payés. Bite-sized chunks of tender country sausage and oyster mushrooms are immersed in a wonderfully rich, beige gravy made with deeply flavorful escudella broth, spring onion and plenty of cream folded in. Smokey paprika powder is sprinkled on for a bit of heat and color. The sausage bursts forth its own sweet and salty porcine zest that goes beautifully with the decadent, though mildly seasoned, béchamel. The mushrooms add a slightly gamy, funky element as they do in any classic Russian stroganoff. The mix of textures here is wonderful. The generously portioned lumps of supple, crumbly butifarra are great paired with the slippery, elastic slivers of mushroom. When bound together by the thick sauce, the two ingredients harmonize in a single, cohesive mouthful that soothes and comforts with its layers of flavor and softness. This dish lulls one into a state of ease. Each bite feels like a cozy yet firm hug from someone who loves and understands you.

When dining at a restaurant with blood sausage on its menu with either of my parents at least one dish with blood sausage will be ordered. I’m certainly not opposed to this tradition. Véreshurka is one of the foods they miss the most from Hungary, one they rediscovered under the name “morcilla” when visiting me in Buenos Aires three years ago. Ever since then I’m pretty sure they’ve come to associate visiting me wherever I happen to live at the time with feasting on the local blutwurst. In Catalonia it’s butifarra negre. On the menu of Colmado​ it’s Morcilla de León, served as a moist black pudding squeezed out of its intestine casing and sprinkled with coarse salt with a side of baked potatoes and toasted baguette to smear it over. This is a wonderful version of a dish for which I care so deeply and what makes it so great is what is left out of the recipe. The blood pudding is precisely that: a thick warm sludge of pig blood with some diced and sautéed onions incorporated, maybe a hint of white pepper too. The coarse salt brings the metallic musk of the cooked blood to the forefront, brightening those flavors but not overpowering them in the least. No bread was necessary for me when it came to this dish. I scooped heaping forksful directly into my mouth and savored the sensation of the warm, mushy stuff melting over my tongue.

Colmado has become a go-to spot for me, one I seek out when I want vermut with a tapa or two, one I show visitors as an example of traditional Catalan and Spanish bar-food. It’s a snug little restaurant and a cozy fit if you find a seat by the bar. Maybe not the right venue for your annual family gathering, but an intimate pre-theater date place, a perfect first stop on a night out in BCN. And, in my case, a great place to catch up with my dad.