When I think of Santo Domingo I think of a colmado bar. I picture a brightly lit corner-shop with a long counter, and behind it shelves stacked with cans, bottles, boxes. Ketchup spelled “catsup,” sweet and sticky Carnation®, economy-sized packs of sanitary pads and toilet paper, cheap vodka, cheap rum. In the middle there’s a Presidente beer cooler and at the end a cornucopia of potatoes, batata and plantain tumbling out of canvas or burlap. The corrugated metal doors are rolled up to let in the warm breeze and logo-ed plastic chairs are strewn about on the sidewalk, some pulled up against a dusty wall painted a tired lime green or suntanned orange. Leaning back in those chairs are chatty Dominicans drinking ice-cold Presidente out of styrofoam cups or rum with Coca Cola or maybe some vodka. They’re (surprisingly) not smoking cigarettes. They are most definitely eating chicharron.

On our first night in the DR my friend and I joined a group of dudes sitting outside a colmado on Calle Santomé near the water and we got to talking about what it means to be Dominican, either in the DR or in the States. We shared our plans for the week and adjusted them according to their reactions to each one. Boca Chica? “Prostitutes and ladrones trying to hustle you all day.” So, no go. Got it. A lechonera? “Eh, nobody really goes to those; better a nice criolla place with different traditional dishes.” Okay. And piña coladas? Those are just for tourists, right? “Hell no! Those are the best… but only when you get them with the good rum. Brugal, Barcelo or Bermudez.” 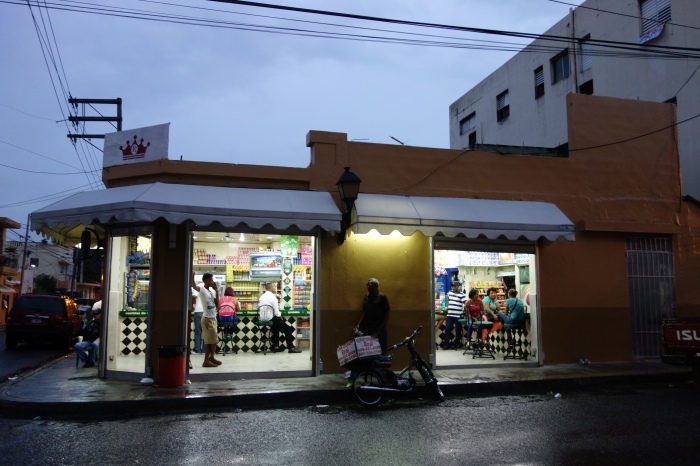 There was still about an inch of beer left at the bottom of our “jumbo” sized Presidente when our new friend ordered us another. “Don’t drink that,” he warned us. “It’s not cold anymore.” Assuredly, by non-Dominican standards, it was still pretty damn cold. But here it needs to be “fría fría.” It’s an absolute must to order it “fría vestida de novia” or draped in a bridal gown of frost. Next he extended a styrofoam container of chicharron and insisted I try some. It was fatty, crunchy and a wonderful side to the beer, though a bit rigid from sitting out all night. When I asked our new buddy if they sold more of it inside he shook his head and answered, “You gotta order it and they deliver.” If I had had a local phone I would’ve done so that first night.

In the days that followed we came across this staple on several occasions. Vendors criss-crossed Juan Dolio beach with a gargantuan load of it wrapped in brown carton paper and slung over the shoulder. Folks sitting outside restaurants and bars had them out in styrofoam boxes. Entire duffle bags of the stuff were brought onto buses and sold per piece, along with fried skin. But somehow it never felt like the right moment to indulge until we walked by a place called Los Reyes del Chicharron on our last day in town. 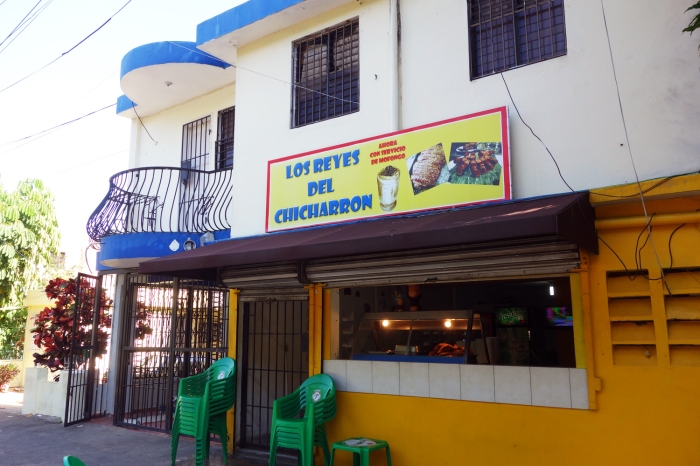 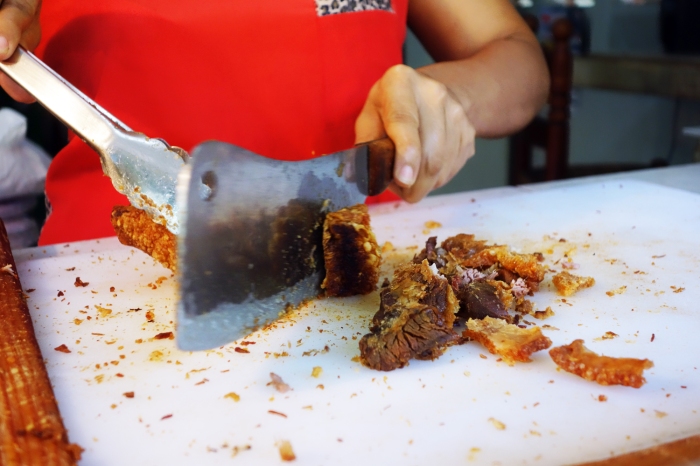 A large mound of freshly fried pork cracklings gleamed golden under a heat lamp out front. As I approached, the woman behind the counter glanced away from her tiny television set and got up, dejectedly, from her chair. As she sauntered over to the counter she asked which one I wanted and I pointed to a nice fat one in the middle of the pile. She pulled it from between two other pieces, slapped it onto a clean, white cutting board and hacked away with a butcher knife until what remained was a mound of bite-sized chunks. She scraped these into a box. When I asked for lime she instead squeezed on agrio de naranja, a spicy and sour bitter orange condiment unique to the DR and often used in pork dishes to balance out the excess grease and fat. 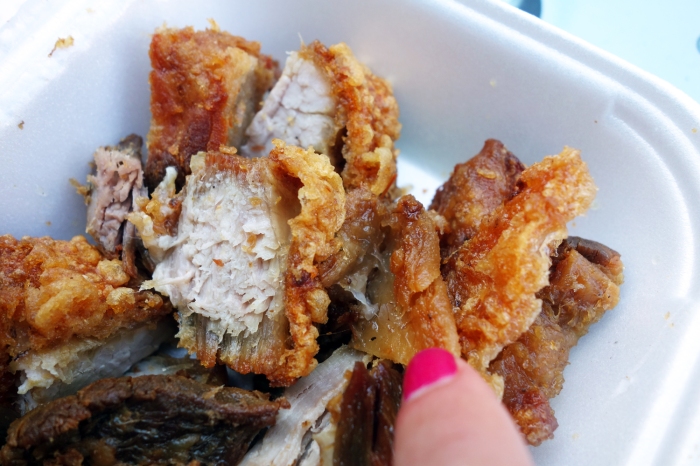 I must admit that from the exterior an uncut hunk of chicharron doesn’t seem too appetizing. It resembles a greasy brown log of just pork skin, of which one bite is sufficient but more than three bites is repulsive. Its not until the chopped bits are flipped over that the interior is revealed and from that point on it’s a whole other thing. You pick through the heap and choose; each piece has its own personality. There are thin slices of just skin that yield a tantalizing crunch not just on the first bite but all the while you chew. These are called cuadritos and are often sold separately in a bag to snack on at the beach or on the bus. There are slices with even thinner bits of skin attached to meat by a fluffy white cloud of silken, milky fat that melts like butter against the heat of your tongue.

There are pieces with skin wrapped tightly around a circle of fat that jiggles like a marshmallow when probed with a finger. These are by far the tastiest, but nothing short of sinful. At one point I took a quick glance around to make sure it was okay to eat something so fatty or whether such pieces were best left aside. But no. It’s fat but it’s good fat, tasty fat that keeps you light on your toes instead of weighing you down for the rest of the day. It’s crunchy, melty, hopelessly savory fat that leaves you with a smile and beaming with energy. Those around me nodded in recognition of my excitement. My friend not quite the die-hard fan of skin, cartilage and fat that I am scavenged the box for the fleshier bits and encountered succulent white and dark meat along the way. These are fat-adjacent and thus moist as hell, with a thin coat of that same seductively crispy skin draped loosely around. There are pieces with layers of meat, fat and skin that glow like golden trophies of porcine versatility. One type of piece follows another until the box is empty. An near-frozen Presidente, the dry sizzle of a cigarette and a leisurely lean back in your chair closes a chapter before the chatter takes over. 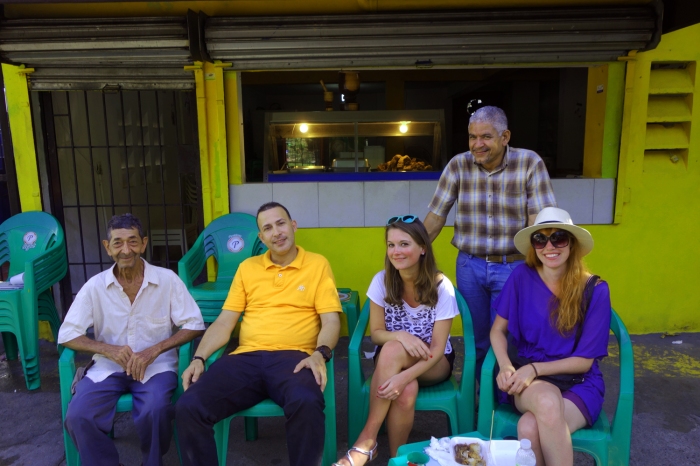 In the Dominican Republic chicharrones are a social food, one you share all around with friends, old or new. It was while crunching on that cracklin’ and sipping frosty pilsner that we learned most about the customs, the humor, the pride and the worry, the Dominican perspective. It was then also that we formed the strongest connections with folks who genuinely wanted us to understand better and enjoy ourselves in their country.