And then there was a bakery called Boulangerie de Mamie Jane on Route Neuve in the center of Gordes.

When sightseeing in small French towns it generally seems good practice to skip dessert at whatever restaurant one has lunch in and stop by a boulangerie afterwards instead. Chances are the restaurant’s desserts are brought over from a nearby bakery anyway; you will likely get a fresher version and doubtless a wider selection if you go to the latter directly. Perhaps you sacrifice the pastry-side coffee service with this move but, at least for me, it’s worth it.

So we made an effort to skip the monstrous tranche of apricot clafoutis at Le Gordes Manger, and hopped across the street to Mamie Jane for something sweet with which to finish. There were lots to choose from. Set on a shelf against the back wall were baskets full of buttery navette cookies flavored with figs, almonds and bright purple lavender; bite-sized shortbreads with dried fruits and nuts, oblong croquettes dusted with granulated sugar to grab a handful of for tea time later on.

In the pastry case there’s cakes with cream and chocolate ganache. Above these live the cookies, croissants and crunchy things. I push for a mille-feuille and an éclair au café from the case. The boo tacks on an écureuil, which we eat back at the house later on. 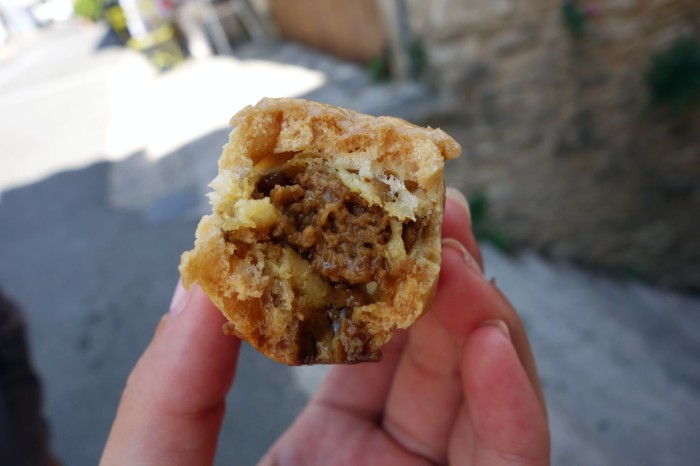 This was a classic éclair made with the same choux pastry used for profiteroles, not the long, cream-filled donut for which the pastry is often mistaken in the States. So, the case has a crunch on the exterior and soft, pillowy insides. It’s topped with sugary, coffee-flavored icing and filled with coffee-flavored custard in which we note a hint of coffee liqueur as well. It’s good, though the filling is a bit odd in flavor and the dough not as fresh as we had hoped for (since it is the afternoon already). But the mille-feuille that comes next more than makes up for these small faults.

After all the bullshit “Napoleons” I’ve had to sample for work in the U.S. it was a pleasure to get the chance to enjoy a real mille-feuille. (Actually, calling this a “Napoleon” isn’t even accurate, as the latter is made with a layer of almond paste while mille-feuilles are not). Three layers of flaky, buttery, puff pastry (in this case caramelized in the oven to a seductive golden brown); globs of creamy vanilla custard gushing out on all sides; a thin cap of icing combed with chocolate syrup to form an elegant black-and-white web over the top. This version is a bit messy. The slices are not completely consistent in size or shape. This means home-made. A mille-feuille is very basic in flavor, a combination of nutty, toasted dough, floral vanilla cream and sticky sweet fondant. What makes each bite exciting is the series of textures: the flaky and crunchy, the creamy and thick, the smooth and glossy, all combined in a single mouthful. 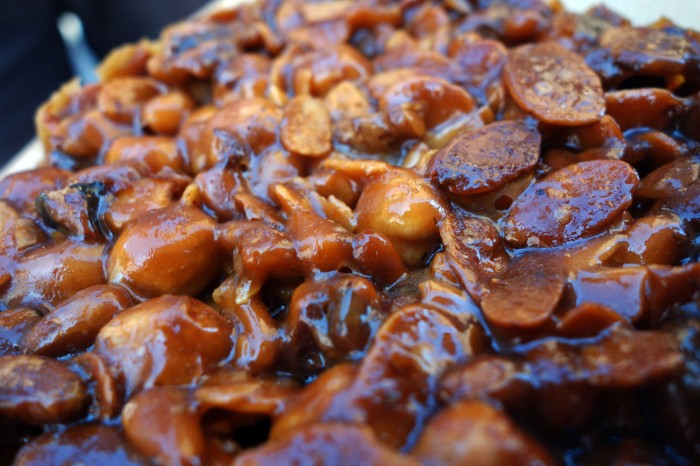 A peanut and almond brittle that I am told is called an écureuil (French for “squirrel”) is shaped into a fat little cylinder before the caramel hardens. It survives the overwhelming August heat without melting. When smashed, it shatters like glass into uneven shards that are crunchy, nutty and sweet. A very basic snack, and relatively light compared to pastries in the case.

It’s my experience with small, sleepy towns like Gordes that the pastry dough always feels crisper and fresher, icing velvetier, custard more decadent and rich than in the sweet-shops of big cities. These messy little hand-crafted pastries seem to be made with a different kind of patience and care than the perfectly neat and glossy paris-brests and religieuses I saw lined up like soldiers in the bakeries of Paris just last week. Some of them have faults, probably fewer when purchased fresh in the morning. But that mille-feuille made the perfect ending to a day spent in the Provençal town.