For the first time in a long while I returned to Hungary with a guest, this time with one I love. And while it was important to point out the Basilica, Margit Island and the magnificent view of the Danube and Pest from the Buda Castle, it was just as crucial to me that he taste a seared lobe of Hungarian goose liver, that he sip a bowlful of chilled sour cherry soup at my grandmother’s house, that he experience the joy of a freshly fried lángos (our beloved fried dough topped with garlic sauce, cheese and sour cream) with a beer after a day tanning by Balaton Lake. All of those things ended up happening and I was happy to get the chance to show off the wide range of Hungarian cuisine, from €0.50 velős pirítós (brain marrow on toast) in Balatonfüred to the €9.00 slice of cake at Café Gerbeaud, and everything in between.

I thought it might be interesting to take him for lunch one day to Frici Papa Canteen on Király street in the Center. The place specializes in very basic, homey classics; they serve the kind of dishes Hungarian mothers would cook for their children on, say, a Wednesday for lunch. Dishes are cafeteria style but served in a restaurant setting, wait staff and all. Prices are almost shockingly low. Some of the most popular choices on the menu are those that stir up nostalgia for a childhood lived before the cultural takeover of Burger Kind and KFC, dishes that bring the diner back to a time when Sunday lunch at grandma’s place represented the glue that held the family together. 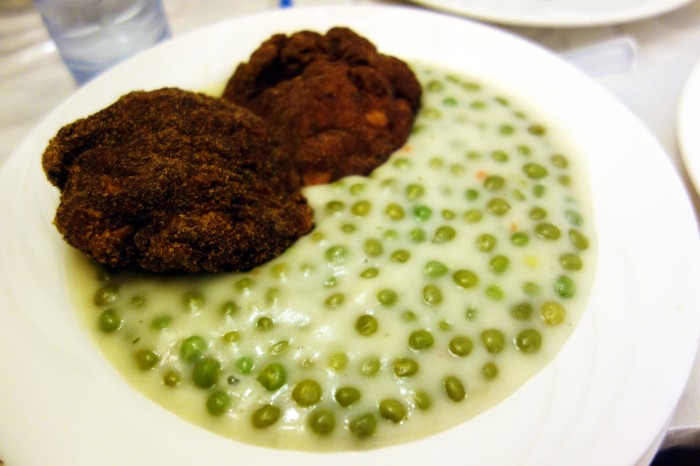 One type of dish that Hungarian children are perhaps not so nostalgic about is the főzelék.

What is főzelék? A thick soup or thin stew, a hearty thing made by adding a lard-and-flour roux and/or sour cream to veggies that have been cooked in salted water. It can be made out of pretty much any vegetable, but the most popular variations are with green beans, yellow beans, peas, cabbage, potato, spinach, sorrel and lentils. The főzelék itself never involves meat in the recipe but is ultimately paired with some sort of grilled or deep-fried protein. Every family seems to have a favorite pairing. Főzelék is a cheap, filling dish with simple flavors, which became the standard lunch at school and institutional cafeterias during Hungary’s Socialist Era. It’s still the favorite of lunch ladies who ladle the stuff into bowls for hungry children across the country. After 5-6 years of the same thing they, understandably, grow quite weary of the stuff. But it’s also a comfort food for many, especially when made by someone who loves ya.

My personal favorites are my grandmother’s sorrel főzelék with a fried meatballs and the aromatic squash and dill főzelék with fried frankfurter. Frici Papa had neither of these on the day we went, so we got the next best thing: a creamy stew of peas (borsófőzelék) served with two enormous lumps of breaded and fried pork mince. The roux had the right consistency, thick but not gelatinous or starchy. It held together the tender peas nicely. The flavors of the főzelék itself were very basic: creamy and clean milk, fresh parsley and the naturally sweet little seeds suspended in the stew. Most of the zest came from the juicy meatballs, which were seasoned with plenty of garlic, black pepper, paprika and salt. I really enjoyed the sandy breadcrumb crust coating the exterior of these balls. The crust provided a fantastic crunch to complement the steamy, moist and crumbly ground pork within. 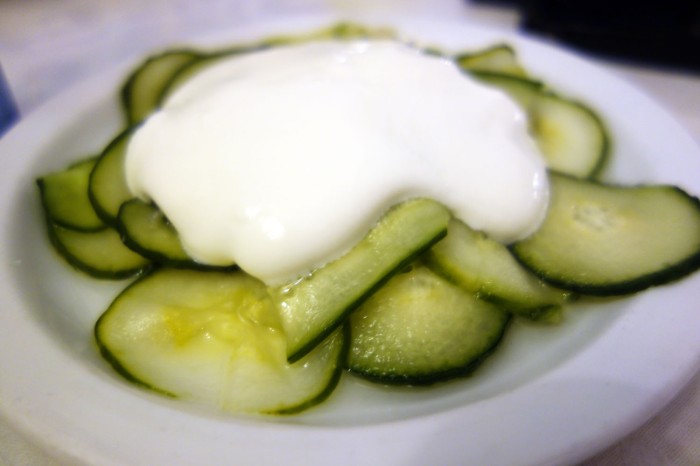 We also tried Frici Papa’s version of the classic csirkepaprikás, a stew of chicken in paprika sauce served with chewy noodle dumplings called nokedli. The chunks of chicken were smooth and tender, though the sauce was a bit too creamy for me and a tad too much sour cream diluted the flavor of the paprika. The nokedli were also slightly starchy, sticking together in clumps that were difficult to pull apart. A wonderful side dish is uborkasaláta, a salad of thinly sliced cucumber pickled lightly in vinegar and sugar and topped with a dollop of Hungarian sour cream. This is a favorite in Hungary, one that hits the spot especially on hot summer afternoons. It’s crunchy, refreshing, with a good balance of sweetness and acidity. It’s also a great pickle to help cut and digest the creamy paprikás sauce. This hearty plate of comfort food (salad included) cost only €4.50, but was substantial enough to last us through the first half of the day.

I often recommend Frici Papa to travelers visiting Budapest for the first time and seeking an authentic Hungarian meal on the cheap. For those without the luxury of a Hungarian grandmother to cook for them, Frici Papa is a good alternative.