I asked several Dominicans for advice on where to try good traditional Dominican food in Santo Domingo and they almost unanimous responded “Adrian Tropical” without a moment of hesitation. This place is a fiercely beloved institution of which locals are extremely proud. Brightly illuminated on the Avenida George Washington along the tourist-friendly Malecón boardwalk, the restaurant is relatively easy to find. And, once seated, it’s also pretty easy to spend hours lounging around, sipping a piña colada and listening to the sound of waves crash against the pier. The dining room stretches from two levels above the water to a covered area in the center, and is large enough so that the place is never full. There’s rarely a wait. The kitchen specializes in grandma-style classics, while the bar cranks out some of the best cocktails in town. 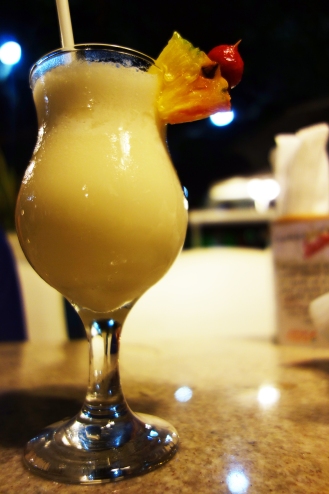 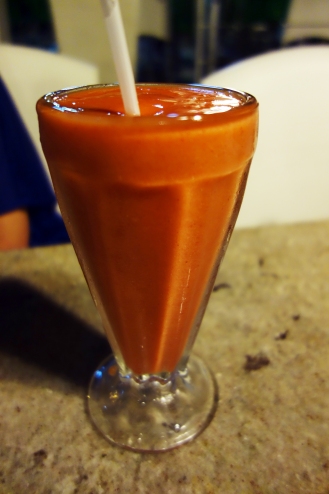 I ordered a piña colada, which turned out to be one of the frothiest and best proportioned versions I had during my time in the DR (which is saying a lot, considering I had about 4 of them per day). I also tried one of their heartbreakingly delicious smoothies, “heartbreaking” in that it served as a reminder of the flavorless produce I’d be returning to in just a few days’ time. It was a thick blend of what our waiter specified were eight different types of fruit, most prominent of which were papaya and mango. Boasting perfect balance of sweet and acidic, each velvet-smooth gulp of the ambrosial nectar made my eyes close and my chatter go mute for a moment. I was never disappointed by anything that had to do with fresh fruit in the Dominican Republic, but this was perhaps the most impressive of the juices, one I was very happy to have tasted.

The welcome shot is of what Adrian Tropical is best known for; each guest receives a small wooden bowl of their signature sancocho (renamed “sabrococho” on their menu). Sancocho is a traditional stew derived from a Spanish, chickpea-based “mother stew” named cocido, which later diversified in Latin American countries into several variations. I’ve tried it at the home of my friend’s aunt in Medellin and I’ve heard my Venezuelan friend wax poetic for hours about his mother’s version in Caracas. In the D.R. it is just as sacred, perhaps the most cherished dish of their cuisine, almost always indicative of a family gathering or a party with friends.

As sancocho had singlehandedly been what brought me to Adrian I ordered a larger portion and finished nearly the whole bowl before remembering that I had originally intended to share it with my friend. Suspended in the soup were tender chunks of chicken, pork and beef that melted on the tongue after what had clearly been hours of cooking. There were slices of plantain, along with cubes of yam, cassava and some sort squash. These added occasional hints of sweetness and a hearty vegetal essence to the dish. The starch from the root veggies and the collagen from the meat had thickened the cooking liquid, converting the latter into a golden brown blanket of a broth, a silky, thick pool of endless flavor. Adrian Tropical’s sancocho is immensely comforting and rich with the care spent in preparing it.

We also tried the restaurant’s famously popular mofongo served in a wooden bowl that hinted at how it was prepared. Mofongo is originally a Puerto Rican dish that was picked up by the Dominicans in the 1960’s when many of them fled to PR and New York from the dictatorship of Rafael Trujillo. Eventually the dish was adapted into Dominican cuisine as a comfort food staple. Mofongo consists of fried plantains smashed together with garlic and chicharron (crispy fried pork cracklins) by means of mortar ‘n’ pestle. It’s a rather thick and dry mash that is best when hydrated with a bit of sancocho eaten on the side or poured over the top. Mofongo is similar to a typical Dominican breakfast item named mangú in that it consists of plantains that are smashed up with seasonings. But while the plantains are boiled to make mangú, mofongo uses plantains deep-fried in oil. And while mangú is very mild in flavor (too mild, in fact, for my personal taste), mofongo is loaded with garlic and crunchy, salty pork to keep each bite interesting. For me the mash was still a tad too dry, but spooning on sancocho easily remedies that problem. The rich broth of the soup also adds extra flavor to the warm plantain. Served on the side were thin strips of fried beef seasoned nicely with a sweet and savory marinade, but a bit too tough to chew. Fortunately the mofongo and sancocho were beyond substantial enough not to need too much meat.

My travel buddy, Dominican friend and I ended up staying at Adrian Tropical for over five hours. Perhaps that had more to do with the particularly engaging conversation that flowed so freely between us. But it was the comfortable atmosphere and wonderful local fare that made the latter possible. I contend that no trip to the D.R. is complete without seeing Santo Domingo; it’s not all about the luxury resorts in Punta Cana. And no visit to Santo Domingo is complete without dining at least once at Adrian’s Tropical, the people’s favorite restaurant by the sea.