Masa is not your ordinary South End jewelry-box; it is truly a force to be reckoned with. The ambience is light, airy, comfortable yet elegant, perfect for both after-work drinks and snacks (in the bar/lounge) with friends and special occasion celebrations (in the dining room). The menu features creative pairings, dishes infused with simple Southwestern flavors (chipotles, lime, cilantro, smoke-roast) but shaken and mixed up in wonderfully unique and unexpected ways. 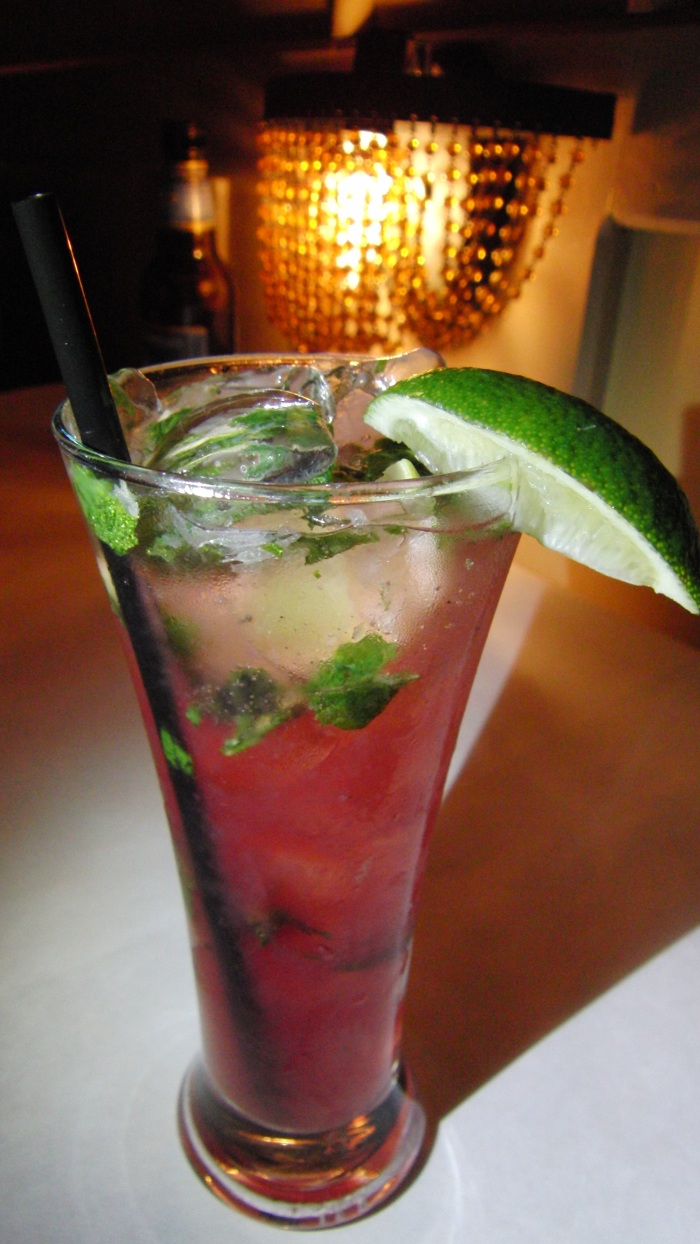 The blend of raspberry, mint and lime made a pretty delicious cocktail, although it was a bit watery and very light on the rum. 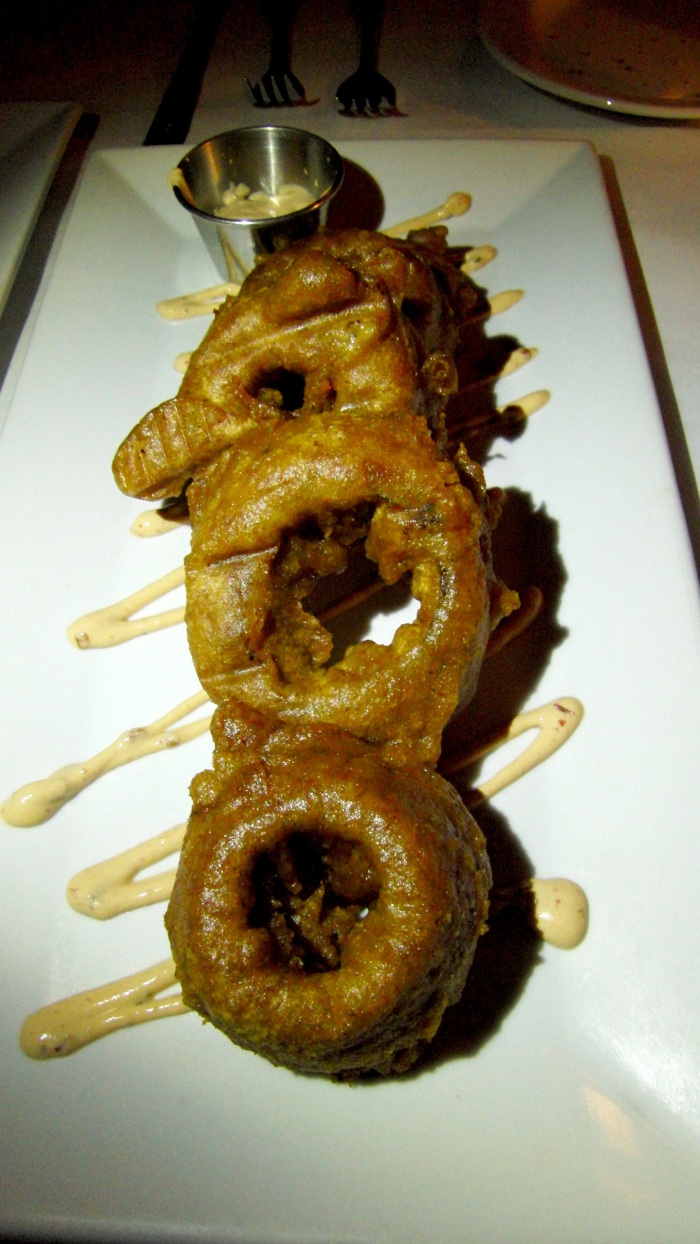 Kind of difficult to believe these rings were voted Best of Boston since they weren’t anything special. The batter was way too thick and greasy, soggy not crunchy. The onion strips themselves were overcooked and mushy, adding no firm crispness to these rings. The ancho chili aioli was okay but it was more reminiscent of a regular chipotle mayo and did not stand out too much either. 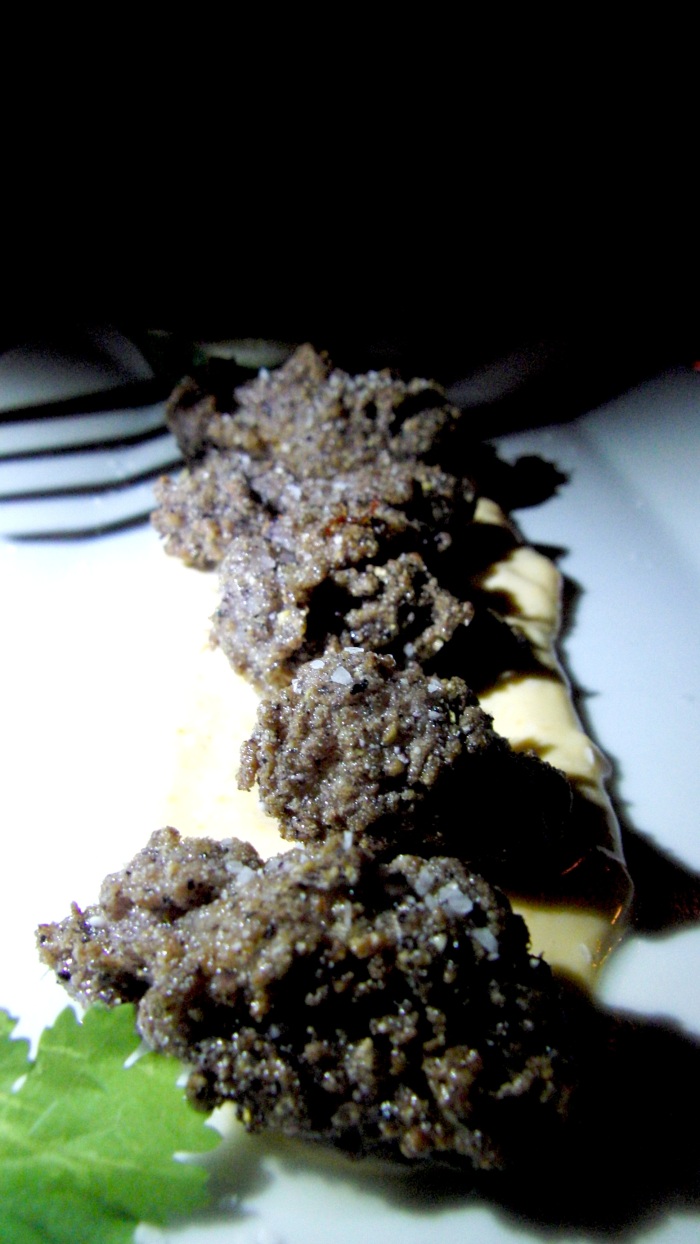 These oysters were definitely my favorite meal of the night. Upon biting into these amorphous little treats, I first felt the crunch from the cornmeal coating mixed with the creamy tang of the pepper tartar and lime juice. The second sensation I felt was one of slightly briny, sea-water flavored oyster juice bursting into and flooding my mouth, mixing with the tartar to create a wonderfully complex rainbow of flavors. I ate these with my eyes closed, ignoring all other 4 senses in order to savor what was going on on my palate.

Finally, fatty, meaty little pork rinds on a bed of earthy black beans, topped off with pickled red onions and slightly sour shreds of feta-like cheese, lime to lift the whole thing up a bit, all sitting on a crispy corn chip. Though I thought the chips were a bit overloaded with the huge portion of toppings and thought a piece of toasty crostini would’ve gotten the job done better, this appetizer was a great treat. 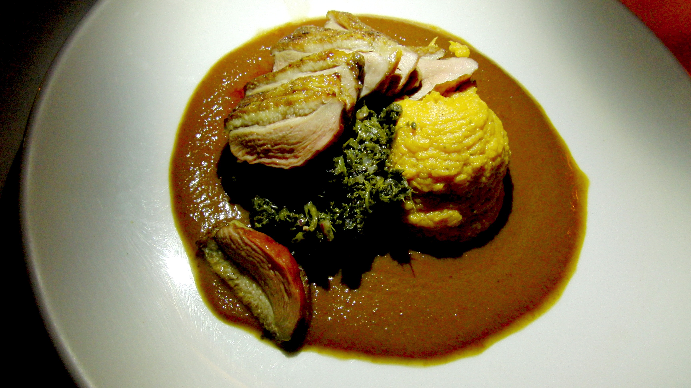 The duck meat was moist and juicy, deeply infused with the cherry juice it was basted with, though the skin could have been a bit more crisp (since the skin should always be the protagonist of any duck dish). The green chili sweet potato mash was an interesting side dish, though the sweetness overpowered any hint of green chili. 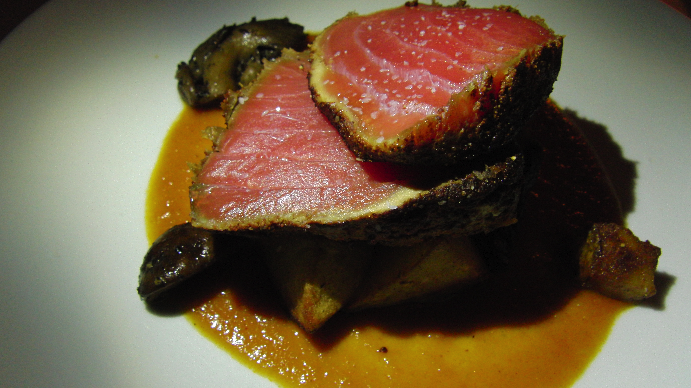 Cinnamon sweet, blackened crust surrounding a perfectly bright, fresh ahi steak. The sweetness of the yellow mole echoed the cinnamon in the crust and the porcini mushrooms and roasted potato chunks provided a great textural contrast (chewiness of the mushroom and hearty crunch of the potatoes) to the tenderness of the fish. A great dish. 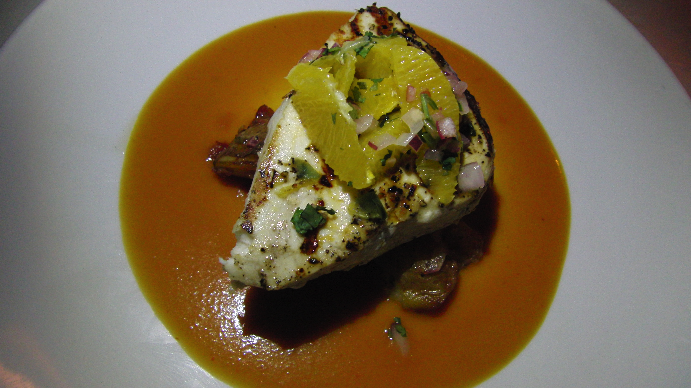 Flaky to the point of falling apart so easily in your mouth…The citrus salsa, with its pretty little wedges of blood orange and bits of green chilis, julienned red onions and fresh herbs added tremendous brightness to the dish and seemed to invade the tender, white flesh of the fish. The roasted potatoes mixed with crispy bacon pieces were a surprisingly great side, with the potatoes providing a firm stability to the dish and the bacon echoing an absent piggy soul, the smokey fat mixing brilliantly with the fat-less freshness of the fish.

Where do I start describing this dish? Lamb has a deep, earthy almost mineral-y flavor which is very versatile. This one was cooked perfectly without an ounce of fat and was pulled in several different flavor directions by the other ingredients of the dish. The sour cranberry salsa on top brought out its sweetness while the celery root puree it was swimming in accentuated earthy tones. The mashed potatoes served as a great mushy companion to soak up all the meat-juice.