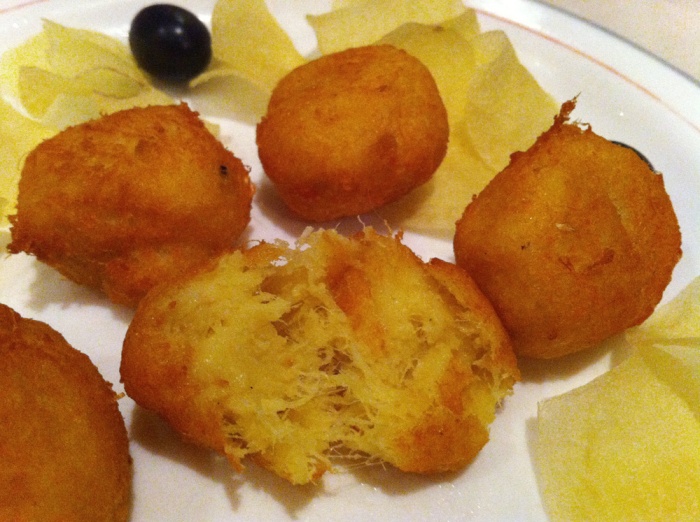 Sometimes I go to a place unprepared but openminded and I end up stumbling on something delicious. And sometimes that doesn’t happen. My recent trip to Macau was an example of a food find failure, one that ended in my leaving the city unimpressed but, nevertheless, eager to try again. I had heard of the melting pot, flavour-blending nature of Macanese cuisine and I had known it was mainly a fusion of Portuguese, Southeast Asian, Indian and Chinese cuisines. I saw the Tony Bourdain episodes. I knew there would be pasteis de nata and pasteis de bacalhau, along with crispy pork, curry crab and chili prawns. I suspected I might be in for a whirlwind of flavors, spices from all over, delicious wine-y sauces from Portugal and crazy textures from the Eastern cuisines. I was especially looking forward to trying that famous Macanese snack, the pork chop bun.

Where I went wrong is in thinking that these things would jump out at me in Macau, as crispy duck and goose, fatty pork, chicken feet, Hong Kong waffles and century eggs jump out at me as I walk down any street in Hong Kong. I went right into the casino-poisoned heart of downtown and then straight to the chiseled and primped, over-touristed Portuguese plaza on the other end and assumed that this was it. And although I saw a few polished Western bakeries showing off gleaming overpriced pasteis de nata in their windows, the stuff I wanted was not thrown in my face as it is Hong Kong and, being unaccustomed to the subtleties of a slightly more Westernized place like this, I did not find what I was looking for. A shame because I know it’s all there somewhere. And before I leave the East, I will find it.

I stumbled into a completely deserted and far too large restaurant, a (trying-too-hard-to-look) Portuguese place called Fat Siu Lau, on Rua da Felicidade & Travessa Do Mastro. To be fair, the place is clearly more of a dinner venue and I was there at 2:30 pm, a time at which restaurant staff automatically label you as tourist and try way too hard to make you believe something about the place that just isn’t true. Over-polished gitchy mahogany furniture which hinted more at a sense of false luxury than the Portuguese rustic charm I think it was attempting to emulate. Not one of the ridiculously dressed (in overcliche’d Portuguese attire) Chinese waiters seemed like they had anything to do with the place they were working in and peeking back into the kitchen on my way to the bathroom not even one line-chef was Portuguese. On a 38 Celsius day I had to ask for water and then send it back when it was as lukewarm as the perspiration soaking through my clothes. After about 30 minutes of just sitting there, sweating and starving, one of the waiters (audibly gossipping with the another) came over and took my order. The stuff came pretty rapidly and was okay but I guess pretty easily not to screw up. There was nothing especially interesting on the menu that wasn’t extremely expensive (for what it was) and the house signature was a roasted pigeon which is clearly a Chinese specialty, not a Portuguese one. I ended up ordering a salad to lift me up on an excruciatingly hard day and some pasteis de bacalhau, which I had been craving the whole ferry ride over.

Not bad but not good, and at that moment, for the price and location and reputation of this place, I was expecting great. Although the cod cakes were fried perfectly and were not at all excessively greasy, the proportion of potato to fish was a bit off, the ratio leaning far too heavily on the former, resulting in what was more like a potato croquette than a bacalhau cake. Sure it looked good and the fishy threads made me think it was going to have much more fish flavor when I bit into it, but overall it was a bit flat and boring. This dish is also traditionally made with parsley or some similar herb mixed into the patty to give it an extra subtle flavor and a bit of color (green specs running through it), which in this case was completely lacking, even as an after-thought (no herbs – chives, parsley, or basil) sprinkled over the top. The dish could still have been saved by a nice garlic or lemon aioli, a tart yet creamy sauce to soothe the hot oil from the fried coating and pet the fishy flesh inside, but this was also absent. The only other thing on the plate were thin, oily, almost completely flavorless rice chips, which were too similar in texture and color to the pasteis to be a suitable garnish, let alone a side.

3 thoughts on “Bacalhau in Macau”