A few days ago I had the pleasure of making a shotgun trip to Macau in order to sort out some of the bureaucracy behind my Hong Kong visa. As I had meetings that day which I couldn’t cancel, this was not the exciting day-trip I was planning for a few weeks from now. It was a sweaty dash to the ferry terminal at 6pm, a crossing of fingers that all goes well at passport control, a lonely, unplanned and phone service-less 4 hours in a city I just can’t seem to understand. After my utter failure at finding authentic (or just plain GOOD) Portuguese food in a city that is known for apparently having maintained its Portuguese cuisine and mixed it successfully with local Chinese and Southeast Asian food tradition, I watched the Tony episode on Macau and was shocked that he actually seemed to really enjoy the place. Granted, he had a fixer and a local family with a local mama placing dishes of homemade good stuff in front of him and explaining the stories behind the food culture. But he found real Portuguese food, he enjoyed the local egg tart (which to me is not sweet enough) and one of the nums that stood out most was the Pork Chop Bun. He loved it [see below] and I had no real clue of what else to get in this city that isn’t overpriced casino food or overpriced fake Portuguese pigeon, so I decided to go for one. 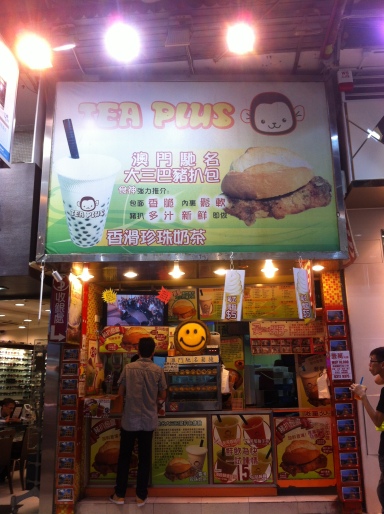 Unfortunately, because of the timing of my trip I was unable to make it to the popular Cafe Tai Lei Loi Kei in Taipa before the place sold out of its famed product. They start selling these bad boys at around 2pm, only making a fix number of them per day and these tend to sell out by around 6pm. I got there at 6:30pm. No luck. So I went on a quest to find it somewhere else, somewhere less famous, and as I was walking around St. Paul’s Ruins, about to give up and go pork chop-less back to Hong Kong, I spotted this place. Looked like a chain, over-marketed and distasteful. A giant image of a Pork Chop Bun next to one of Bubble Milk Tea. A video clip set to loop about the place being featured in some Korean show a while ago. Not exactly what I wanted but, as I was getting antsy, I decided: The Pork Chop Bun is a fast food. It’s street food. It’s a soak-up-the-booze late night food. So there is no reason why a place like this wouldn’t have a good one. So, I decided to settle. 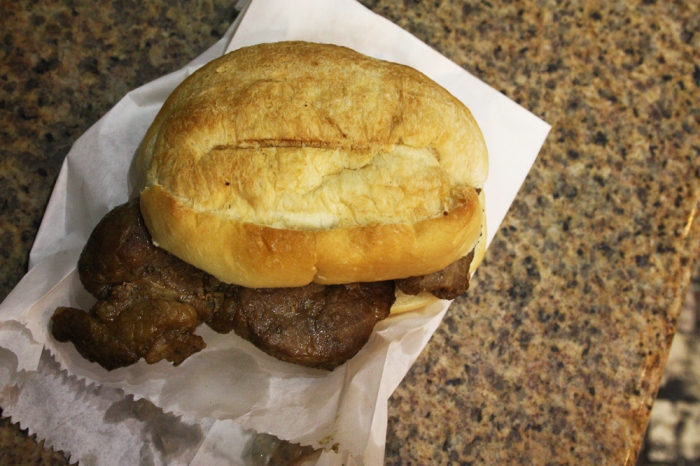 And I was kind of right. The bread was actually not terrible at all. Crispy out- and soft inside, not stale and dry as I was expecting. The pork chop was fried fresh, nice and warm. However, it was a bit fatty around the edges and greasy from the oil it was fried in. The bread soaked up some of it, but it still left me feeling a bit naughty. From the look of the meat, I was expecting a chewy disaster but it was actually quite tender despite it being about .75 inches thick. Except for a bit of salt and black peppercorn, the thing was not seasoned at all, so the pork was allowed to oink loudly through. A simple snack with only two ingredients, but kind of the perfect thing to have with a beer after a long walk around the city. And at only 20 pataca (= 20 HKD = 2.50 USD), it is also a great bargain.

I got back to Hong Kong with a full belly and a re-stamped passport. Although I wish I had had the time to walk around a bit more and sample a few of these buns in different places, including the more well-known ones, overall it was a successful day.

This lucky bastard got the good stuff…