A while back, my father attended a neuroscience conference in Portugal and I joined him for some sight-seeing and a dinner in Lisbon. The morning after a fun night of catching up over bacalhau a minhota I dropped him off at the conference center and headed to Bélem to see the Padrão dos Descobrimentos, Jerónimos Monastery and, of course, the Torre de São Vicente. Having snapped a selfie or two in front of each, I jumped in the long but fast-moving line to one of Portugal’s biggest culinary attractions, the Pastéis de Belém bakery and café. For those who adore pastéis de nata as much as I do, this place is a must-do Mecca, the very first bakery to commercialize this magical little pastry and the only one to own its carefully guarded, original recipe.

A lil’ history: Pastéis de nata were invented by monks of the Jerónimos Monastery, who played around with different recipes using the egg yolks that were left over from the whites used to starch the nuns’ habits. In the 1820’s, when all of Portugal’s convents and monasteries were being shut down, the monks of Jerónimos started baking these pastries in the buildings attached to a local sugar cane refinery and selling them to raise funds to save their monastery. As popular as their pastéis became, especially among travellers visiting the Tower of Bélem, they did not suceed in funding the monastery’s operations and eventually sold their secret recipe to the owner of the refinery, Domingos Rafael Alves. In 1837, Alves opened Pastéis de Belém, which to this day is still run by his descendents. The original recipe remains a family secret and is known to only a handful of master bakers. In fact, the baking of the pastéis takes place in the bakery’s Oficina do Segredo (or “Secret Office”), where a majority of the staff are not allowed. I’m pretty sure the secret involves adding lard to the dough to make the pastry shell extra crunchy… but who knows? Only they do.

The line didn’t take too long and was definitely well worth the wait, especially as the people working at the café were exceptionally inviting and kind. Perhaps they felt sorry for me, since I had only my iPhone as company. Or perhaps they could smell my earnestness from miles away. The café interior is actually quite large and labyrinthine, with several mosaic-tiled rooms in which to sit and enjoy a pastry (or two) with an espresso. I was seated in a room that overlooked the line of people waiting and turned my chair away from them to protect my pastéis from prowling eyes. 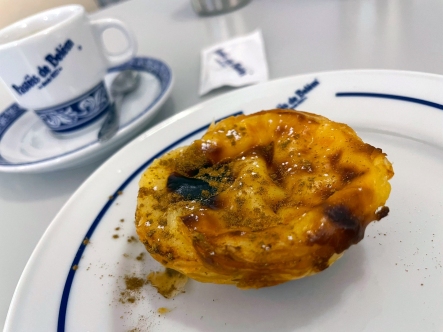 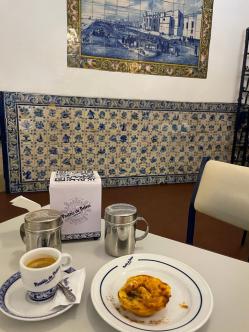 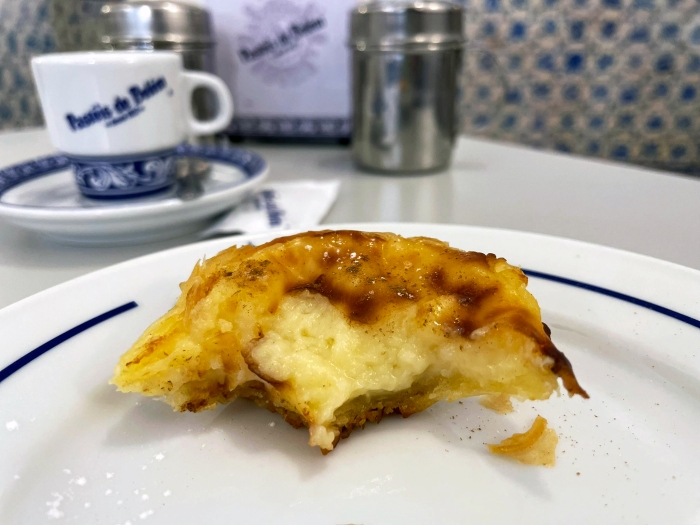 To say that I have never truly experienced the full potential of this pastry, which I had nevertheless enjoyed on several occasions prior, is a gross understatement, which I had doubted during my journey to Bélem but was fully convinced about afterwards. Never had I ever tasted a pastéis like this one, not elsewhere in Lisbon, nor elsewhere in Portugal, nor at any other Portuguese bakery around the world. It arrived to my table warm from the oven with a cannister of cinnamon and another of powdered sugar to tap on a dash of.

I picked up my pastéis and took a moment to admire its formidable mass. Its density was akin to that of a dying star, as if an entire solar system were compressed into this two-bite bundle of joy. The massa folhada pastry shell crackles when bitten into, shattering into hundreds of crisp, paper-thin layers. And when the cramelized basket of dough broke, its contents poured forth onto the tongue: the luscious, creamy, glossy-rich custard. Boasting a bright yellow color from happy, healthy egg yolks, this velvety smooth substance was flavored with just a touch of vanilla bean, which spreads its fragrant floral flavor over a canvas of clean dairy and egg. It’s so good; I closed my eyes as I devoured the thing slowly, sensually, glad to have turned away from the masses so that I may enjoy this very private, very intimate moment in peace. And as the last bit of warmth and sweetness lingered in the back of my throat, slowly fading, I sipped the bitter, acidic espresso, which cut the pastéis out completely. A finite experience to appreciate fully and move on, or risk staying at this bakery in Bélem forever.