My Boston has changed a bit recently, as I find myself spending most of my time in a ritzy green suburb between Davis and Porter Square, quite a big change from being 2 blocks from Fenway Park in the bustling Kenmore-BB Fens. Not better, nor worse. Just different. Maybe good different for me, specifically, considering my relationship with Boston. Seeing home from a new angle during this visit makes it look like a beautiful city for the first time in a long while and not a nest I once needed to force myself out of. And Davis Square has always been on my cool list. It’s young and accessible, hip but not overhyped. And in the summer…. Well, everything looks better in the summer.

Yesterday after a long awaited reunion with the elliptical and two 7.5 pound dumbbells, I decided to drop in on the Davis Square scene I had been gazing at for hours across the BSC gym window. During commercial breaks I scoped out Mike’s and Diesel Cafe, the happy Lesley U, Harvard and Tufts kids walking in and out, sitting around with Happy Hour beers and baskets of numnums. I wanted me some of that. So I met up with my mom after her table tennis practice and decided to hit up a relatively new establishment nearby, one whose margaritas she swore by, The Painted Burro. I was excited about visiting the place as it is the year-old baby sister of Pizzeria Posto nearby,  whose wood-oven deliciousness I’ve been raving about for years.

I tried a House Margarita, a Cucumber Margarita and a Strawberry Watermelon Margarita (which I ordered purely for the watermelon garnish, since I am still a small child at heart). All three were pretty good and they should be, considering the place’s vast tequila and mezcal program.

Apparently unable to say no to any empanada ever, I ordered the Dos Empanadas, which were filled with lamb carnitas and served with a little cucumber-radish salad, some yogurt crema and bright white cotija cheese cubes sprinkled about. These were okay. The fried empanada shell was crispy around the edges and showed off a plump little belly of filling which aroused the beast in me. Some parts of the pastry were a bit tough, however, and the effort needed to chew took the attention off the succulent texture of the lamb inside. The latter was really nice and soft, very moist shreds of braised lamb, but it wasn’t seasoned enough for me and ended up a bit bland, despite the mineral zing from the bleating meat. This was unexpected as I am used to carnitas which is almost over-seasoned as preparation to make sure that flavor stays in there during the slow-cooking process. Maybe the point here was to not overpower the charismatic metallic madness of lamb but it stopped a bit too short. The yogurt crema was nice, very mildly tangy but mostly just creamy and not unlike a puddle of sour cream. The cucumber-radish thing was pretty but needed acidity. Right idea but needs a bit of work. 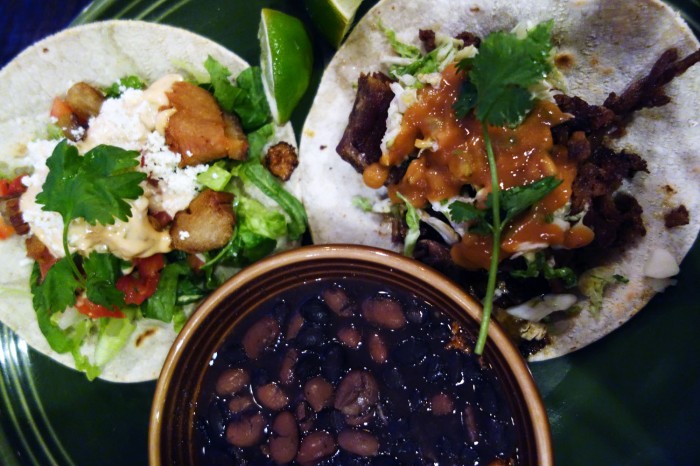 Seeing as how half of their menu is made up of $6-8 gourmet tacos, I decided to order two for my mom and me to try. I did this going against my instinct not to get tacos in the Northeast and my mom’s reminder that she hadn’t in fact ever had these off the menu before. But I figured I would be okay, as long as I avoided the Baja fish option. After all, if Lone Star Taco Bar can do it…

The dressed up tacos came out with a complementary side of pork charro beans which I appreciated. Salted bit of pork gave a great flavors to these beans, which were soupy enough to scoop up nicely with the chips that came to the table upon ordering food, but firm enough to not turn to mush after one bite. 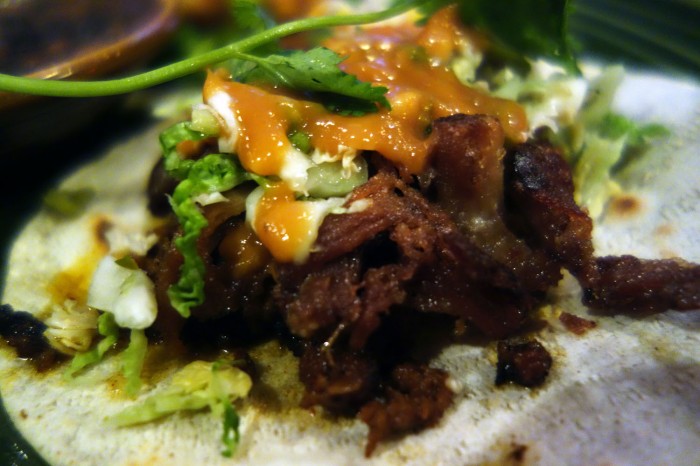 I got the Chupacabra which came with house-made chorizo, pork carnitas, pickled cabbage and some tangy sauce drizzled over, on top of a rigid flour tortilla that I could sense has never met a human hand before my own. Not a good sign. Biting into this thing I was expecting the chorizo to gush out its salty, smokey juices and hydrate juicy shreds of slow cooked pork in my mouth. It didn’t turn out that way. The carnitas was too dry and rough to hydrate, almost difficult to chew. This goes against the very definition of carnitas. The chorizo was likewise dry and I would’ve actually appreciated a bit of excess red grease dripping off the make a bite of this thing easier to swallow. The sauce over the top was fine but nothing too special. For a 3-bite taco to cost as much as a sandwich I expect the protein within to be flawless – marinated with some exotic berries and herbs, smoked or slow roasted on fancy species of wood, finished off with a perfectly piquant sauce containing 5+ ingredients. This dry piece of shoe leather was definitely not worth even half the price.

Next up, their BLT & Cheese Taco with “crispy pork belly, pico de gallo con limon, romaine, “Salsa Mil Islas”, cotija.” So basically pico de gallo, lettuce, Thousand Island dressing and more of that cheese they probably have metric tons of in the back. The pork belly in this case was a disaster or, better said, not pork belly at all. It was pork rind in both flavor and texture. Now, don’t get me wrong, I have nothing at all against pork rinds. I love the stuff as chicharrón in Mexico and I love it equally as much as tepertő in Hungary. It’s okay in hot pots in China too. It can even be spruced up and doused with yuzu juice to gourmetify it up a bit. But when it appears under false nomenclature and I’m expecting pork belly, pork belly, pork belly and what comes out is the driest, least flavorful, most over-fried version of pork skin I’ve probably ever had I get pissed. Especially when the 4-5 pathetic lumps of it are tossed onto lettuce on a dry  tortilla at a $6 price. I guess pork belly is an “in” food item these days and places like this can take advantage of the fact that most people just don’t know what good pork belly actually feels when it’s melting into a puddle of love on one’s tongue. They know they can get away with selling fried gouch as a $9 appetizer as long as they call it by the name of its trendy and way more successful relative. Not cool.

Good margaritas, good overall vibe, and a done-before-and-way-better menu is the name of the game at The Painted Burro. Plenty of great places near here but this will not be a go-to I recommend.

One thought on “Not-So-Great Nums at The Painted Burro”