I was pretty excited when I heard about Mike Isabella’s new sandwich shop, G Sandwich, opening on 14th and W.

I’ve had a good experience at Graffiato on my visits there for lunch and dinner. The wood oven pizzas are solid and everything on the menu shows a hint of creativity (I’m especially a fan of the burrata + sweet kumquat combo). I have also really enjoyed the Industry Takeover Nights as these showcase Isabella’s love of a good ole’ time – invite a bunch of chef friends over as if to his home kitchen, let them make whatever the hell they feel like eating themselves and down a few shots of the good stuff to help deal with the hungry throng of zombie-like food bloggers on the other side of the counter. He’s cool and his restaurant is cool by extension. So when I learned that a more low key sandwich shop was in the works, I knew this would be no regular ham and cheese shack.

I was thrilled when I realized it was opening a few blocks from my apartment (kudos to Isabella for recognizing the U Street Corridor) and that it would be in its juicy puberty stage by the time my dining companion was visiting me from distant lands, hungry for decent sandwiches not so common in his country. I was even more thrilled when I heard it would be adjoined to a Greek place, also acquired by Isabella, which would feature two wood fire ovens with rotating spits. Sandwich fillers at G? Quality lamb, goat, duck, chicken, and suckling pig roasted WHOLE all day on these spits. Sounds good to me.

Off the G list of house-made sodas I tried the Cantaloupe & Dill, which was wonderfully refreshing and a very interesting combination of flavors I wouldn’t have thought to put together even in a salad. The sweetness of the cantaloupe was not overpowering and the soda wasn’t sticky from sugar. The very light natural sweetness was complemented by the sharp, tangy green flavor of the dill. Carbonation was nice and kept it fizzy and light. I will definitely be returning to have this again, along with the Watermelon & Fennel, which also sounds like a summertime winner. 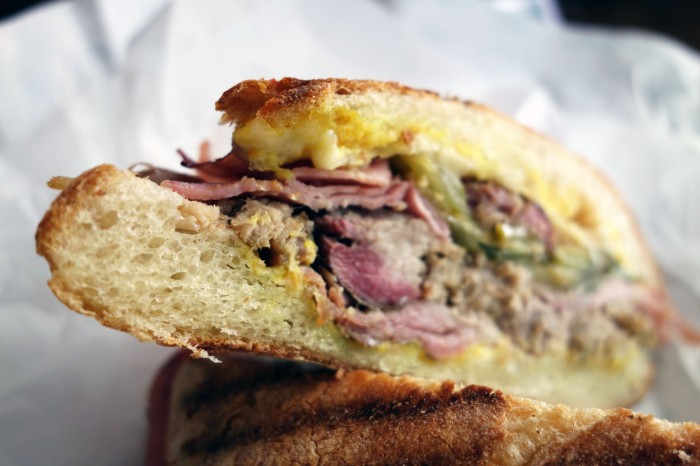 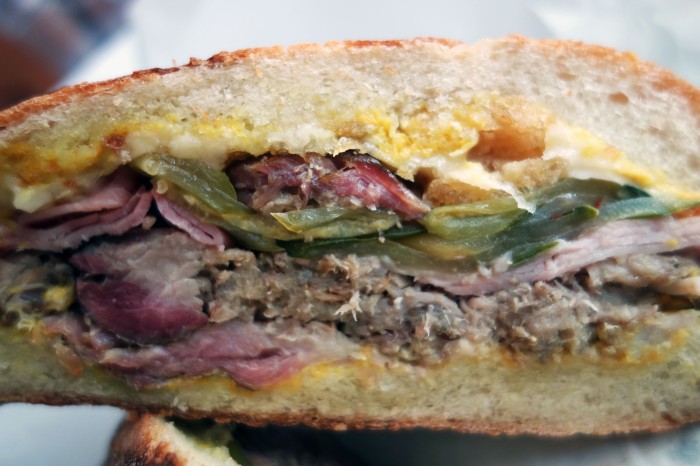 One of my favorite sandwiches is one my boyfriend happened to order our first time there, the Miró-ian, pressed Cubano Panino. I liked about this Cuban sandie that it wasn’t too far from the classic, remaining true to the most widely know definition of a Cuban sandwich. The two preparations of pork in this case were a succulent roasted pork collar and a salty, slightly lighter prosciutto cotto (Italian for “ham”). The cheese was Swiss, true to custom. There was also a smear of tangy, spicy yellow mustard and crispy, acidic hella-refreshing wonderful, fantastic pickles. The flavors of the two meats went together well and the cheese melted just enough to glue the bread to the rest of the ingredients. There was just enough Swiss to give the sandwich a nutty flavor. The pickles were spread out into a smooth, crunchy layer, adding a great bite and hydrating the sandwich with its briny jus. I was very impressed by the quality of the bread as well, pressed to a toasty, crunchy consistency and in perfect ratio to the filling. It was crisp without being dry and seemed to hold out well against the moisture within, making it a perfect sandwich to take to go as well. I heard around town that Isabella was planning to sneak a few bits of chicharron into these sandwiches to give them an extra hint of crunch and juicy fat and salt. I don’t remember any chicharron in my bites but it easily could’ve been in other patches of the sandwich and if so, it’s an addition I support.

A fantastic choice off the Wood Roasted Sandwiches list is the Spiced Baby Goat with a harissa mayo, some piquant lemon potatoes and plenty of oregano on a crunchy, doughy baguette. The meat was incredibly tender, sliced or just picked straight off the spit. The goat had a wonderfully subtle gamey flavor to it, similar to beef but milder and, despite a few juicy fattier bits, much leaner overall. The potatoes were a nice addition and I really appreciated that they were marinated in a citrusy base. The flavors of the lemon made the spuds tangy and refreshing, which made it possible for them to lift up the sandwich instead of weighing it down and overpowering the mild goat with starchy, thick texture as I was half expecting them to. The fresh basil and bit of dill in there were nice too, adding an herbal depth to each bite. 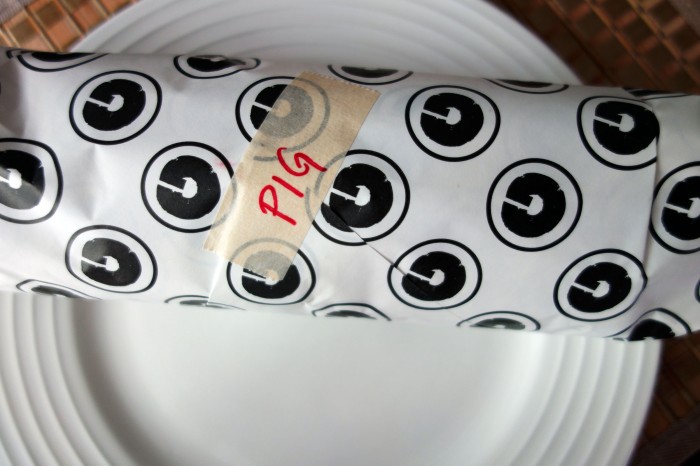 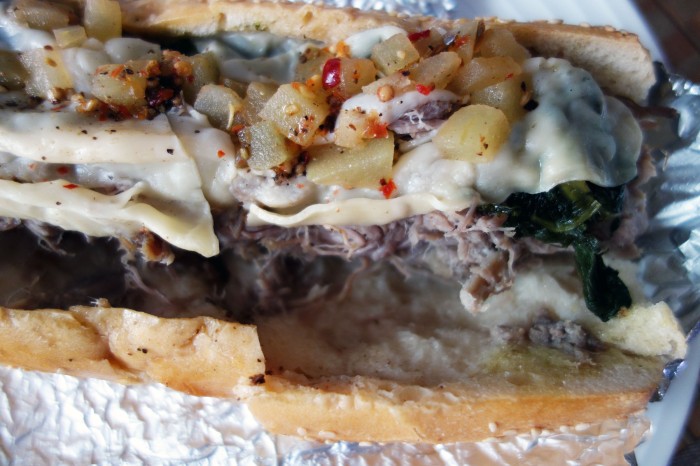 Also out of the wood oven comes the Suckling Pig sandwich on a chewy, soft hoagie roll. Uneven bits of juicy spit-roasted pig are pulled apart and served in a nice clump, mixed with sauteed mustard greens, topped with a few slices of melty provolone and some spicy apple mostarda. Strictly for the hungry, this is one hearty sandwich. I could only finish one half and continued snacking on the other for 2 days afterwards. The meat was delicious, its flavors allowed to develop nice and slowly on the spit. The moist, juicy pig met well with the slippery, wet greens and though there was no textural contrast, the greens added a peppery hint (still there after cooking it) to the meat. The cheese oozed over, adding not too much flavor but a layer of sin for sure. Flavor was brought in by the chopped bits of fresh, zingy apple which were speckled with chili peppers and their seeds. The combination of acidic apple (though I’m not sure if it’s really a mostarda, since I didn’t detect any candying) and hot chili trickled down to the meat, rounding out the flavors in the sandwich. The only qualm I had with the Suckling Pig was that the texture was pretty uniform throughout – soft, warm and chewy, with the exception of the cool apples. It might have been nice to have a crispy element in each bite, maybe by having the bread pressed and crunchy.

For a much lighter sandwich, the most popular choice seems to be the Chicken Salad Sandwich, and I can see why. This one comes on crunchy, whole wheat sunflower seed toast. A thick layer of flaky, soft chicken salad is topped with a crunchy, smokey slice of turkey bacon, which in turn is topped with ripe, buttery avocados mixed in messily with fresh lentil sprouts. The shreds of chicken in the salad are very tender and the salad itself is just creamy enough without dripping of mayo. A bit of red onion is thrown in for a crunch and a zing. The mushy avocado has a similar texture as the chicken salad, but since the two are separated by the layer of bacon they don’t blend into one but keep their own characteristics in tact. The campfire flavors of the turkey bacon permeate the otherwise mild chicken salad and give it a great boost in flavor. The crunchiness of the bread contrasts the mushy fillings. Healthy but filling and the perfect sized sandwich.

G also has a pretty varied Marinated Vegetables menu, off which I ordered the Blistered Peppers. They were nothing like what I was expecting them to be – a few whole roasted peppers to eat as a side to the sandies. Instead it was more of a chunky, well-oiled spread to scoop up with pita chips or layer onto bruschetta. Lightly roasted smokey-sweet red peppers, tangy capers, a bit of minced garlic and long, silky strands of onion in oil and, I think, a bit of vinegar. Really good though I’m not quite sure this was meant to have as a side. A take away container of it is great to have around the house though.

A good sandwich side is the Giardiniera, with baby heads of cauliflower, slices of carrot and thin slivers of onion, very lightly pickled with white wine vinegar and seasoned with crushed red pepper flakes for heat, Chicago-style. The vegetables are more so marinated in the vinegar rather than pickled in them and they retain a firm crunch which makes this side a very refreshing, crispy cool salad.

G Sandwich is the perfect new addition to the already pretty damn great U Street Corridor-Logan Circle neighborhood. It fills the essential role of the neighborhood sandwich shop, offering a great environment for lunch breakers and the funemployed alike to grab a snazzed-up version of this midday staple. There’s something on the menu for everyone: intricate spit-roasted animal creations for the gourmands; turkey and cauliflower sandies for health nuts; meatball subs and meaty “heroes” for the Italianos in the hood. Both times that I’ve lunched at G, Isabella was there running around in the kitchen, talking to patron-friends, actively involved in the upbringing of his new opus.

At dinnertime the place gets fancy and Euro-Italian, serving up a tasting menu in an antipasti-primi-secondi-dolci style. Sunday nights’ “Gravy Menu” allows Isabella to connect back to his Jersey roots with a menu that features laid-back, family style red sauce-white sauce pastas and fried calamaroons. G Shop is a bit like a playground for the chef to explore the different styles he is most comfortable with – artisanal sandwiches at lunch time, an elegant ristorante meal at dinner and homey Italian-American pahhhms and gelato sundaes on Sundays. Although I’ve only been for lunch, I’ve hard good things about the multifaceted nature of G, chiefly that it gets away with it without appearing too schizo. Job well done.