Having had a great dinner at Highland Kitchen a few weeks ago, I decided to return for their brunch, which I’ve been hearing good things about for some time now. I was particularly enthusiastic about their Chicken Liver Omelette. I knew this would be great because of how well the kitchen treated the organ in their Chicken Liver Toast, a dish I ended up raving about before after my first time there. Other options promised to be quite satisfying as well, definitely a stick-to-your-ribs kind of eating experience perfect for a slow, rainy Sunday morning. I decided to take my mom as my date.

We got there promptly 15 minutes after start of service (11:00am) which wasn’t really a good idea, considering the fact that table-turning didn’t start until the first seating was cleared out. The place was packed and even the bar seats were reserved for the hungry brunch crowd, leaving only an awkward space between bar and dining room to stand, stare at people lucky enough to already be eating, and wait. Luckily brunch does not take too long to make or to eat, so after only a half-hour wait and one standing mimosa, we were seated. People know what’s worth waiting for and there aren’t too many places in Somerville that are as well known for good food; if anything the crowd was a good indicator of quality rather than an annoyance.

As coincidence would have it, we had the same server as I had during my dinner there a few weeks before and she was just as awesome as last time. And she remembered me, which made me blush. Anyway, onto the food. 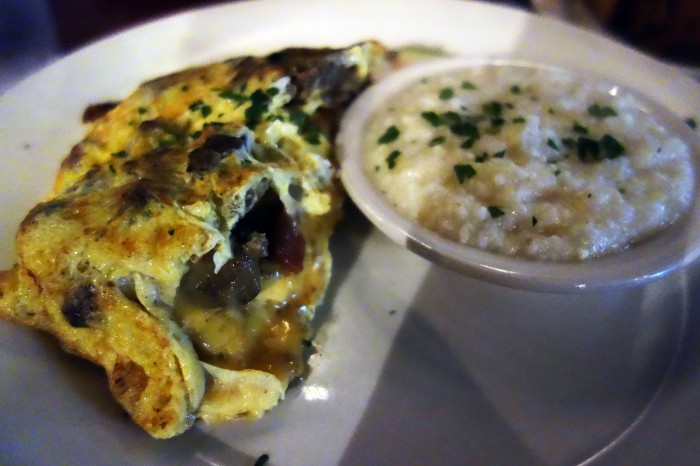 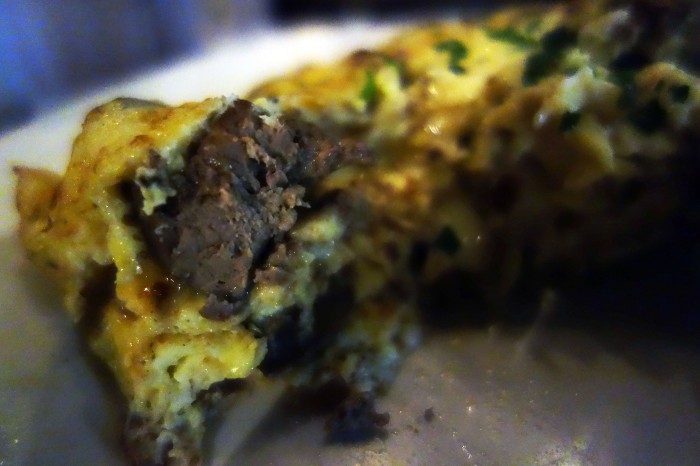 I, of course, ordered the Chicken Liver Omelette I had been drooling for since I heard of it, and was not in the least bit disappointed. I had thought that the livers would appear in the omelette as patches of the stuff that was on the toast – the mushy, soft, liver spread instead of whole livers, melting into their eggy blanket as patches of mozzarella do onto a pizza. And it might have been even better that way, though this version was great too. The livers had not been overcooked, so they still had a soft, slightly mushy texture instead of becoming tough and chalky on the inside. They poked out here and there from a large heap of fluffy eggs which were likewise cooked to a perfect texture. Some pieces of liver extending out to the surface of the omelette had crisped up against the heat of the pan and had achieved a caramelized, smoky quality on their exterior which complemented the murky, irony flavor of the parts hidden in the mess of egg. Pieces of bacon thrown in added a nice piggy saltiness that lifted up the innardy twang of the liver, while some gooey soft cheddar cheese held everything together. The omelette was served with a choice of homefries or grits as a side. I chose the grits, which came out creamy, buttery and extremely comforting. I appreciate that they were not over-salted, as grits sometimes tends to be when not handled by experts. They had just enough salt to allow the sweetness of the corn to have its say and they were very difficult to stop eating. 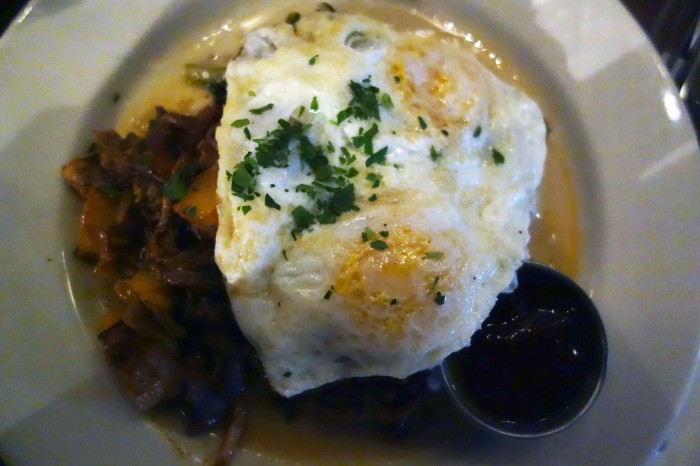 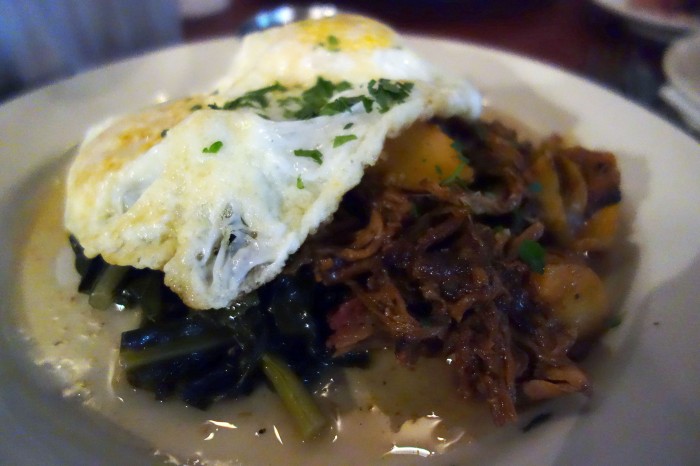 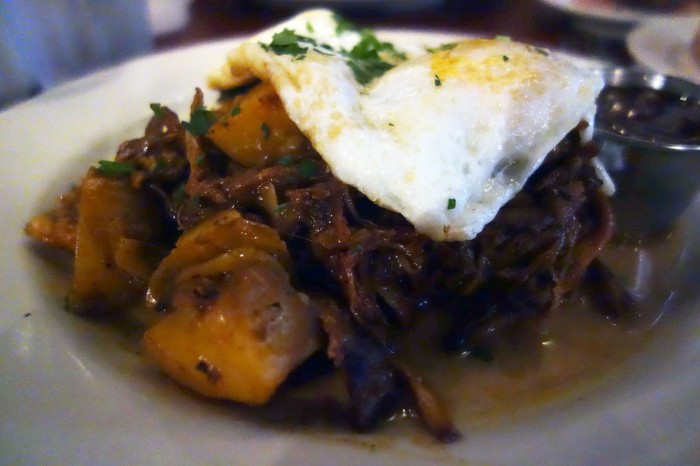 My mom ordered the Smoked Pork Hash which came with a fair amount of collard greens and two fried eggs lain over the top. We had debated between this and the Dirty Bird but, both of us being pretty avid fans of pulled pork, decided on the hash. I recommend getting this dish only if you’re hungry, as the serving is huge and the food on the plate is impossible to not finish. The pulled pork had a wonderful smokey base flavor to it, which was not overpowered by the tangy, sweet Carolina-style BBQ sauce it was slathered in. The meat was juicy, and came in unevenly sized, tender chunks mixed with thin strands here and there. These were mixed up with bite-sized cubes of hash brown potato (soft, but with a bite left to them) as well as a few big pieces of smokey, salty bacon. Next to the barbecued stuff were the collards, which stood up to the meat in flavor. They were moist but not too watery, buttery soft but not overcooked, and they carried with them the flavor of the pork butt they had been cooked with. Salty, slightly smokey and good enough to eat a bowl of alone. The two fried eggs over the top weren’t particularly interesting, though I appreciated that the yolks were cooked to a point where they could still run and ooze all over the sticky, sweet barbecue and the leafy green collards. A shameful experience in gluttony, a sinfully satisfying heap of goodness.

Brunch at Highland Kitchen was everything I thought it would be. The dishes were kept relatively simple but had a creative edge to them and were executed perfectly. No cheese platters or orange marmalade, no toasted hazelnuts or avocado salads. Filling, comforting, nap-inducing Southern classics with a twist is the name of the game here. And I gotta say, I like it.