Somewhat disappointed by my first recent venture out to Davis for a drink and a bite to eat, I opted for Central Square when it came to discussing a venue for meeting up and dining with one of my most gourmande friends in Boston. Due to certain time constraints, though, I ended up having to stay around Porter that evening. She selflessly and wisely suggested Highland Kitchen. “If I’m trekking it to Somerville…” she said, “…might as well be for a place like that.”

We had both heard quite a lot of good things about HK, as it has time and again been listed among the most worthwhile restaurants around Boston to visit. It is a strong competitor in Munch Madness, consistently out-bracketing restaurants I know to be excellent. It beat my beloved Citizen’s Public House in this past year’s challenge and got all the way to the penultimate round the year before that. And it did all this without too much fuss or gimmick, a relatively simple place serving dressed-up American comfort food with a smile. Curiosity abounded.

Around 9pm on a Wednesday night the place was packed to the brim, but a seat magically became available when we got there. The vibe was good and lively, the more rambunctious bar scene spilling over just enough to the dining room, which is separated by a wooden counter running through the restaurant. Around 10, a corner of the dining room turned karaoke (it was that night), but not that pathetic, miserable, drown-in-your-scorpion-bowl type of karaoke. Just a little circus to go along with the fresh, complementary bread. The kitchen remains open til 11, which makes it possible for dinner guests to watch the craziness unfold, the bar and karaoke gradually take dominance over the atmosphere. Dynamic, cool, not overhyped but definitely the popular kid on the block. And apparently they do good brunch too. Go Somerville, go! 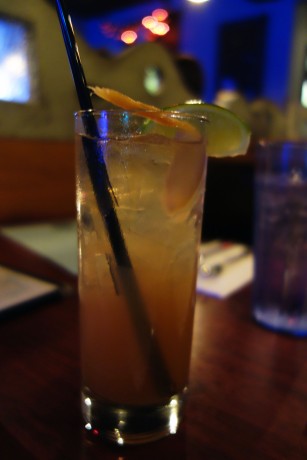 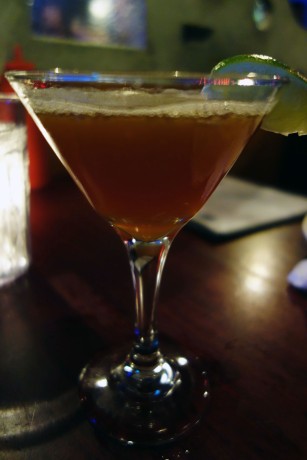 Off the signature cocktail menu, I first tried the Mark n’ Stormy, made with Makers Mark and their spicy, house-made chili infused ginger beer. The drink combined my craving for a slightly fizzy, carbonated beverage with my love of spicy cocktails and did so with my go-to whiskey base. It was exactly what I wanted as my first taste of a place I suspected would make me very happy.

For my second drink, our server recommended a local favorite called The Dorchester which came with vodka, triple sec and some pink lemonade. Unfortunately, in high school I mutilated my taste buds with horrible, very cheap, plastic bottle vodka and have perhaps forever primed my senses for an immediate reflex of repulsion when it comes to this particular substance. After a few sips, I decided The Dorchester was no exception so I asked to switch to the Periodista, made with Goslings rum, apricot brandy, Cointreau and lime juice. Showing 0 sign of annoyance our server brought out the new drink, which was delightful. 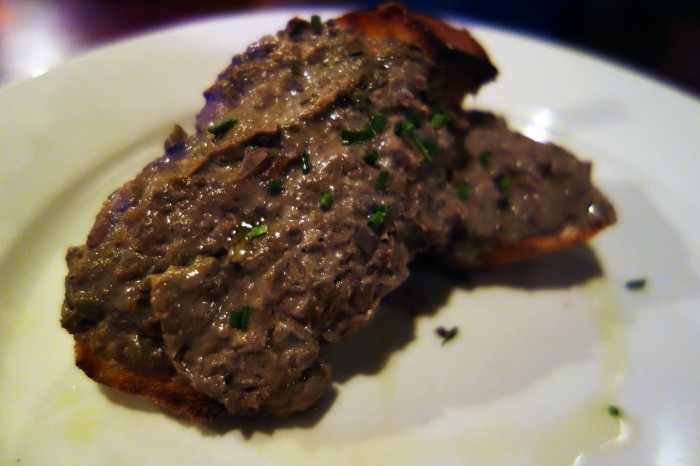 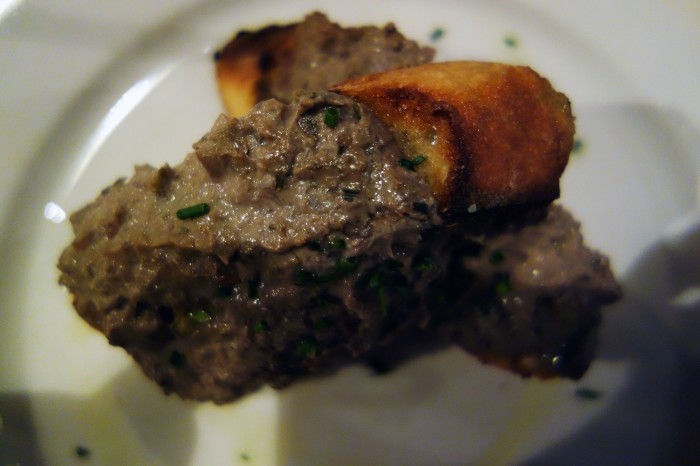 A great intro to our meal was the Chicken Liver Toast, off the snack menu. Considering the overpriced tiny artisanal charcuterie trend in Boston right now (where a teaspoon of fig jam apparently warrants an absorbent price), I was expecting a small dollop of over-pureed liver pâté  with a dot of green olive oil on a bread crisp the size of my fingernail. Instead, I got two standard sized slices of crunchy baguette toast shmeared with a generously thick layer of roughly blended chicken liver which hit all sorts of spots perfectly. The chicken liver was perfectly creamy, but with small bits of mushy soft livers and caramelized onions peeping out from the buttery base. In other words, it melted easily on my tongue but still had some textural intrigue. The flavor was spot on, with that metallic twang-alang of the liver left to showcase itself without any sort of weird cherry tapenade there to mellow out its harsh innard flavor. Only some dry herbs and pepper to round it all out and some fresh green chives sprinkled over the top for some color. Hearty, country, real. My mother happened to make liver and onions the following day and I pureed the suckers down in a futile attempt to imitate this dish. I heard they also have a chicken liver omlette on the menu on weekends. I’m definitely going back for those very soon. 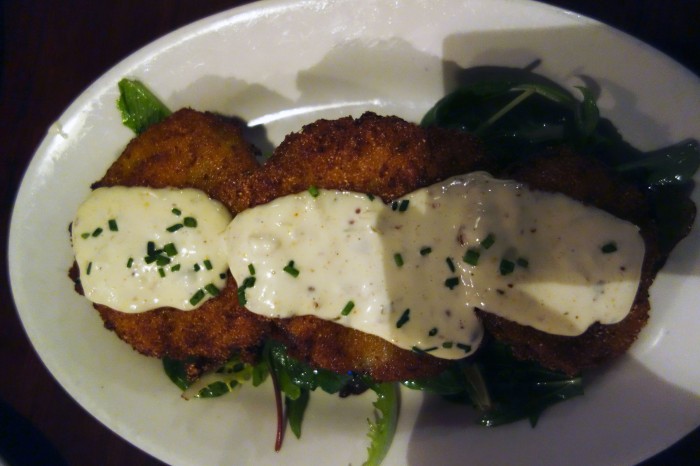 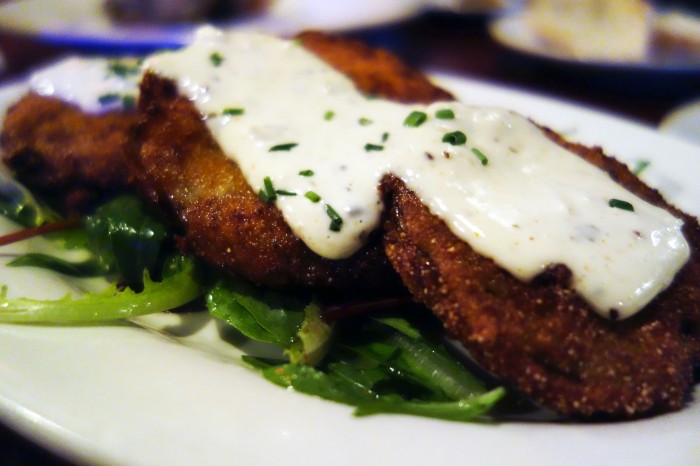 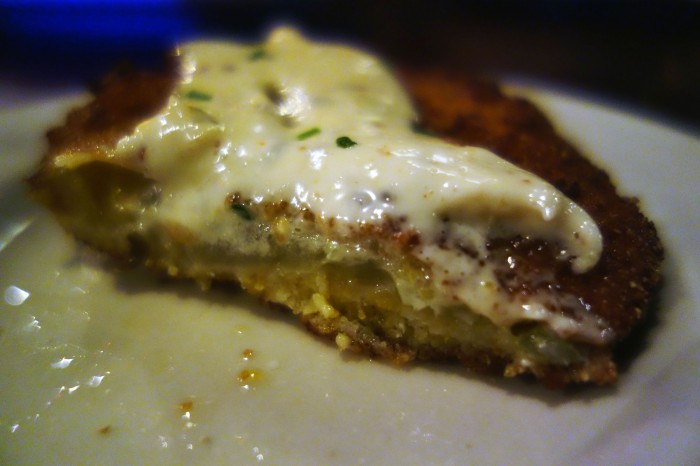 My friend had heard tales of Highland Kitchen’s Fried Green Tomatoes so we ordered those, also off the snack menu. These were good, though maybe a bit rigid for my taste. The breadcrumb crust was crunchy and flavorful, not too greasy, but the tomato itself was almost too firm and stayed a bit tough even through the frying. My tomato was also not proportionally thick enough to stand up to the coating. I noted, however, that my friend got a thicker, juicier tomato in hers so maybe mine was just having a bad hair day. The sauce over the top was nice, though I don’t remember it too well. It had enough acidity to cut the fried coating and a light heat from what I think was whole grain mustard mixed in. Creamy enough to grip and hold onto the coarse bread crumb crust, a good texture for this dish. 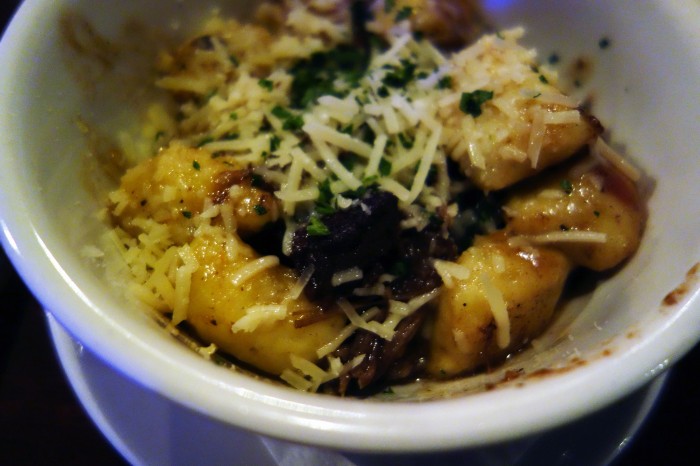 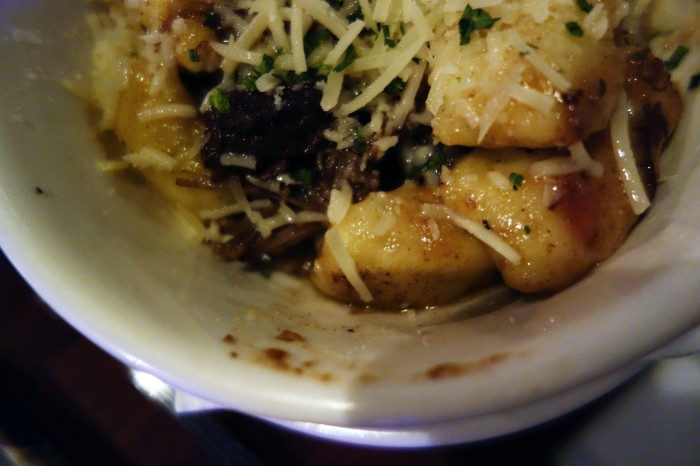 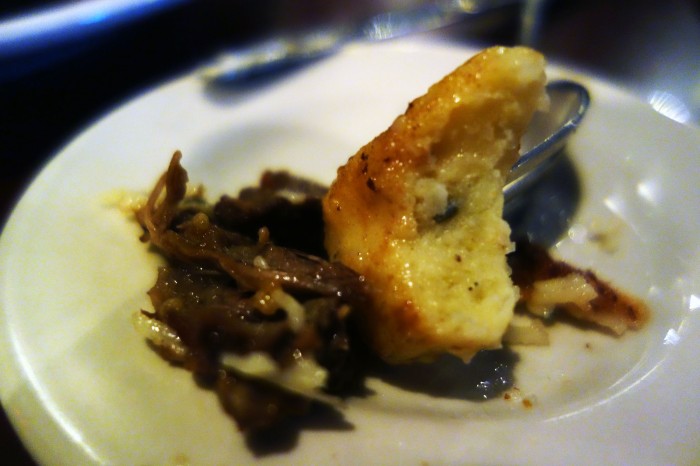 Next up, the Handmade Potato Gnocchi with short rib ragout and parmesan, which set the benchmark as the softest gnocchi I’ve ever had. In disbelief of how airy-light and fluffy they were, I took each delicate gnocco in my mouth individually and found I could swallow them after just one bite, easily. The dumplings were mixed up with wonderfully winey and flavorful braised short rib, along with its thick, luscious braising liquid. A bit of nutty Parmesan to bring these two ingredients together even more and add a hint of saltiness to the depth of the braised meat. Small enough to not be too heavy as a summer dish but definitely a fantastic one for the breezy autumn nights to come. 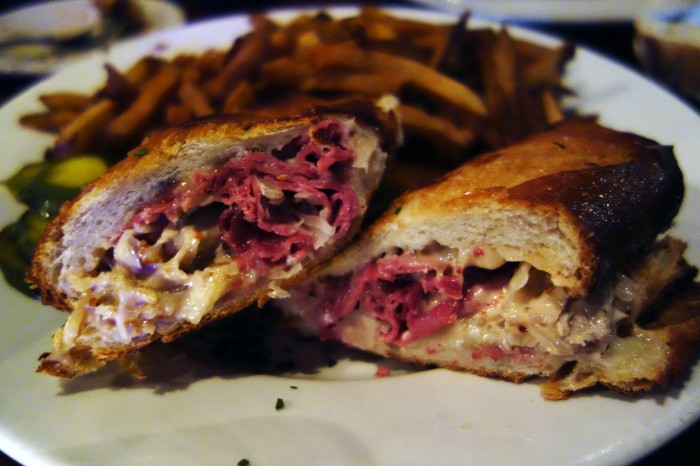 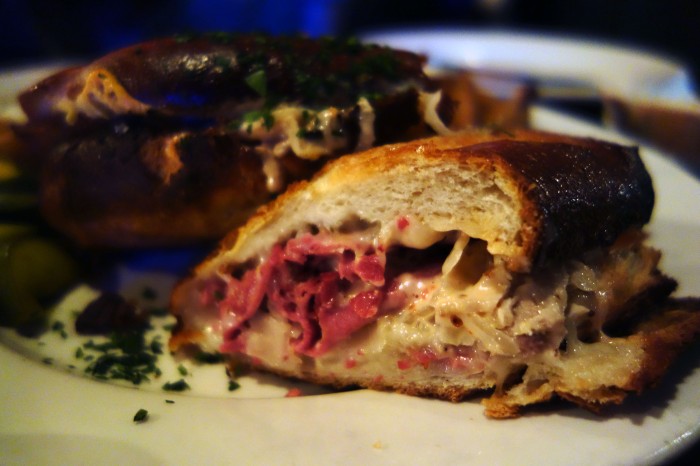 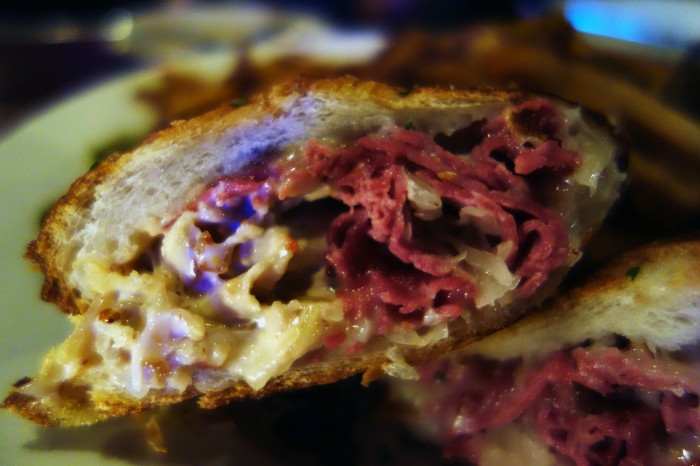 To share we also got the Cuban Reuben, somewhat of a signature at Highland Kitchen – a combination of two sandwiches I adore, and a clever combination at that. On the Reuben end, it was a grilled sandwich on bread which appeared a baguette but was actually a more buttery, flaky thing – almost brioche-like in flavor and crunch though a bit more doughy and firm on the interior. There was gooey, melty Swiss cheese for funky flavor as well as some house-pickled pickles for crunch and slight sweetness to round out the meat. In this case, the two types of Cuban sandie meat were a wonderfully succulent, juicy roasted pork and thinly sliced, very lean corned beef. The sauce that added the necessary hydration to the toasted sandwich was a spicy Russian dressing, which combined the classic acidity and creaminess of Russian dressing in a Reuben with the spice which would traditionally be brought by mustard in a Cuban sandwich. It was thus the single element of the sandwich which brought the two flavor profiles together and these harmonized very well. The corned beef doubled as a classic Reuben filler, its savory and meaty flavors complemented wonderfully by the acidity of the warm, tangy sauerkraut. The sandwich was large enough to share after all the little things we tried and was an immensely satisfying, juicy dish even for dinner.

Highland Kitchen is the place, I think, I was originally looking for when I ventured out to see what tricks Somerville has up its sleeve. I felt comfortable and taken care of from start to finish and everything on the menu seemed honest and good. A place to catch up with loved ones in times to come.