I received a pair of keys in the mail last week in a package sent from Texas to my apartment in D.C. They were to a friend’s apartment in Queens, NY. So I went there. During my 5-day stay I crossed over to Manhattan maybe 3 times, mostly for gourmet groceries and to see a friend who was staying in SoHo. And for a show at the Comedy Cellar. But mostly I stayed locked up in Queens, writing and resting and staring out at the wonderful skyline that my friend’s loft is blessed with. I made it a point to explore the neighborhood and, while pondering where to go, I remembered reading an article years ago, one written by a fellow Harvard foodie about a shopping mall food court in Flushing, whence hailed a certain Nanny named Fran. She had raved about this food court having some of the most authentic Taiwanese and Chinese food outside of Asia, with a huge variety of noodles, BBQ, dim sum and hot pot. The mall is approximately an hour away with the 7 train from Queensboro, where I was staying, and it was approximately 30° out with plenty of wind and a sun setting at 3:30pm. But the promise of authentic Asian food after being deprived of it in D.C. is just the kind of thing that makes it worth braving the elements.

The entrance of the building, off Main St. at the end of the 7 line, leads either to a ginormous Jmart on the first floor or through a maze of stores (Chinese travel agency, iPhone 6 cases… typical Asian mall stuff) and an escalator down to the food court. The latter is packed with people of all ages. Cool teenagers, married couples and families are gathered around huge communal bowls or slurping loudly over individual bowls of noodle soup. I think I only remember seeing maybe 3-4 other Westerners and they all had the same bewildered expression I myself was sporting. There are a lot of options and choosing is extremely difficult, especially when one actually has no intrinsic knowledge to base these decisions on. It basically came down to what I recognized to be good, what I saw was popular and what was served in a portion small enough for me to eat by myself. The entire time I wished there was someone by my side who knew what to get and could split things with me, certainly not because of the price (which in all cases was ridiculously low) but because of the quantity. Plus, eating a hot pot by yourself is just really sad. 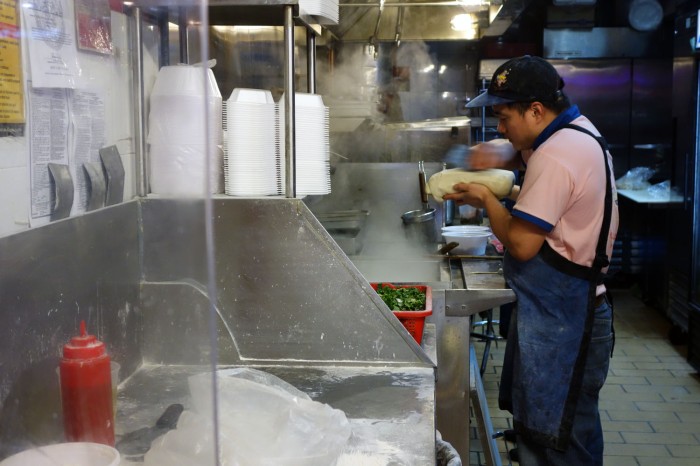 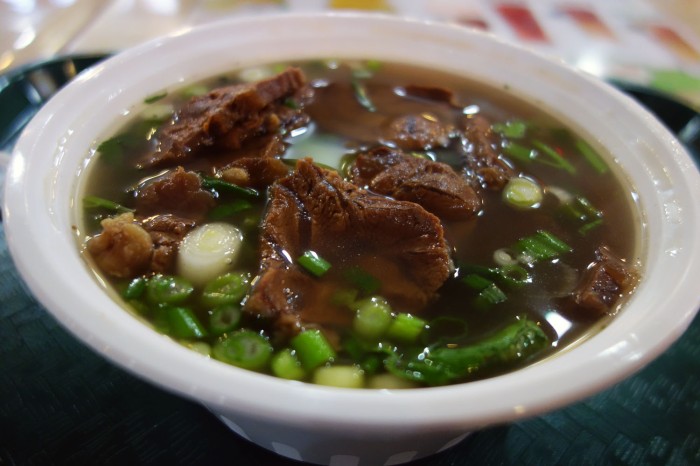 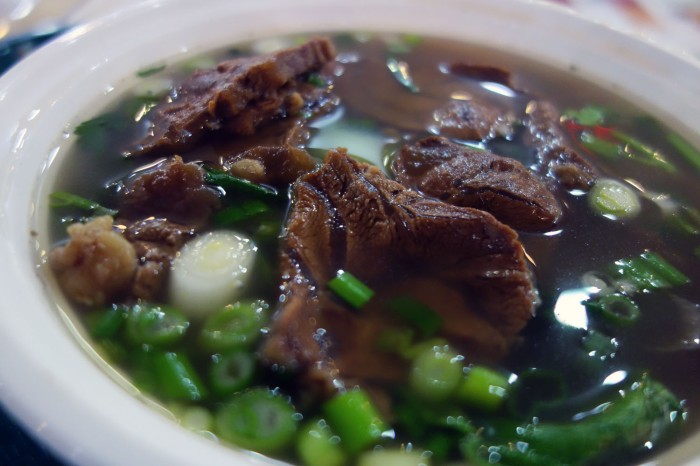 I circled the food court a number of times before I spotted a man getting busy with a lump of dough, kneading it, rolling it, pulling and stretching it with moves that seem to defy gravity. It was just the thing I was looking for, something to stand out among the rest as the perfect place to start. The place is called Lan Zhou Handmade Noodles and they specialize in noodle soups with a large variety in protein choice. There’s lamb, duck, oxtail, pork, beef, eel, fish ball. There’s tendon, tripe, intestine and something called “tube bone”. I kept it simple and ordered the Beef  Pulled Noodle which cost me $5.50. That’s a ridiculous price considering the portion (easily enough for two), the amount of meat in there, and the labor involved in hand-pulling the noodles until they reach a perfect texture, seemingly alive and kickin’ . They were cooked just right too – tight and springy, very slightly chewy and absorbing the broth to soften gradually throughout the meal. The strands were starchy enough to stick together from the humid heat, coated with a slippery texture that made them easy to slurp up but not too slimy. The meat was tender and flaky, if a bit fatty along the sides, which I did not mind in the least. Plenty of spring onions and crispy heaps of bok choy kept things fresh and light enough. Steamy, hot bundles of handmade noodle, flavored by the light beef broth warmed me up from inside out and made that long ride on the 7 totally worth it. 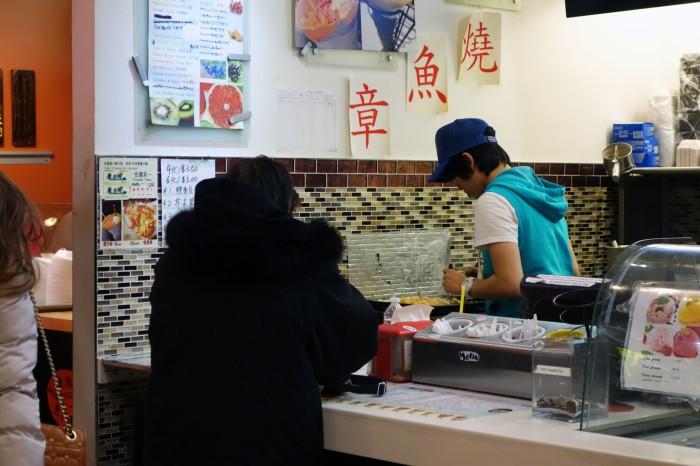 Look, it’s takoyaki in the making!

Next, I stopped at Yun Nan Guo Quo Rice Noodle to pick up some chicken parts to snack on later. They had head (3 for $5), neck and feet (5 for $3), from which I chose a few feet and one head chopped in half. I personally love chicken feet, because of the gelatinous, giggly texture of skin, tendon and fat. I will say that I only enjoy these limbs when they are heated up. When cold, the phalanges harden like cartilage and the fingers become stiff with rigormortis, as if actively pointing at the parts around it. The stuff of nightmares! But when warm, they become limp and loose, easier to handle and more enjoyable to suck the edibles off the bone. The tendon melts on the tongue, coating it with a sticky, creamy texture that is quite unique to the experience. These were cooked with a soy-based sauce made spicy with chilis that cut the fat nicely. While I really enjoyed the feet, I was not a huge fan of the chicken head, which barely had anything edible on it and which fell apart into viciously sharp little shards of bone and beak that hurt my gums horribly. The tiny, creamy little brain was a nice treat to scoop out with my index finger – mushy and soft, full of flavor -, but besides this the head was pretty barren of meat. 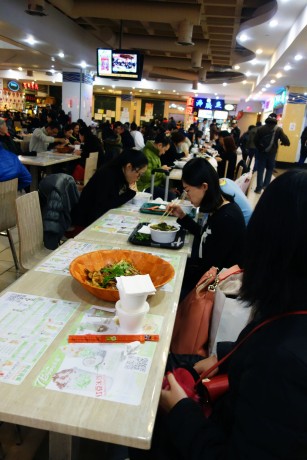 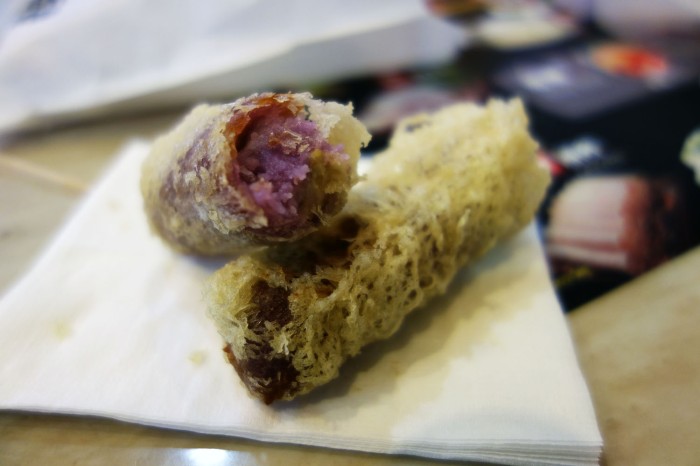 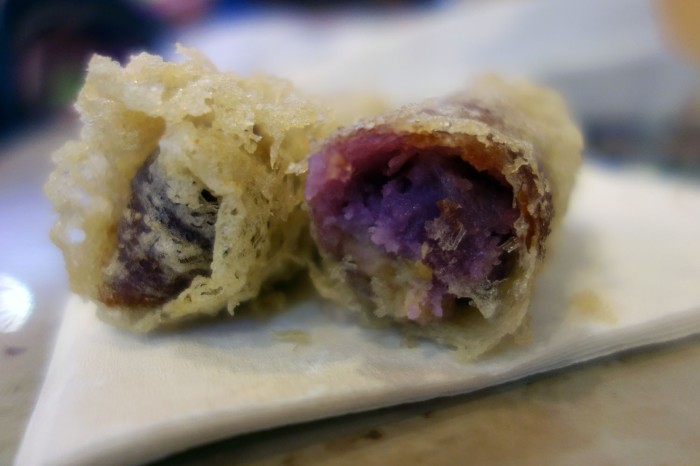 For some popular Taiwanese snacks and drinks, I highly recommend Tea Twitter. Besides their wonderfully crunchy and juicy tempura-style Salt and Pepper Chicken (of which I tried a sample… or three..), they also have a variety of sweet fried veggies, including bright orange pumpkin cakes, Panko-coated eggplant and my personal favorite, Crispy Purple Potato Roll. I’m not really even sure what the fried coating is made of, although I suspect it’s some crazy form of rice, rather than a milk-based batter. It’s like biting into a carefully woven web of thin strands fried lightly to achieve the perfect crunch without any excess grease. The little nest of strands is spotted here and there with crunchy crystals of sugar that make it a dessert. On the inside there is a creamy, frothy puree of purple potato that is buttery and rich, with a shockingly vibrant color that peeps out from its crispy casing. The soft puree contrasts the crunch of the exterior nicely and the vegetal sweetness of the purple potato is heightened but not overpowered by the caramelized pieces of sugar. Both the filling and the coat is surprisingly light, making 4 the ideal portion size for these. And at $3.50, a serving of 4 is more than worth it. I also ordered their Emperor’s Plum tea, which had a funky sour, almost briny flavor to it that I really did not care for, but that I imagine to be a popular acquired taste. They had quite a few other Taiwanese tea drinks available as well though, so I’m sure there’s something for everyone.

Towards the end I went with something a bit more familiar, from the New Flushing Bakery right near the first floor entrance of the mall. The bakery specializes in Cantonese style egg tarts, which I used to get on a daily basis in Hong Kong. The egg or milk custards come in a rather large variety of flavors, including apricot, strawberry, green tea, black bean and lemon. They’re basically Portuguese pasteis de nata, but slightly milder in sweetness to suit the Cantonese palate, which does not really dig sugary Western desserts. I got the Hong Kong Style Egg Tart. A bit eggier in flavor, the custard is soft and loose, with flaky pastry all around it. A nice treat, especially when heated up slightly, which is how they are always sold in bakeries in Hong Kong. Oh Katherine’s Bakery in Sheung Wan, how I do miss you! So much, that I often google maps you and peek in through the windows at all the mochi balls and tarts cooling in the window… If only these two people would move out of the way… 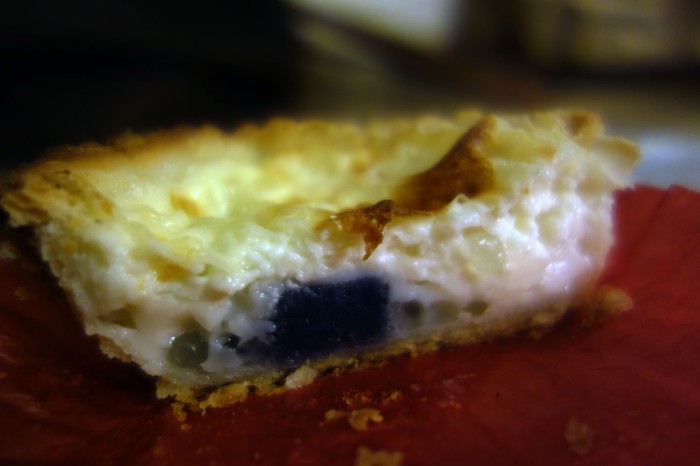 I also tried the Purple Sweet Potato Egg Custard, recommended by the girl behind the counter as her favorite. The custard was a bit lumpier in texture, almost like ricotta and was spotted with gummy little beads of sago. On the bottom of the tart there was a single block of purple potato baked to a soft yet firm consistency. Wasn’t too big a fan of this one. I didn’t really feel like the different elements of the tart harmonized well and, while I enjoyed the mild sweetness of the Hong Kong tart, it became a little dull here, as the potato contributed no flavor either. Nice in texture and maybe with a bit of honey drizzled over the top I’d reconsider…Maybe that’s just me being an insatiable Westerner. 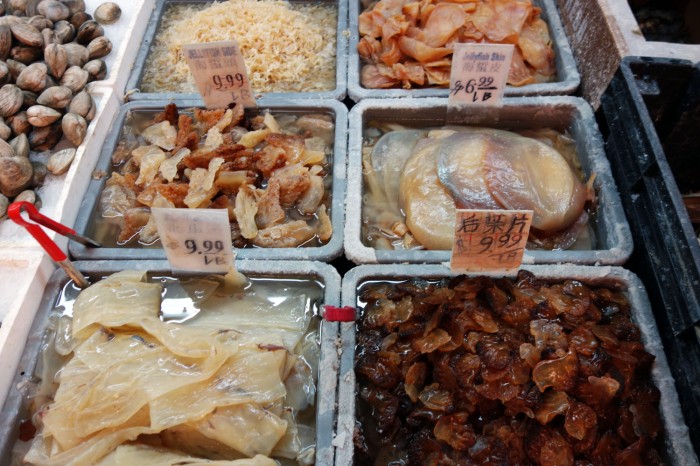 I walked off my dinner by exploring Jmart on the first floor of the New World Mall. The supermarket is over 30,000 square feet and has a really exciting mixture of products from China, Indonesia, Japan, Korea, the Philippines and Vietnam. Very much like a wet market in Hong Kong, seafood and meats are just put out there. There’s durian and there’s a ginormous variety of fish balls. Unlike a wet market in Hong Kong, they give away free samples of products pushed through promotion. I tried salted duck egg, some kind of fried springroll and a new type of sweet chile sauce on silken tofu. I also saw quite a few interesting things in the seafood department, including jellyfish skin, some very phallic geoducks, juicy razor clams and a large mound of green shrimp. Why were they green? I’m not quite sure.

As I had thought, the experience was overall worth the trip out to Flushing, although I probably would not go back alone any time soon. The food court at the New World Mall is a very social place, certainly not one to mope around in by one’s lonesome. That being sad, the food really is wonderful and there is a great variety of cuisines authentically represented in the same room. Whether one is in the mood for spicy Sichuan hot pot, delicate Cantonese dumplings or crazy little Taiwanese street food snacks, there are options for conservative eaters and adventurous ones alike. The winning tactic, I figured out, is not to look at the individual stalls but what people are eating, and to pick out what looks best to you. Either ask them to show you where they got it (and to confirm that it is indeed the best), or just go on an adventure to find it yourself.