I don’t know too much about Harlem, about its history or the many nuanced perspectives on its gradual gentrification. I do understand that Red Rooster has been an important part of that story, and that those who know more than I do have strong opinions on the role it has played in the process, for better or for worse. I do remember hearing about the restaurant when it first opened in 2010, back when I was just getting into the food world and stretching my writing muscles. Ten years later, this past February, my mom proposed going there during a trip to NYC. We had been staying at an airBnB a few streets away and brunch fit nicely into our program on our last day.

Red Rooster Harlem was pretty easy to find in the cluster of restaurants and bars near the 125th Street station on Malcolm X Boulevard. Walking in, there’s a large circular bar near the entrance and a more intimate dining area behind it. The walls are decorated with influential black historical figures, politicians and poets. The smiles seem genuine, though there is something slightly disingenuous about the place. The menu and decor both suggest that you’ve arrived to “the pioneering restaurant that has paved the way for fine dining in Harlem through elevated soul food.” Yet it seems a bit like the museum gift shop rendition of the Harlem experience, conveniently streamlined and condensed for people from the outside to easily understand in the course of a single mother-daughter brunch. I was half expecting to find “I ❤️️ Harlem” shirts and visors to take home as souvenirs to show the whole family that Harlem is now “safe” and open-for-business. Plus, soul food doesn’t really need to be “elevated,” does it? It seems so far beyond good enough already… In a way, Red Rooster kind of reminded me of a less subtle, more in-your-face version of Busboys and Poets in DC’s U Street Corridor, a place that stands as a cultural hub and social institution to all without necessarily shouting its admirable message from the rooftops. But then again, I’m basing all this only on what I felt walking into the place. Maybe there’s more to it. So with all that said, let’s get to what matters: the food. 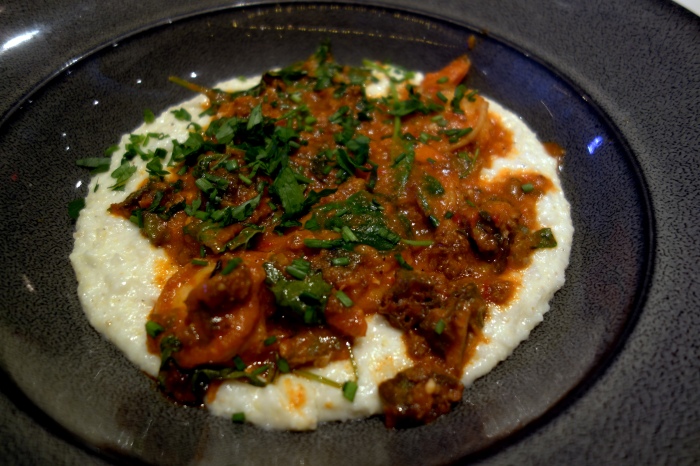 Poppa Eddie’s Shrimp And Grits was just what the doctor ordered on a cold February morning. On a bed of the creamiest, butteriest stone ground grits was ladled a bright gumbo stew made with tomato, spicy chorizo, tender okra flush with slimy seeds, seasoned with red chile powder and sweet paprika. And, of course, the plump and juicy shrimp, three or four big ones, soaking up the same red sauce and offering a nice tight, springy texture to the otherwise very creamy dish. Freshly chopped parsley and chives added a dash of green over the top.

My mom got the Miss B’s Croissant & Gravy, a halved croissant bearing strips of breaded and fried chicken, slathered with “dirty gravy” and a sunny-side-up fried egg on top. A modest salad of dressed arugula on the side. The strength of this dish lay in the quality of the chicken, whose caramelized coat stayed pleasantly crunchy even after it was drowned in the salty, thick gravy. Meanwhile, the meat inside remained moist and tender. The croissant was a tad dry for my taste but, well, I live in France. It did it’s job here to soak up the gravy and oozing egg yolk, providing a moist, decadent pillow of flavor to contrast against the crunch of the fried chicken.

Politics aside, the food at Red Rooster Harlem was delicious, comforting and prepared with skill. Very well executed versions of two Southern soul food staples, in no need of elevation.