Rice. Banana. Coconut. Egg. Sugar. Five simple ingredients which are combined and prepared in what seems like infinite ways in Thai cuisine to form an array of mouthwateringly delicious and texturally interesting sweets. Sickly sweet, sticky and creamy are descriptors of most Thai desserts. Subtlety is not. Delicious is. Street vendors carry a shockingly vast variety of them and they all seem to always cost 20 baht (60 cents). Might as well buy and try one of everything, right? Well that’s what I did. 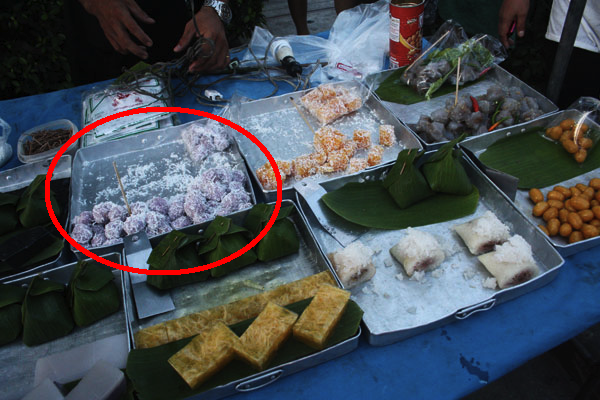 These purple little balls (dude gave me one for free) were super sticky and sweet a bit like raw cookie dough but lighter. They are called khanom tom and are prepared by boiling little balls of dough made of glutinous rice powder, coconut milk, grated coconut, sugar and a bit of taro in this case and then when it’s cooked (although barely…) it is rolled in more coconut shavings. Yummy but don’t think I could eat a whole bag of these as they would probably clog up my anatomy for a while. 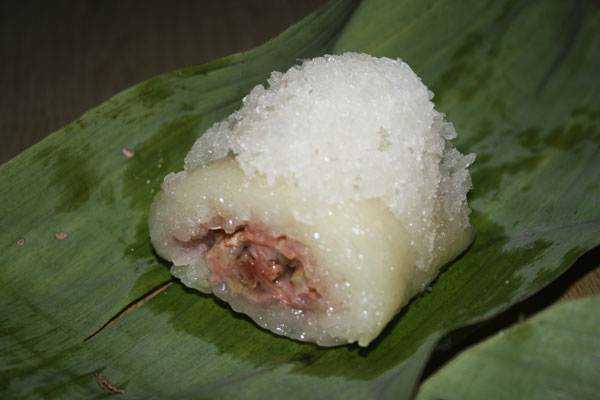 Khao tom mat sai kluai. Mashed up sweet banana wrapped in a layer of sweet sticky rice (I think made extra sticky with a bit of coconut milk), wrapped inside a banana leaf and steamed. Unwrapped and topped off with sugar and grated coconut. Rewrapped for easy transport and aesthetics. Not bad at all, but like most Thai desserts a bit too sweet for my gums. The rice was mushy and soft and creamy sweet as was the banana (which for some reason turned pink!) inside. The crunchy sugar-coconut topping added a bit of much needed textural contrast.

Khanom wun. A rectangular block of purple agar gelatin. Yes, the same agar, made from seaweed, which we use in lab petri dishes as bacteria food. So bacteria like it. So maybe we shouldn’t have been buying them at all. No idea where the color came from as it definitely was not an indicator of flavor, which this dessert simply lacked. At least the layer of coco it cream on top gave it a faint sweetness but otherwise…. Blech…. 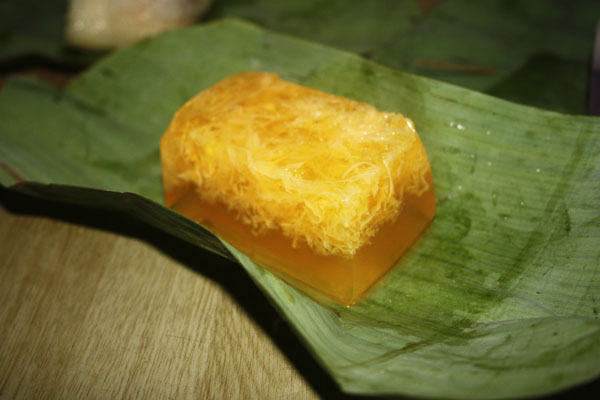 Another khanom wun, this one without coconut cream and thus even less flavorful than the first. Not really sure what those threads on the top are, maybe dried shredded egg yolk. But they did little to nothing to save this dessert from blandness.

Faktong Gaeng Buad. This one was served alongside watermelon and pineapple slices at our lunch buffet in Kho Phi Phi. Chunks of pumpkin caramelized and cooked in a cardamom, cinnamon, sugar mixture, served boiling hot and drizzled with sweet coconut milk. This was one of my favorites. The pumpkin was soft, bright orange and super sweet, rich in texture. The sweet spices brought out its natural sweetness and the coconut milk soothed the otherwise intense flavors of the cooking liquid.

Roti gluay. Banana pancake on the beach. Similar to another pancake I had later, but instead of being stretched out by hand from a thicker, stickier dough, this pancake was made in the French way’ on one of those round oven tops with the crepe thinning thing which always looked like a record player to me. The funny thing about this one was that it was literally attached to the engine of the motorcycle which drove and at the same time powered the food stall. Both the oven top and the blender (with which a mangosteen-mango shake was prepared for me) were turned on by the vendor turning on the engine. Awesome. Back to the crepe… Fresh mini bananas and slivers of fresh, wet, white coconut scooped out on the spot on the inside, condensed milk and honey on the outside. Chopped into squares and served with toothpicks for sandy hand beach eats convenience.

Khanom krok. Coconut griddle dumplings. A savory pancake mixture is poured into an iron griddle with egg shaped holes and cooked until little bowls are formed. These are then filled with slightly sweet coconut jelly and topped off with spring onion or corn kernels. Absolutely delicious and simple bite-sized snacks. The outside is a bit crispy and charred from the griddle while the coconut jelly inside is juicy, gelatinous and cool. Scallions and corn add a neat twist which bring the dish back over to the savory side, despite the sweetness of the coconut filling.

Sangkhaya fak thong. Had one of these at a market on my last day in Phuket. I had been eyeing them for a while and they were only 50 baht ($1.30) per slice so I decided I couldn’t leave the country without trying one. I was definitely not disappointed. A sweet, velvety smooth coconut and egg custard baked and served inside a Thai pumpkin. Again that combination of egg, coconut and grilled, sweet pumpkin which I found so simple yet comforting. Much like ice cream, I licked it in layers off my spoon and savored the sweet coconut flavor. The highlight was hitting the bright orange flesh of the pumpkin, also soft, super ripe and caramelized to a comforting, warm sweetness which offset the cool, lighter sweetness of the coconut custard inside. What a fantastic idea.

The next three desserts were from the MBK Bangkok food center, a gigantic food court on the top floor of a 6 story haggle-price mall (out of which one entire floor is dedicated to billions of types of phone cases and another to spectacularly convincing fake brand name items). The place is pretty much like a cleaned up dai pai dong, a collection of food stands that have been moved inside of a shopping mall. It took about 1 minute to convince my friends that this place is not the Western style, Pizza Hut – Taco Bell – KFC – Panda Express type food court, that this place is definitely worth sitting down and eating in. “You’ll see…” I was really hoping I was right and didn’t take us all out to this shopping mall in butt-ugly downtown Bangkok for no reason. And I was definitely not wrong. More on the savories I had there later. For now, the sweets: 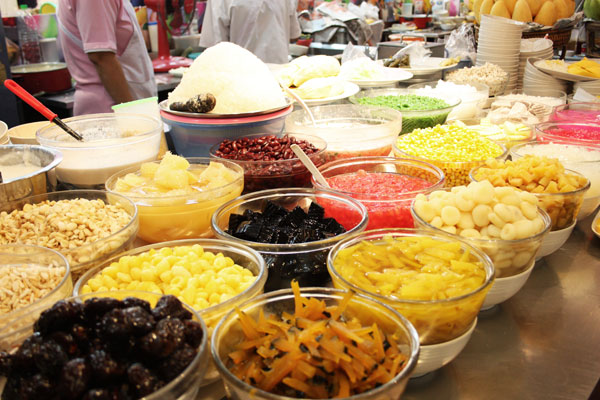 Nam Kang Sai. Shaved ice with coconut milk and stuff in it. Having already broken the “No Ice” rule with the street stall Thai iced coffee that morning, agreeing to nurse and care for any tapeworm willing to inhabit my lower intestines if it meant not missing out on delicious cool treats, I opted for this one on the spot. I had a huge variety of options, everything from dried mangos and dried ineapple, to fresh durian (ew…) to nuts to black chunks of grass jelly. I chose spring melon and —-. Shaved ice served in a bowl, drizzled with sugary syrup and condensed milk with a few spring melons and —- thrown inside for textural contrast and extra sweetness. The melon was perfectly ripe but not too sweet and still wi a bite which contrasted the cool crushed iced and e chewy hard —- beautifully. As thrice melted int the syrup and the milk, it created a sweet soupy texture which was very nice and refreshing. 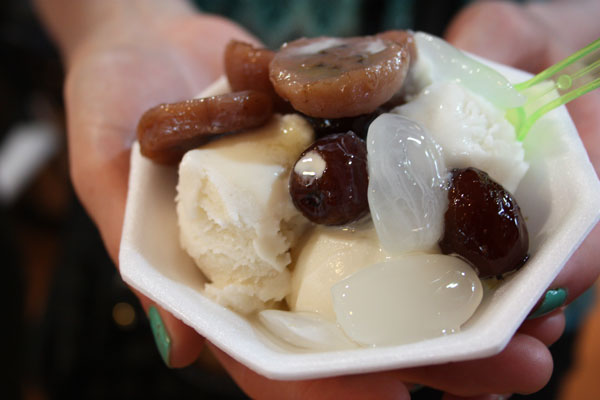 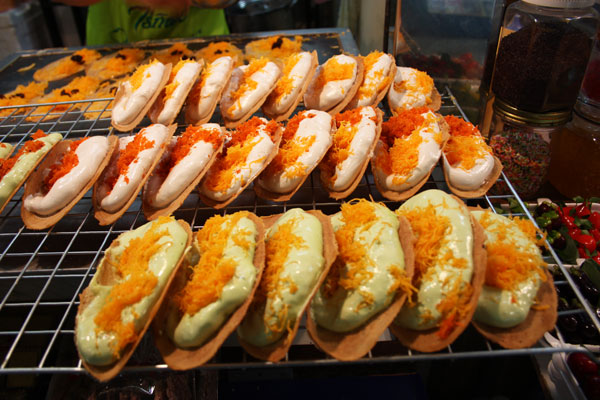 Next was something my travel companions and I agreed was the best and continued to get whenever we saw it on our trip. Khanom bueang. A very thin crepe-like griddle cake made of rice flour, cooked until crispy, folded into a taco shell shape and filled with a super light and airy, puffy cloud of whipped egg whites (pink and green food coloring to make them cool looking) mixed with coconut cream and topped off with foi thong (“golden threads”), strings of egg yolk quickly boiled in simple syrup until it dries out a bit and caramelizes. The egg white cloud was moist, sweet and airy and the lightness of it was further emphasized by the paper thin crispy pancake which cracked immediately when bitten into. The egg yolk strings added a bit of chewy, dry texture, making is a structurally complex and very interesting dessert. A bit bland on the flavor side though, simply sweet, like most Thai desserts.

We had a similar dessert in the Patong Beach night market. Khanom Tang Taek. A crepe which was a bit thicker and chewier (but still very light and airy) which was made in a shaping iron instead of just lain flat on a pan. This cake was flipped over to form a taco pocket which was filled with shredded coconut, bits of dry egg, sugar and a few sesame seeds which gave it a slight nutty, oily flavor. Not as delicious (I missed the egg white fluff) and a bit too chewy because of the shredded coconut but not bad at all.

That’s all for now…More sweet things to come in another post! Stay tuned.