Another great little empanada I had was at a place called Zitto on easy-breezy Ave. Sarmiento in the heart of Mendoza. I guess the place is known more for its pizzas than anything else, but an important thing I’ve learned during my time in Argentina is that a place with good pizza is guaranteed to have decent empanadas. They cook in the same oven, after all.

We arrived in Mendoza in the morning and by 11 my companion was on the prowl for this place, with one particular dish in mind: the shrimp empanada. It wasn’t something I was particularly excited about. Living in BsAs I had grown jaded towards seafood, especially shellfish. If something comes with shrimp, it usually means rehydrated bits of dried out baby shrimp, leathery and rough little suckers that are strenuous to chew. I never encountered the plump, tight, meaty guys I had grown accustomed to in the U.S. No snap when bitten into. No sweet, clean, milky white flesh. So when I was told we’d be eating empanadas de camarón, I pictured a filling of greasy melted provolone with a few sad little tadpole scampi drowned into the sticky stuff. This was not at all what I got.

The pastry had a crunchy, pizza-crust type dough with some caramelization and char at its extremities. The filling was a delicious mess of juicy, plump shrimp chunks and velvety crema smoothing it all out. The pieces of shrimp were sweet, soft and tender, resembling lobster tail in texture. What shocked and impressed me the most was that they actually tasted of the sea. Little green bits of shrimp guts were visible through the translucent flesh, a sign that this thing had been alive and active in water not too long ago. It wasn’t the flavorless, polished, plastic shrimp I had gotten used to in BsAs. It was a savory, moist bite with textural complexity that kept me interested through to the end. It’s not often that seafood is baked into crunchy, caramelized dough and when it is, it’s something to stop and enjoy fully. We ordered three to share but I could’ve downed all three myself with a side of white wine, while people-watching on the sunny street. 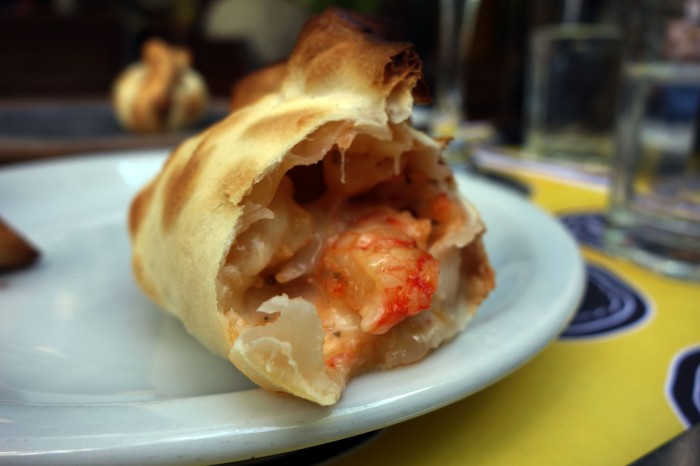 I don’t have too many recommendations when it comes to the touristy restaurants lining Sarmiento but Zitto’s shrimp empanadas stood out as a light lunch I would go back for. It turns out seafood in Argentina is not always a letdown. Maybe Mendoza is close enough to the Andes to get its shellfish from Chile, where they’ve perfected seafood. Lesson learned.