One late night place I’ve grown particularly fond of lately is Julia’s Empanadas at DuPont. It’s a great little spot to visit after a long night of DuPont Circle merriment, a good meeting point and a good place to loiter around and smoke a cigarette while your group decides what is next on the night’s agenda. There are people outside constantly, but the line moves quickly, due in part to the simplicity of its menu.

They make six types of savory empanadas and one sweet fruit-filled one which sells out pretty early. People quickly choose the one they want and by the time they get to the register, the only thing left is for the guy to grab one out of the oven. And they are grabbed fresh out of the oven, piping hot. They cost around $4.00 each which, for the size, freshness and quality of ingredients used, is more than worth it. Sure, I can sit here and bitch about how in Buenos Aires empanadas cost $1 each. But I’m not going to do that. Why? Because in Argentina a bottle of ketchup is like $10. It’s all relative.

I paid a visit to Julia’s again this weekend when my friends were visiting. After a few too many Mango Mojitos at Cafe Citron, we needed something hearty to soak up all the fun and a crispy, warm pocket of bread filled with all types of saucy protein seemed, as always in this situation, the perfect thing. 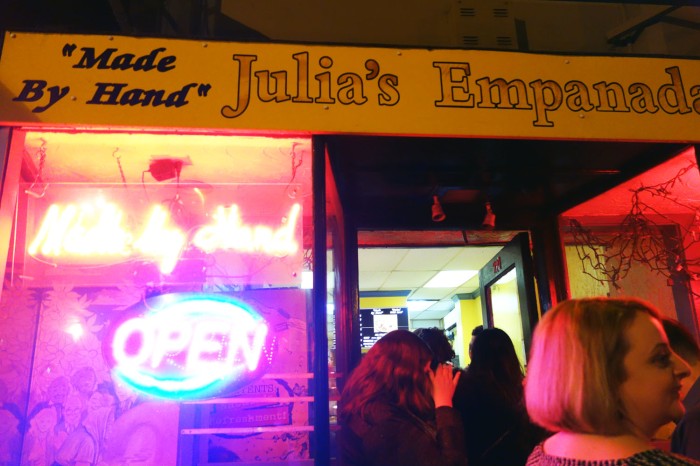 Upon my recommendation (and also because she’s a fellow gastronome who seems to always recognize what’s good on any given menu), my friend picked the Jamaican Style Empanada, which came with ground beef (with the occasional chopped chunk in there too), melty soft onion, cubes of potato and plenty of flavor from curry and Jamaican spices (maybe nutmeg, definitely all-spice). The thing should technically be called a “pattie” (Jamaicans speak English…) but whatever…it’s an empanada. The pocket was buttery soft and smooth, grilled to the perfect flaky texture. When bitten into, the soft, mushy filling filled the mouth instantly, coating the tongue with flavor. The curry definitely gave a harsh kick to it, waking us up from the inebriated daze we were previously in and guaranteeing a much milder hangover the next morning than what we would have had to deal with were it not for our stop-by at Julia’s. The flavors actually become a bit too overwhelming for some and it seems difficult to eat the entire thing, both because of this intensity in flavor and because of it’s size. On both of my Julia’s visits, I’ve been with someone who ordered it and ended up giving me half, a gift I gladly accept each time. Absolutely delicious and probably your best bet if you want a flavor to sweep that cheap rum musk clean off your palate.

I’m not really sure whether it was my other friend or I that got the Chorizo Empanada, but I definitely recall eating half of it. A starchy, thick, warm and pasty filling of creamy black beans and the rice soaking up their fluid, with bits of the Spanish sausage mixed in, popping out here and there in texture, but adding its great salty, smokey flavor to the rest of the ingredients consistently. Definitely more mild in flavor than the Jamaican and the dough is a softer, leading to what is overall a soft baked pillow of mushy, starchy pork, rice and beans. Maybe a bit too boring for lunch but definitely hits the spot with its comforting texture when all you really want is a pillow to crash on.

And finally, my favorite, the Salteña, the Bolivian version of an empanada, made with juicy shreds of white meat chicken, chunks of potato, plump green peas, chopped onion, smashed up bits of hard boiled egg, green olives and what I think were golden raisins. I enjoyed this version because it reminded me of the empanadas I had while studying abroad in Santiago, Chile. There would always be that (what I then thought awkward) hard boiled egg to pack some extra protein into an already pretty meaty empanada. The dough was shaped into a pretty little oval with the crispy, perfectly baked braided spine running across the top like frills on a dinosaur tail. It’s the perfect place to pinch the thing with two pairs of fingers and pull it apart to reveal the steamy hot filling inside. The flavor of the later is great, somewhere between the Jamaican and Chorizo in intensity. The very moist bits of chicken are submerged in a yellowish sauce-broth made from the sautéing and cooking of the veggies, kind of like chicken pot pie or chicken stew in empanada form. The potatoes and egg make it very hardy and filling. The peas add a nice crunchy burst and the raisins take something that is predominantly salty (and tangy from the olive bits) and adds a hint of sweetness to help achieve an impressive complexity of flavor, made even more impressive by the price. 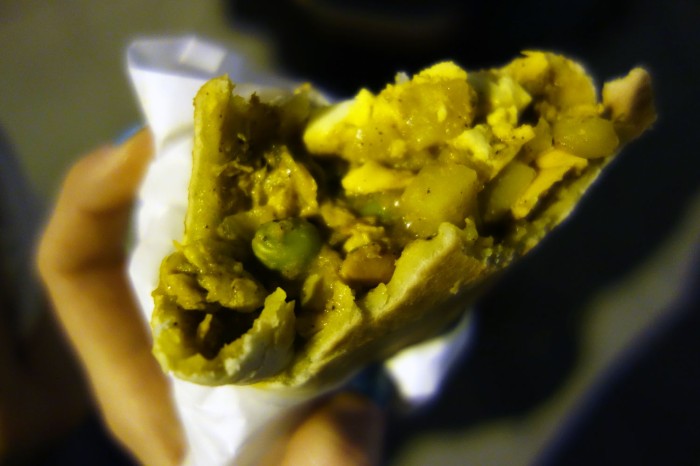 No matter where on the scale of bland to flavorful you want your last bite of the night to fall, Julia’s got an empanada for you, guaranteed to satisfy your need with a warm, flaky pocket of some deliciously mushy, chunky filling to get your jaw moving and bring your feet back down to the ground.