Osteria dell’Orsa is a gem, a cozy, laid back joint in Bologna’s university district, best known for serving up plate upon plate of the region’s best known dish, tagliatelle al ragù. An expat friend of mine took us there for lunch, as the bae and I were both enthusiastic about trying authentic spaghetti Bolognese (a sentiment I had made pretty clear with the dozens of spaghetti Bolognese emojis I had bombarded our whatsapp chat with just a week before). “We’ll have some, but it’s not spaghetti. It’s tagliatelle. And it’s not ‘bolognese,’ it’s al ragù.”

Got it. “Spaghetti bolognese” or “spaghetti with meat sauce” is a variation on the Bolognese dish that is very popular in the U.S. but totally unrecognized, shunned even, by Italians. My friend told me it’s a dish that children eat, an Italian kid’s meal item. Spaghetti is just not the right type of pasta to use in this dish, as the smooth, curved edges of spaghetti do not manage to grab the hearty meat sauce as firmly as the thick, rough strands of tagliatelle do. They’re also just too fine to stand up in texture to a rich meat sauce. Spaghetti is prepared alla carbonara (with a creamy sauce of egg and oil, pork fat, guanciale or pancetta), with oil and garlic, or with just tomato and basil instead. The actual Bolognese dish is locally called tagliatelle al ragù or just tagliatelle.

I also learned that the official recipe for classic Bolognese ragù is kept safely guarded at the Bologna Chamber of Commerce. They take it pretty seriously.

At Osteria dell’Orsa a plate of it will run you just 6 euros, making this homey eatery an especially popular watering hole among students of the city. Looking around you see tagliatelle on almost every table and the chef scooping large mounds of it from a big bowl in the kitchen. It’s clearly the most popular item on the menu, although they also offer some crostinis and a seasonal gnocchi. We ordered three plates of tagliatelle and pints of beer. 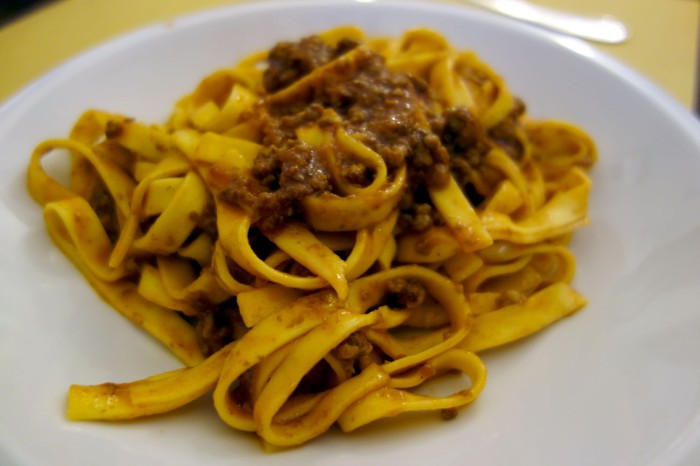 If pasta were like this everywhere I would order it more often. I’d look past the carb count and allow it to appease my hunger as it is meant to do. The ribbons were thick, uneven, clearly homemade. They folded in irregular angles, trapping clumps of juicy meat, while the savory sauce clung to and soaked into their flat edges. My friend explained that the bright yellow color of the pasta reflects the bright yellow egg yolk lain by chickens that are fed predominantly corn, specifically to produce eggs of this color, available at Italian markets as “eggs good for pasta making.” The tagliatelle was rich and filling, with a fantastically firm bite contrasting against the steamy, moist lumps of meat. The sauce itself was very rich in flavor, the beef braised until tender along with onion, celery and tomato puree.

Our lunch at Osteria dell’Orsa was one of the cheapest of our trip, yet probably one of the most comforting. To enjoy a steamy plate of tagliatelle al ragù in a cozy, relaxed setting there’s no other place like it.