“It’s rare though, bloody. Don’t ask for it cooked well,” warned several people – our airBnB guy Vigan, a restaurant host, a waiter. Bistecca alla Fiorentina never comes well done, and in most Tuscan restaurants they’ll just tell you to order something else rather than taking it “burnt.” If you prefer shoe leather to a juicy cut of local moo, order pasta instead. Neither of us does. We chose a popular trattoria named Da Leo in Lucca to have our Steak Florentine, a dinner which turned out to be one of our favorites meals of the trip.

Da Leo is a family owned restaurant found off the tourist path, on a narrow street near one of the larger piazzas. It’s crowded for sure, but most of that crowd is local even during the high tourist season months of summer. Service is fast, portions are large and the prices are low. The menu consists of traditional Lucchese dishes and some more generally Italian classics, all served up grandma style – hearty and homemade, with no frills. 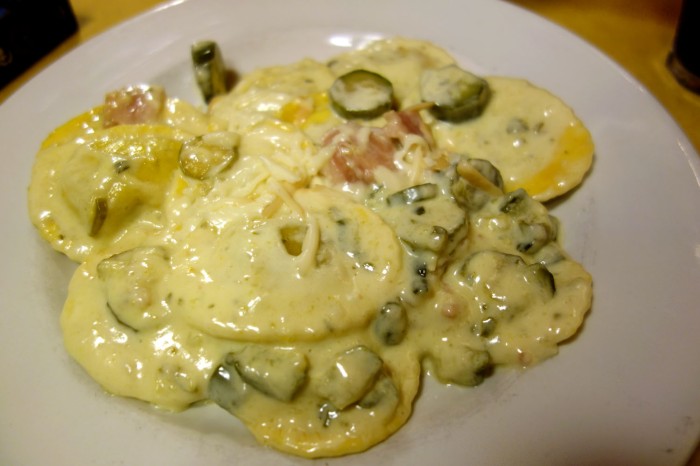 To start, we split a plate of Tortelli All’affumicata, a golden pasta, circular in shape and stuffed with a savory filling of meat with veggies stewed in. The slippery, steamy pockets were mixed up with steamed rounds of zucchini, the mix slathered in melted butter, topped with smoked cheese and tender bits of bacon. Absolutely delicious and a bomb of flavor, a tough act to follow. 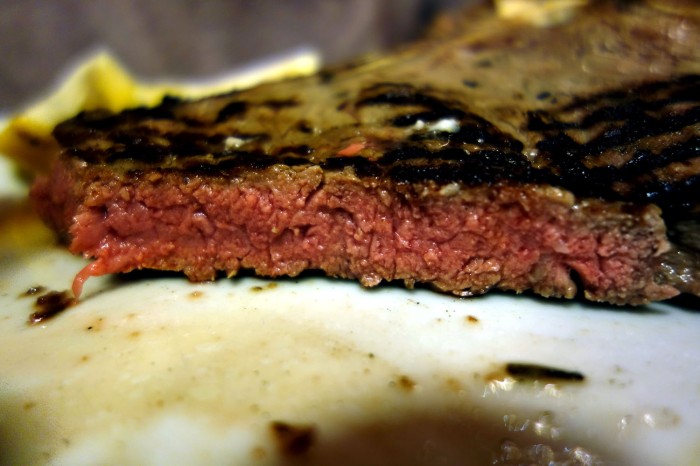 And then came our Porterhouse striped with sexy grill lines, encrusted in rock salt and black pepper, but no other seasoning. Some lemon wedges were served alongside, as is traditional, but we ignored them to taste the wood fire grill fully. Slices taken farthest from the bone were already beautifully bloody, the meat juice locked inside tender fibers of flesh. Closer to the bone the meat was red, bordering on raw, but still tender enough to chew easily. And to wash it down, some of their delicious house red served in a bottle held by a vintage wicker basket, Chianti style.

I had heard quite a bit about Tuscan white beans and ordered it as a side dish for just a few extra euros. The beans were cooked with some onion, garlic, sage and olive oil and were incredibly fragrant and herby. The sage was especially strong, contributing a woodsy, forest flavor to the dish.

Lucca was one of the best surprises of our trip. We really didn’t know what to expect. We hadn’t heard anything good or bad about the city; it just happened to be close to Pisa, which is from where we were flying out the next day, so we decided to stop for a night. Turns out, it’s a beautiful place full of life, with several picturesque piazzas, churches, towers, palaces, shopping streets and restaurant areas. The fully intact Renaissance era walls that surround the city are one of the most impressive in Tuscany and the elliptically shaped Piazza Anfiteatro left us stunned, reaching for our cameras. Our meal at Trattoria Da Leo fit perfectly into our night and played a big role in the fantastic experience we had in this beautiful Italian city.