Near the eastern side of Bologna’s city walls is a charming restaurant called Osteria Broccaindosso with a cheerful, laid back, familiar style welcoming local folks seven nights a week. My expat buddy and his girlfriend took us there for dinner, a selection of pastas typical of the region and a fresh bottle of Lambrusco that went down super smooth on a warm summer evening.

The menu highlights their homemade pastas, with a tasting option of 2 or 3 types for a minimum of 2 people. They also offer several meat dishes, including a beef carpaccio, tenderloin, the ubiquitous steak Florentine and a veal cutlet with ham and cheese, though judging by the tables we passed as we walked to our spot in the back, it really is all about the pastas in this cozy Italian tavern. I plead total ignorance when it comes to the latter, and this place was perfect for me to learn by trying a few of the classics. 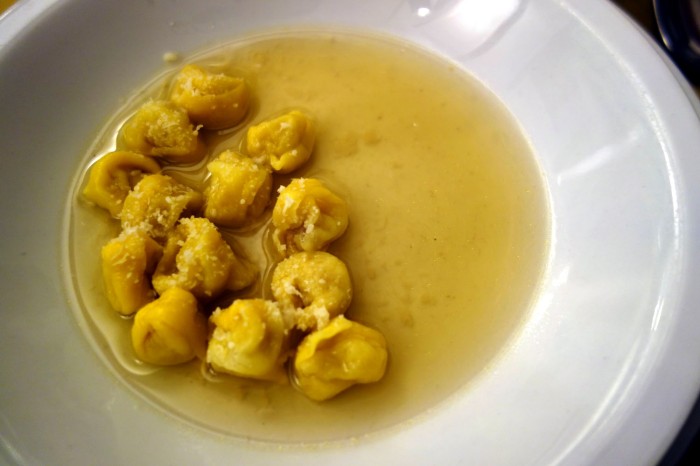 The large bowl of tortellini al brodo was plenty for us to share. This is a classic Bolognese Christmas dish, pretty little pockets of pork submerged in a golden capon broth, made with a neutered rooster (widely believed to provide a fuller flavor). The broth did indeed have a tremendously rich, comforting taste, which brought me back to summertime lunches of chicken soup at my grandmother’s house years ago. I was also very impressed by the petite tortellini, the folding of which clearly requires special dexterity and practice. The pasta was pleasantly thin, allowing the savory pork, prosciutto and mortadella stuffing to dominate in flavor. My friend reminded me to sprinkle a generous amount of Parmigiano over the top to complement the Parmigiano in the filling. Yes, please!

Another beautiful classic was the tortellini stuffed with ricotta and served with melted butter and sage. These pockets were larger and a bit thicker, stuffed with a creamy filling of ricotta and Parmesan. The melted butter, carrying with it the fragrant sage, soaked through the steamy skin of the pasta and got trapped in its grooves and creases. Each bite was rich, moist, creamy and satisfying, ruining store bought, frozen tortellini for me for a lifetime. 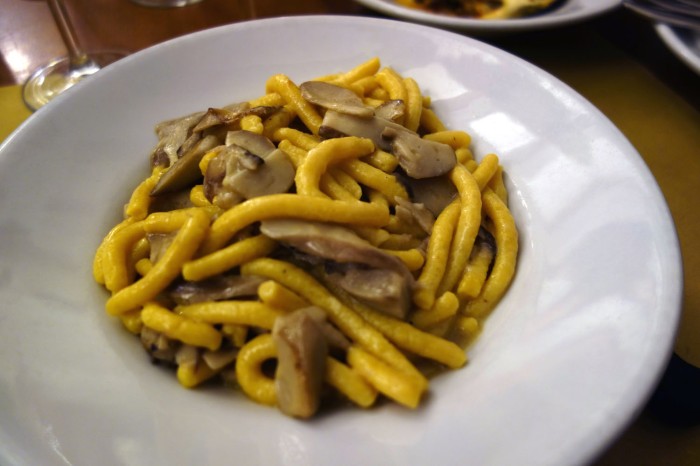 Porcini season came early this year and Osteria Broccaindosso celebrated its arrival with a short porcini-themed menu, from which we chose the passatelli with porcini. This worm-shaped pasta is made with bread crumbs, eggs and Parmesan cheese, and is typically served in a rich broth or with robustly flavored truffles. It’s a classic poor-people food invented to replace flour with cheaper day-old bread and now beloved by the people of Emilia Romagna. The pasta had a wonderfully hearty, crumbly texture, which went very nicely with the juicy slivers of mushroom. The nutty taste of fresh Parmesan and the woodsy, pungent funk of the porcini made for a lovely combination.

I hardly ever order lasagna at restaurants and that’s because I’ve had a few too many dense, messy, greasy chunks of over- or undercooked sheet pasta overwhelmed by runny mozz and flavorless heaps of “Bolognese sauce.” I was therefore hesitant when my friend ordered one for us to try. Out of the few lasagnas I’ve had in my life, the one at Osteria Broccaindosso turned out to be the best. The sheets of green spinach pasta were perfectly cooked, slipping and sliding against the creamy bechamel and crumbly ragù. They were also super thin, so that layering them did not result in a heavy block but a perfectly light, airy dish. Over the top was a smooth layer of gooey mozzarella lightly toasted and crunchy on the surface for a fantastic textural contrast that did not overpower the tender layers of pasta and meat underneath.

And then dessert, which Osteria Broccaindosso is especially known for. We had a plate of gooey, freshly baked chocolate brownies. But the highlight of the evening was what came on the side, a fluffy pile of fresh mascarpone cheese, which we spooned up like ice cream. The texture was wonderfully smooth and luxurious, with a delicate sweetness and slight acidity. I actually ended up eating the cheese on its own, licking it off my spoon layer by layer, instead of spreading it onto the brownie as it was meant to be eaten. A delicious ending to a great dinner with friends.