After our garlicky meal at Temple Street Spicy Crabs last weekend my friends and I were in the mood for something sweet. Specifically, we were searching for the soft tofu with ginger syrup that we had in Sai Wan during our camping trip there. What we found, instead, was this place. The colorful photos of desserts I’ve never seen or heard of before, the low prices and the fact that the menu was also in English (didn’t want to risk ordering tripe sorbet…) lured us in. And from the time we sat down, it was a culinary adventure. 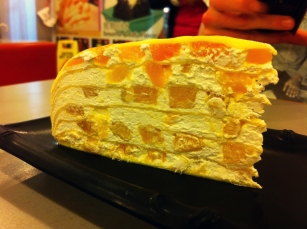 This was the first thing we ordered and the one I enjoyed the least, something called a Mango Jenga. It was basically a cake made out of multiple thin sheets of glutinous rice “dough” (a bit like the exterior of a mochi ice cream) separated with a thick, sticky whipped cream in between, and dotted with cubes of mango that hovered, suspended in the thick cream filling. The cream was a bit too sticky and glossy from egg white and just too sweet in general. Maybe if the fruit inside was a bit more tart and could offset this sweetness, it would’ve been slightly better, but the overripe mango did not curb the sweetness at all, just added to it. I would recommend skipping this one.

Next up, something much better, Sago Sweet Soup with Grass Jelly, Aloe Vera, Basil Seeds, Glutinous Rice Balls and Fruit. Sago pudding- a bit like tapioca, except with smaller little chewy beads – sweetened with coconut milk, creamy white and delicious. Submerged in the stuff were cubes of jiggly, flavorless black grass jelly and aloe vera. A heap of fresh honeydew melon, watermelon and peach piled on top, along with chewy little multicolored balls of glutinous rice ans some funky little basil seeds, which gave a slippery smooth texture of caviar to each bite. Still a weird overall combo of textures for me but not bad at all.

Something wonderfully comforting and definitely one I’d recommend to anyone visiting this place or Yau Ma Tei in general, Black Sesame Dumpling in Ginger Syrup. A wonderful, pillow-soft, slightly chewy dumpling filled with nutty, toasty and sweet black sesame paste. The dumpling burst in the mouth and the thick sesame filling oozed out, coating my tongue in its roasted nut essence and starchy dense texture. The latter was offset wonderfully by the fresh, zingy, floral ginger syrup the dumplings were served in. The liquid was sweet, but not too sweet, slightly sticky but still very clean and light, hot and comforting. The ideal is a one big funky spoonful (see photo) with a dumpling and plenty of the ginger syrup – a bit of everything in the same mouthful. Absolutely delicious. 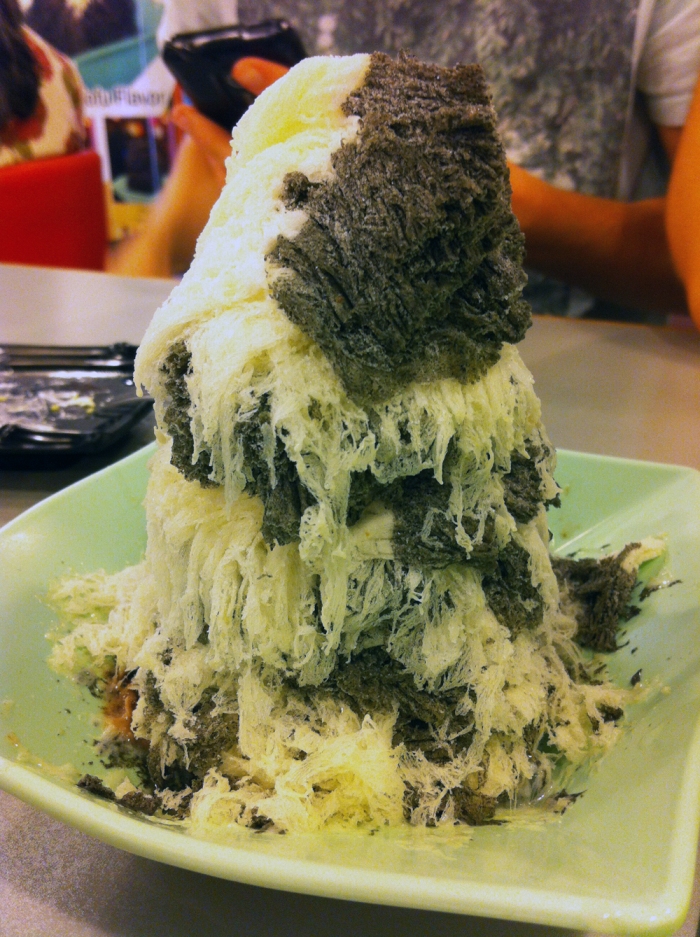 And finally, the show-stopper, Black Sesame and Tofu Snowflake Ice. A beautiful, tall architectural masterpiece of melt-in-the-mouth, very light and airy shaved ice. The texture was unlike other shaved ice desserts I’ve had before in that it was not hard or crunchy in the least, but incredibly soft and gentle on the tongue, disappearing onto it in seconds, leaving only its flavor behind. It was also not too syrupy or sticky as most shaved ice creations tend to be. The white stuff is tofu-flavored (in other words, mostly just sweet and creamy) shaved frozen soy milk. The black side was sesame, PACKED with flavor, nutty, roasty-toasty, comforting. The simplicity of the tofu lightened up the thick flavors of the sesame and the two combined make for a beautiful black-and-white tower of fluffy snow. Despite it technically being iced cream, it left me feeling light as a feather and very satisfied by the flavors and textures dancing around on my palate.

It was nice to experience the nutty flavors of black sesame (warm, thick, sticky dumpling filling and icy cool, shredded frozen cream) in two very different ways at the same restaurant. The experience really opened my eyes to the versatility of the ingredient.