Last week I was fortunate enough to sit through a 6 course tasting of the debut a la carte menu of Spasso‘s new Executive Chef, Antonio Totaro. What a resume this guy has! Having started out at Don Alfonso – 1890, the highest Michelin-rated restaurant in Southern Italy, his background is in traditional Italian, and his specialty is blending classic Mediterranean flavors with his own innovative and modern approach to cuisine. He has proven his versatility by working as private chef for a diverse range of international celebrities such as Danny DeVito, Mike Tyson, Cindy Crawford and Monica Bellucci, as well as billionaires in the Maldives, Monte Carlo and Geneva. Focused and serious in the kitchen, Chef Totaro is also personally just a cool, modest guy. Stop him for a few minutes between courses to ask what the diets of Mike Tyson and Monica Bellucci had in common, or about the politicians and actors he met during his years working on the Christina O, and he will be happy to share some interesting stories. 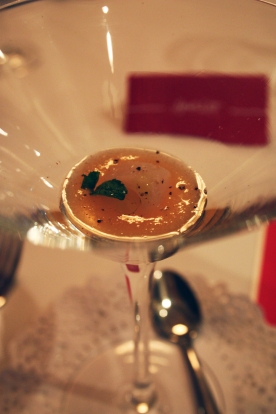 The meal started out with some house-made bread and Grissini. Among the breads there was a white, a wheat and something focaccia-like. Soft and airy to soak up the condiments with, although maybe a bit too crust-less for me. The Grissini sticks were wonderfully crisp with a strong green olive oil punch to them in flavor but not too oily in texture. Sprinkled with a bit of coarse salt. The bread was served with a very light tomato salsa, some vibrant green basil pesto and a bit of olive oil with aged, thick balsamic.

The amuse bouche in this case was a wonderfully slippery and angelically soft Hokkaido scallop slice, curled up in a little pool of melon puree, drizzled with olive oil and sprinkled with freshly ground black pepper. It was an interesting combination of flavors that worked out well. The savory, green, floral taste of the olive oil and the sensible, robust heat from the black pepper were the first flavors experienced, but the subtle, very slight sweetness of the melon peeked in towards swallowing and left a fresh aftertaste, which the slippery angel-flesh scallop could still shine through.

Carpaccio of Australian red snapper with a very light lemon sauce and strawberry puree. The thin slivers of fish melted in the mouth nicely and went very well with the sweet, slightly acidic strawberry puree. Not very exiting, but a nice way to clean the palate with cool, fresh flavors before the heartier courses still to come.

The second of the duo was a tuna which stole the show on this plate. The fish was seared 1:9 on the outside and was quite stunning in color, although a tiny bit dry for me and not as juicy, thick and fatty as I was expecting. The presentation and combination of flavors around the tuna made up for this though. A tiny bit of shaved ginger on top and some roasted, julienned beetroot below. The earthen, soil-acquainted minerality of the beetroot balanced very nicely with the zingy, fresh, floral zest of the ginger. For a bit of extra freshness, vibrant color and complexity of texture some stunningly green pea puree was also added to the dish, one which gave the bite of fish a bit of extra moisture as well as smooth, velvet softness. 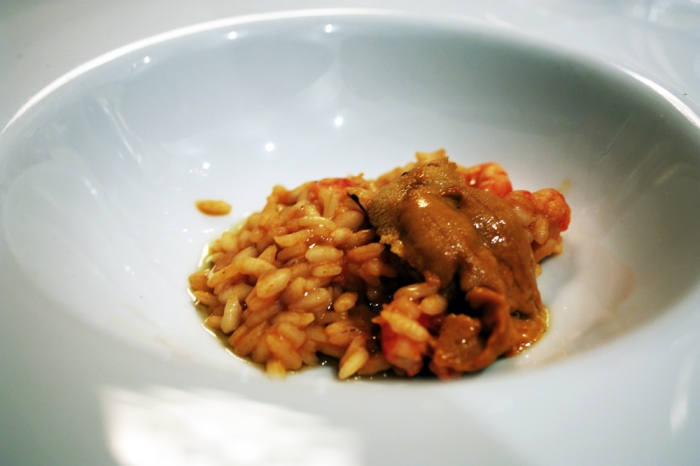 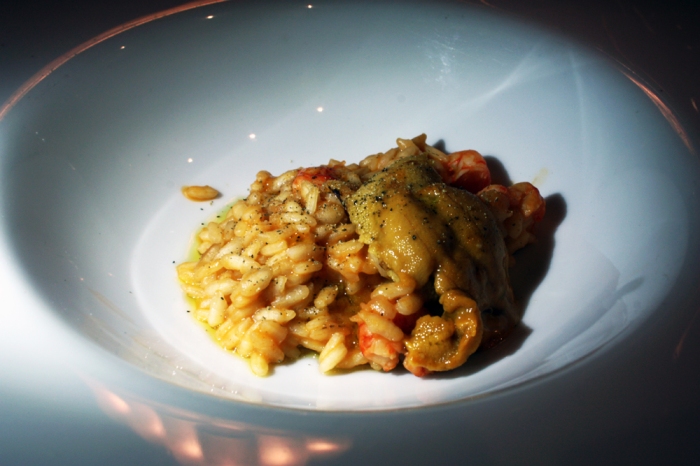 This next one was a show-stopper. As it was served, silence filled the room full of foodies. An unabashedly fat little pillow of uni on a bed of Carnaroli risotto with Sicilian Red Prawns peeping out of it. This item was under a section of the tasting menu entitled “Secret Touches,” along with the previous dish, in which, I think, the beetroot or the strawberry were the spoken-of touches. In this one, it was way more obvious. The star urchin was served with sticky, sweet shreds of caramelized orange peel which clung to the puffy, soft echinoderm, adding a bittersweet citric vibrance to the murky marine brine of the urchin roe. The orange peel was notably placed just around the urchin, as it was meant to really communicate only with this element of the dish and not with the risotto, with which it would have been a bit too sweet. The balance was just right and the flavor combination was one I’ve never heard of before, truly imaginative and bold. The risotto wasn’t bad either, although it reminded me more of a paella. It wasn’t as creamy and moist as other versions I’ve had, but if it had been, it would’ve probably been too close to the texture of the urchin and it would’ve competed too much. The Carnaroli rice grains were large, hardy and cooked al dente, just like the tender little baby prawns which added an extra pang of seafood to the dish.

The first three of these dishes were served with a Ferrari Brut Spumante, a 100% Chardonnay from Trento which had a beautiful straw blonde hue, very intense little bubbles which did not flatten out throughout the three courses, and an almost creamy texture at the finish. Ripe apples and peaches, with a very nice balance. This versatile little bubbly stood well on its own as an aperitif but also went beautifully with the amuse bouche, the fish duo and the urchin risotto.

Italian simplicity. Red, white and green. Tomato, mozzarella, basil. This was the Chef’s Tortello of Stracciatella di Bufala with a bit of cherry tomato and it’s sauce, as well as vibrant green basil pesto stretched across the plate. The cheese both inside and out was gooey and soft, nicely melted and creamy. The tomato sauce was very light in flavor, which was nice, but maybe a tad too watery. The pesto was zingy and fresh. My only big problem with this dish was that the pasta itself was a bit too dry and firm, especially where the tortello was folded over and closed shut. It made the thing a bit difficult to cut into and to chew and this took attention off the softness of the burrata, which is always the key element of a dish when burrata is involved. But the flavors were just right.

This was paired with the 2011 Castello Banfi Fontanelle Chardonnay, another 100% Chardonnay but this one a bit more intense and rich, round in its acidity with peach and apricot flavors and a very light vanilla spice on the nose. A bold decision to pair a simple dish with such a charismatic wine, but it worked out in the end, as the ripe white fruit added a necessary robust freshness to the dish.

Red snapper with potato foam, baby spinach, cocoa powder and baked cherry tomatoes. This one wasn’t my favorite, although I did enjoy some parts of the dish. The fish itself was really nice, very fresh with the perfect amount of fat on the filet and a nice crunchy sear on the outside. However, it was overcooked to the point that it was more similar in texture to a chicken breast or a pork loin, and the flakes were chewy. The Chef mentioned something about slow cooking it. Maybe this preparation method should be reserved for less delicate protein. I did, however, enjoy the steamed spinach because it had a texture that I personally can’t get enough of – moist, delicate, juicy – with a vibrant color and natural leafy green flavor. The potato foam at the base of the fish was also very nice. It was light and airy, sooth and soft. I did not, however, taste any of the cocoa powder that was apparently used in the making of the foam or sprinkled over the top. While the dish was texturally interesting (wilted, juicy spinach, airy and moist foam, hardy, thick fish), I thought the ingredients lacked a bit of flavor. The dish lacked one more ingredient with an “oomph” to it, a powerful flavor or, specifically, acidity. A citric sauce, some garlic in the wilted spinach, an herb crust on the fish or maybe some sort of pickled element would have been a nice addition and would have pulled the existant ingredients together a bit.

I guess in this case the pairing, the same 2011 Castello Banfi Fontanelle Chardonnay, was a good idea as it added a little something powerful and fruity to the dish, almost acting in this case like a sauce. 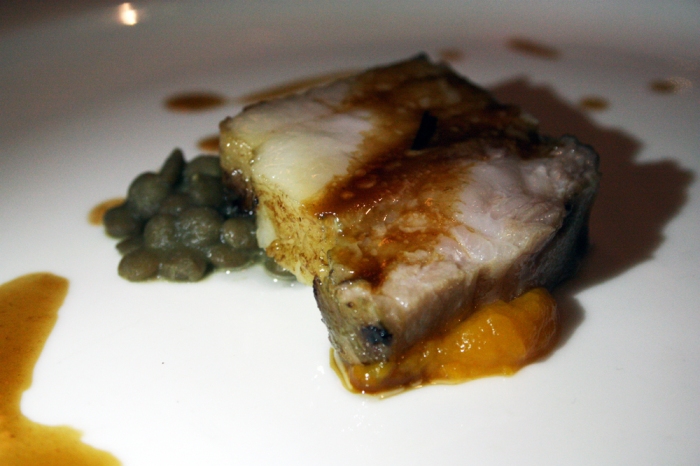 A 48 hour slow-cooked Berkshire Kurobuta pork belly with sauteed Castelluccio lentils, pumpkin puree and Marsala wine sauce. A clever take on a classic grandma dish, which left most, if not all, of the people in the room satisfied. The fat of a relaxed, happy, acorn-eating, black Berkshire pig. Crisp, heavenly, melt-in-the-mouth-and-make-that-mouth-smile piggy fat, laced with the essence of the animal itself. The small portion of the cut that was flesh was pink and tender, juicy and moist, sweet and clean tasting in a way that pork rarely is. A salty, aged and deep-flavored Marsala sauce was drizzled over the top, seeping into the pork and adding a bit of moisture, as well as an extra layer of flavor. The pork was lain over a mound of sauteed lentils which were earthy, soft and comforting. The skin of the lentils was also very thin and less fibrous compared to those of other lentils I’ve had, which made them less rough to chew and more delicate all around. The moist pumpkin puree added a sweet autumnal element and a lightness to the dish, lifting up both the pork belly and the thick lentils.

This was paired with a 2009 Gaja by Promis Ca Marcanda IGT, a beautiful Super Tuscan blend of Merlot, Syrah and Sangiovese. Red fruit jam on the nose with a very strong taste of cherries, a slight earthy minerality and some warm, autumn spice. It was an interesting and complex wine that went beautifully with the belly, adding just enough but not taking away a thing. 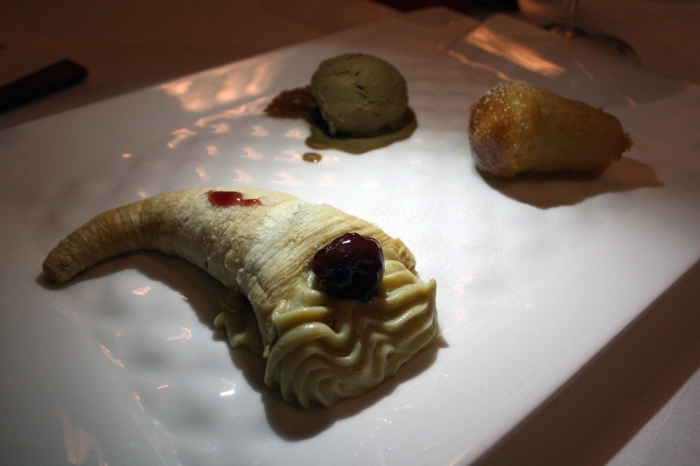 And finally, my (so far) favorite dessert spread in Hong Kong. It’s apparently also Monica Belluci’s fave. The best part of the dish, and the one to start with here, a lobster tail shaped Sfogliatelle pastry stuffed with a heavenly, thick cream flavored with cinnamon, and a sour cherry filling in the tip of the horn. The cream was dense and velvety smooth, and the cinnamon gave it a cooling affect which made it stand out against the warmth of the sour cherry filling in the horn. The pastry itself was incredibly flaky, crisp and delicious. It did not become too soggy from the filling and maintained its texture, which I appreciated. Next was a Rum Baba – a moist, yeasty and very rich cake soaked completely through with sweetened rum. Sticky on the outside, a wonderfully soft rum sponge. The cake itself could have been a tad firmer, with a bit more bite to it, but I did enjoy pushing the stuff with my tongue against the roof of my mouth and feeling all that sweet rum gush out and flood my mouth. And lastly, a scoop of 26 espresso coffee ice cream, rich, bitter and dark, with the strength of 26 espressos. The thing woke me up instantly and gave the meal a fantastically sensible closure. The intense coffee flavor also went well with the rum in the Baba, which I ate just before it.

Paired with a La Spinetta Moscato D’asti from Bricco Quaglia. Not too sweet, with peach and honey on the nose and a bit of pear and banana as well on the palate. A bit of freshness, but still letting the dessert plate shine. I also very much appreciated that a sparkling sweet wine was picked over a still, since the bubbles lifted me up and left a nice lightness on my palate, even after 6 courses.