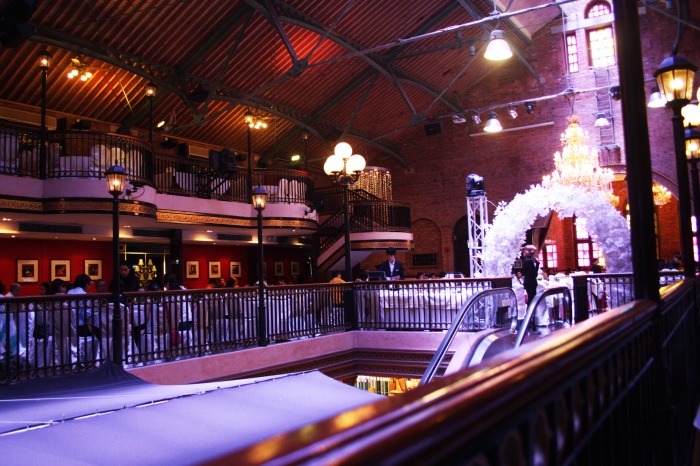 When my dad got to Hong Kong and asked me about dim sum places I’d visited and could recommend, with the underlying goal to convince me that HIS favorite is actually the best one, I had a big confession to make to him – that I’d never really had dim sum. I mean, I’ve had various steamed and fried dumplings and shumai and all that but it was never the real deal. Pork dumplings were always under-salted and greasy little things to be drenched in soy sauce and picked out of an East Boston Pan-Asian restaurant’s takeout container (with cheap, splintery chopsticks, might I add), and steamed buns always just seemed way too filling and bloating to get excited about. They were always alongside a container of General Gaos, or – worse – part of a Pu Pu Platter. Sometimes, like the occasional Taco Bell Chalupa or Subway Chicken and Bacon Footlong, they hit the spot. But, although I always suspected there was a long history and a rich culture behind dim sum that I was missing out on, I never really took it seriously. My parents always did. They’d try to get me to go with them to some of the more authentic Chinese places in Boston on Sundays but somehow something always came up. Usually I just declined and made up an excuse because I thought that no meal could be called a brunch if there was no Bloody Mary on the table. Boy was I wrong to do so. 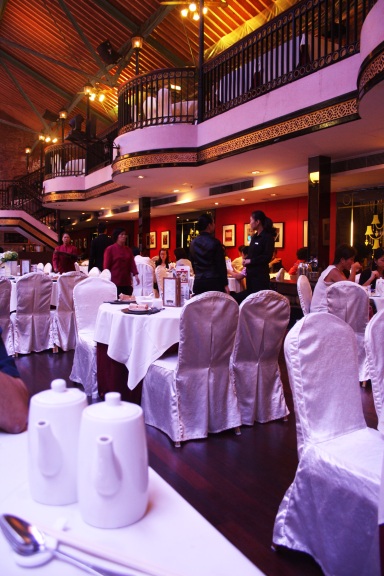 In the months that I’ve lived in Hong Kong, before my dad got here, I had heard a bit more about this pretty specific Chinese meal. I had heard that there is really good dim sum (including a surprisingly inexpensive 1-Michelin called Tim Ho Wan) and really bad dim sum (711 microwaveable shrimp shumai). I’ve seen it consumed in skewer form at street food stands (meatballs, fishballs). I’ve seen a pathetically limited offering of dim sum on many Western restaurant menus, for the not-so-out-of-the-box Westerner who orders it to look out-of-the-box, usually for dinner. But it wasn’t until our visit to The Grand Stage that I really understood what it was. First of all, the whole thing revolves around tea and the very specific etiquette associated with tea service in China. Mixing tea with hot water to prevent it from getting too dense, refilling others’ bowls before you refill yours, bowing to accept – all these things that I’m sadly pretty ignorant to still. Dim sum seems like it was originally thought up to be tea-time snacks instead of a brunch but later morphed into the later. Second, it is founded on the concept of sharing. Three or four pieces of stuff on each plate, meant to be split in as many ways as there are people at the table. On Sundays, ready-to-serve dim sum in steamer baskets and small plates are carted around the tables and guests can kind of pick out what they want, a sort of “buffet” without that fat-American stigma behind the word. Third, there is a pretty big variety of traditional dim sum items and they’re each kind of like characters in a play, all very different in their personalities but joined together by a shared story. Fourth, buns are NOT the dense, doughy, filling bombs I thought they were – this one I should’ve known because my mom loves the stuff and she’s both a shameless gourmande and a very light eater. To show me all of these things, my dad took me to The Grand Stage on the top floor of Western Market, a very elegant banquet hall type restaurant with ribboned bouquet chairs and beautiful white tablecloth. 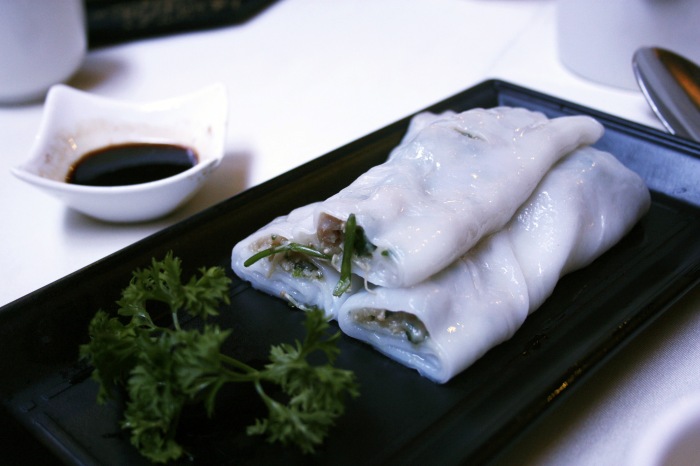 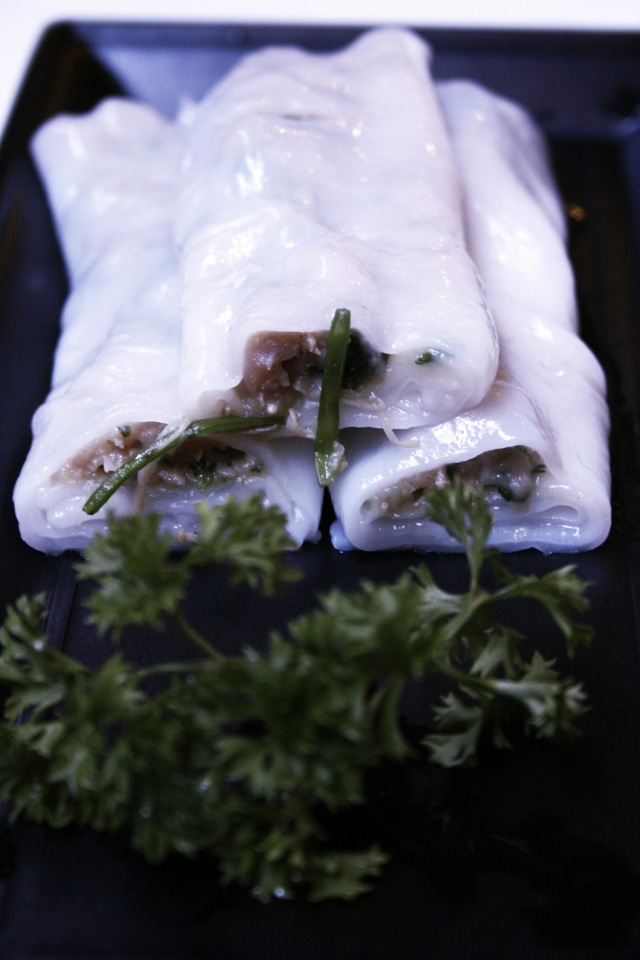 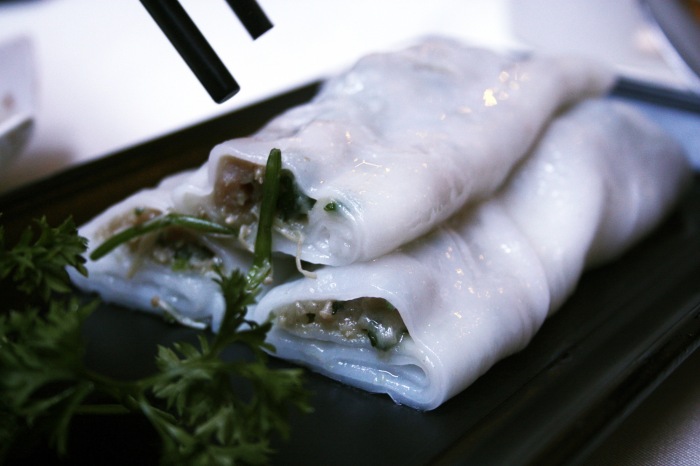 Steamed Rice Rolls with Minced Beef and Coriander. According to my dad this one traditionally comes at the end of the meal when everyone is already too full and is thus never fully appreciated. If this is really the case, although I have a hard time believing I wouldn’t appreciate it even after a 6 course sit-down meal, I’m glad it came first. A wide sheet of shahe fen rice noodle made of rice flour and tapioca, white and glossy from the former and elastic from the latter. No particularly exciting flavor on its own, as it kind of just tastes like starchy white rice, but the texture is wonderfully slippery, shiny, moist and soft, while still being elastic enough not to break up. The flavor comes from what’s inside of the noodle – soft and moist minced beef flavored with plenty of coriander which gives it a wonderfully earthiness. 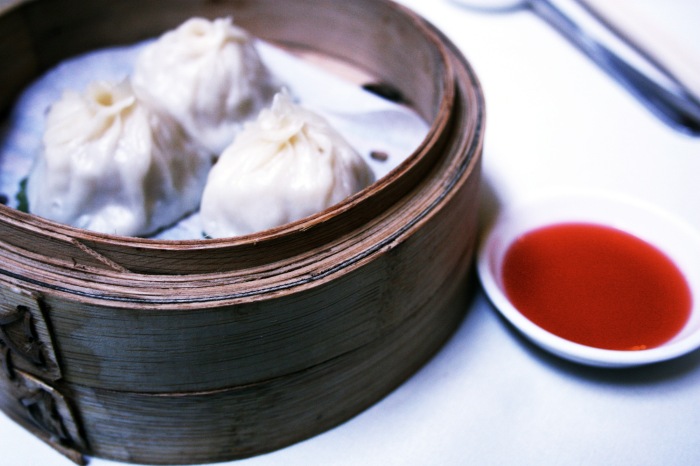 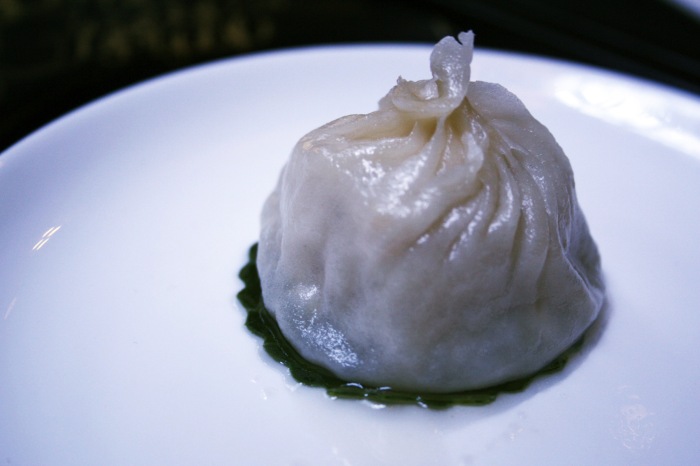 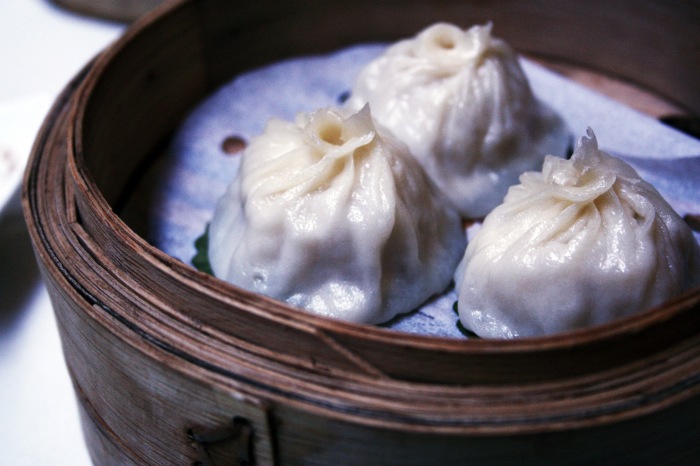 Steamed Shanghai Dumplings (Xiaolongbao) w/ Fresh Crab Meat. Wonderful little flour wrappers enclosing a very soft and fresh ball of slightly sweet crab inside, along with a bit of very deeply flavored meat broth which squirts out when bitten into and which makes it incredibly difficult to grab these things and lift them off the wax paper, for fear of breaking the casing and spilling the liquid soup inside. We managed two out of four. The soup, it turns out, ends up inside of the dumpling not through some sort of clever trick of injection but in a much cleverer way – a jellied, solid aspic of meat broth is packed into the dumpling along with the crab meat and, when steamed, the aspic melts into its liquid soup form, providing a wonderful little explosion each time one of these dumplings is bitten into. The dumplings were served with a very slightly tangy and slightly sweet red rice vinegar which cut the crabmeat nicely but was subtle enough not to compete with the flavors of the soup filling. 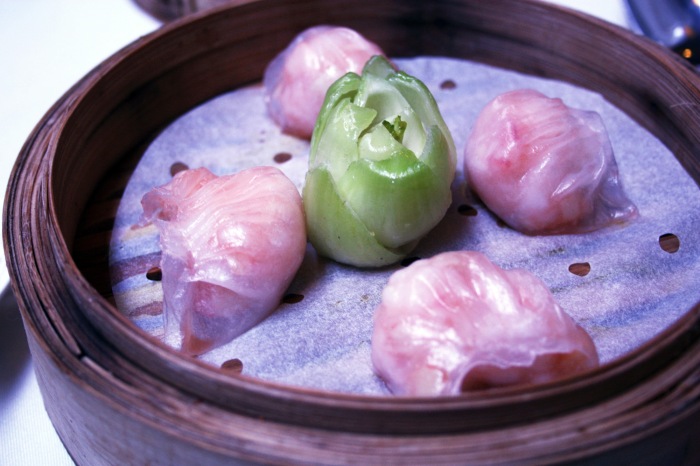 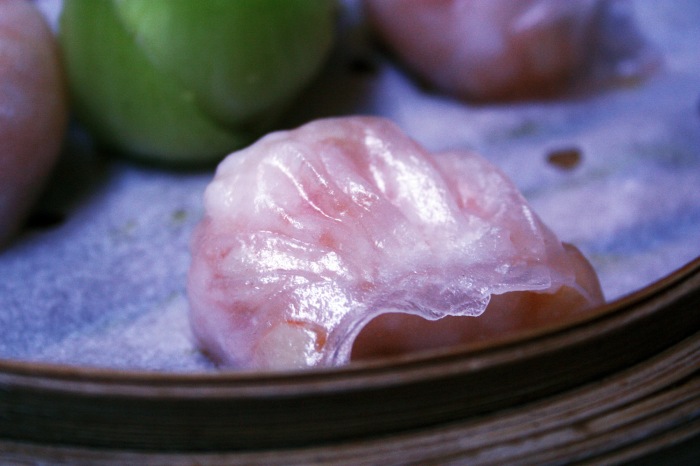 Steamed Tiger Prawn Dumpling with Bamboo Shoot. Har gow. Perhaps the simplest looking one, yet this one is probably one of the most difficult ones to make. A translucent sheet of smooth and sticky wheat starch paper wrapped into a bonnet shape around a curled up whole tiger prawn. The prawn is cooked PERFECTLY and blanched at the perfect cooking point so that it stays remarkably crispy and pink, which is what gives this dumpling its characteristic crunch and color, respectively. A bit of pork fat is added to the shrimp to help it plump up and to give a nice, subtle piggy essence and which saves it from being too clean and makes the smooth, slippery wrapper stick better to the filling. The thing is served in 4’s in a steamer with a steamed bamboo shoot in the center. Unfortunately I mistook the thing for a garnish so I didn’t touch it. 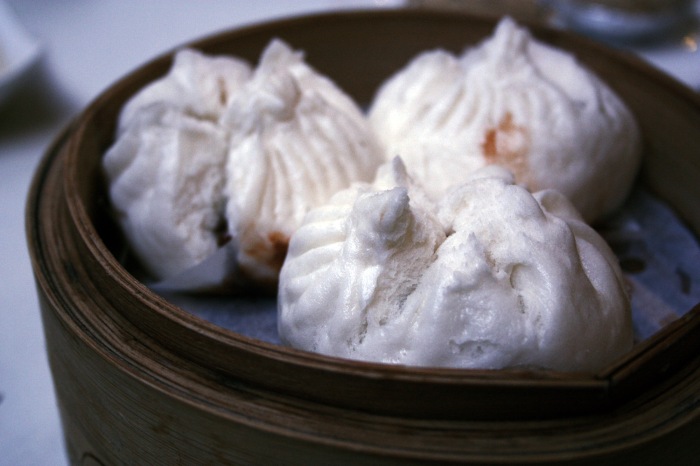 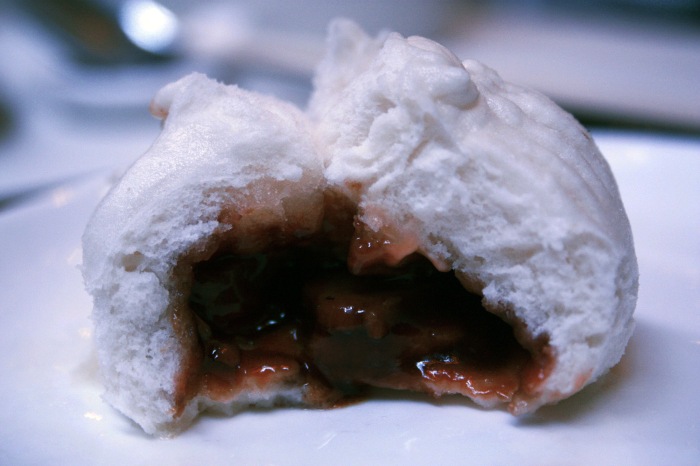 Steamed BBQ Pork Buns. Cha siu bao. This one was my favorite. A super airy and soft steamed bun, much like a very light, puffy bread, only a tiny bit chewy and filling but not heavy. On the inside was a wonderfully moist filling of barbecued cha siu, cubes of slow-roasted pork tenderloin in a syrupy, glossy sauce which tasted like a mixture of soy sauce, hoisin sauce and vinegar with a bit of sugar or honey added to make it sweet. Biting into these little clouds, my mouth was flooded instantly with this warm, slightly sweet and savory sauce and the bits of pork tender enough not to have to chew too long, about the same amount as the soft, pillowy exterior of the bun. 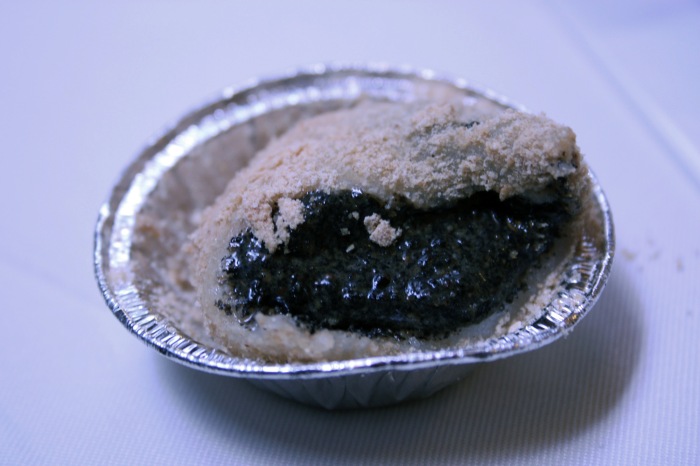 Sweet Sesame Dumplings – And, for dessert, a wonderfully soft, moist, pudding-y and sickly sweet balloon of black sesame filling wrapped in a thin, sticky pocket of glutinous rice, which is then coated by a very fine roasted and ground peanut powder. Deliciously dense, heavy and super smooth. The sesame filling is nutty and sweet and, since it reminds me of Hungarian desserts also filled with sweet black sesame, very comforting for me personally. The peanut powder on the surface is a very clever addition as it echoes the nutty, roasted-nut flavors of the sesame seeds inside.

And after all of this, I felt like a butterfly, light as a feather and energized to start my day. I will make it an effort from now on to do dim sum at least one Sunday morning every couple of weeks, because this is definitely not something to miss out on.