In a city where the search for authentic pho or pad thai is a lost cause, Korean barbecue (the real deal) is actually available and within reach. Carabobo Avenue, located in the southern region of the Flores district, is the primary artery of Buenos Aires’s Barrio Coreano, home to the 20,000 Koreans inhabiting Buenos Aires, and a hub for Korean businesses and organizations, churches, beauty salons, schools and yes, restaurants.

The one some adventurous friends and I chose was an unassuming little hole-in-the-wall named Bo-Sung-Restaurant, a place with a narrow entrance, a slightly off-putting plastic strip door and nothing but a neon sign with 4 Korean characters marking it as a place of serious eats. A bit weary of visiting a neighborhood with not the best reputation (when it comes to safety) after dark, we took a cab and judging by the number of bullet-proof-vested police officers roaming around the area, this was probably a good idea on retrospect. A bit tough to get to, yes, but the food… Well let’s just say it’s worth a visit back really soon.

Long, family style tables line the dining room, three metallic ventilators suspended from the ceiling, hovering over each table. An overwhelming number of tiny little plates and bowls, each filled with colorful sides, surrounding a circular, convex, built-in grill. Sizzling sounds and smoke lured us in and we quickly took a seat among big groups of Korean families and friends who were already happily wolfing down their grilled meat and kimchi, chewing and chattering noisily.

There are no menus here, they offer only one thing: all you can eat Korean barbecue with pork, spicy pork and beef along with all the sides and fixings, AR$80 per person (well worth it when you consider how much you get). We ordered and the waiter set up our grill station, demonstrating the process of cooking each meat by laying down the first of the many heaps we would cook and consume that night. 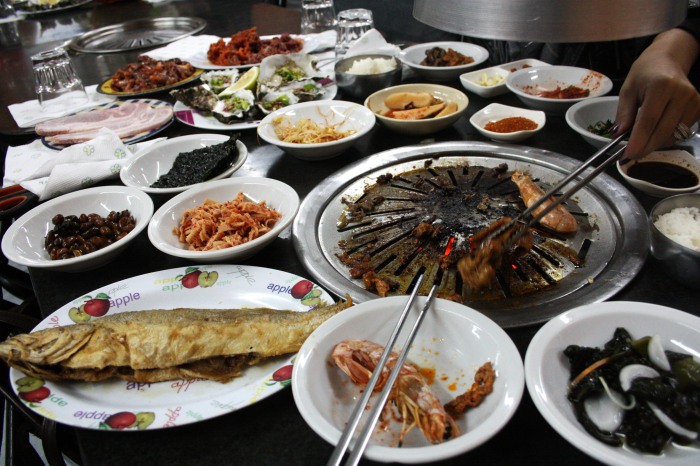 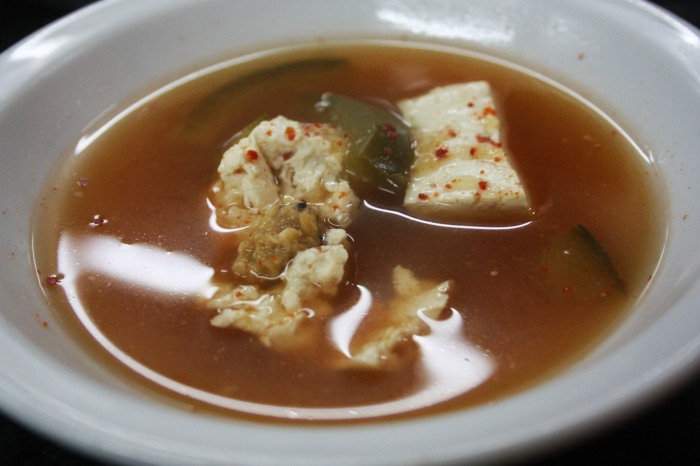 And then, when the meat had been laid down, it started. An onrush of the little plates containing the banchan (side-dishes): kimchi (the pickled, spicy cabbage, so sacred in Korean cuisine), soft and slimy marinated seaweed with onions, brittle dry crispy seaweed, scallion pancakes, wonderfully flavorful steamed pork mini-dumplings with soy sauce, fresh, crisp bean sprouts in vinegar, peanuts saked in soy, crunchy shrimp with the head still on, tender pickled parsnips, chewy strips of tripe with red pepper flakes, a deliciously flaky whole roasted fish (the species of which the waiter could not identify), bowls of sticky rice, very extravagantly seasoned and surprisingly good quality (and huge!!) raw oysters, something called “pancetta” which seemed more like pork loin, octopus tentacles, a steaming bowl of miso soup with soft tofu and a host of spicy sauces and dry herbs to flavor all of it with. And in the middle of it all, tender and perfectly marinated strips of beef, pork and spicy pork sizzling away on the grill.

Our eyes, brains and taste-buds all a bit overstimulated by this shocking variety, our meal turned into a hilarious, mad-rush for little plates, a little bit of this a bit of that, more of this because it goes so well when combined with that, can you past the kimchi, can you pass the dumplings, yes of course would you like the soy sauce to go with it, yes please and the peanuts too, would you like any more beef – I think it’s ready, no thanks but some spicy pork would be nice, would you care for my shrimp – it looks a bit sketchy, yes but only if you promise to try the octopus – it’s actually quite tender. By the end of it we were completely satisfied, unable to move and vowing to each other and to ourselves not eat anything else for the next 2-3 days. A wonderful experience, an opportunity to try a host of new flavors and textures, and a great time out with friends.