Dai pai dong – long, bustling rows of what are traditionally outdoor market food stalls moved indoors – in the case of Tung Po, above a seafood market in what looks like a cross between a factory and an administrative building in North Point, Hong Kong. One giant, chaotic, intensely lit room full of happily chattering, loudly chowing locals and waiters rushing mouthwatering plates to them, shared by multiple business each with their own specialties. One long, amazing menu. Why did I come here? Because of Anthony, because it’s rare to see him 100% satisfied and speechless, because when he came here (scroll to end of post for video) on his trip to Hong Kong he was just that. I dragged my friends out to North Point, to not the safest looking neighborhood which is on the exact opposite corner of the map as our residences and on the escalator on the way up to this dingy looking warehouse building, I kept saying, “This better be good, Tony…” It was. So thanks.

Housed in a municipal building on Java Street in North Point 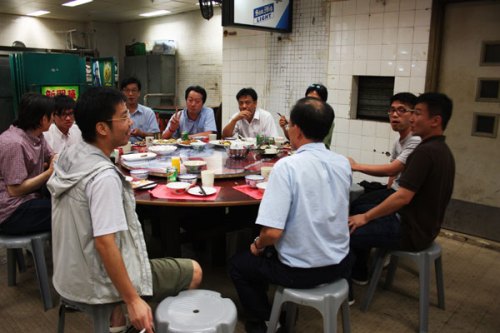 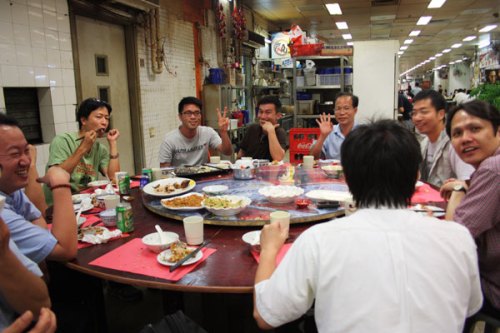 The staff really does wear rubber boots to avoid slipping and spills.
Beer really is served in porcelain tea-cups engrained with calligraphy and drank using both hands. I’m getting to the food, I swear… 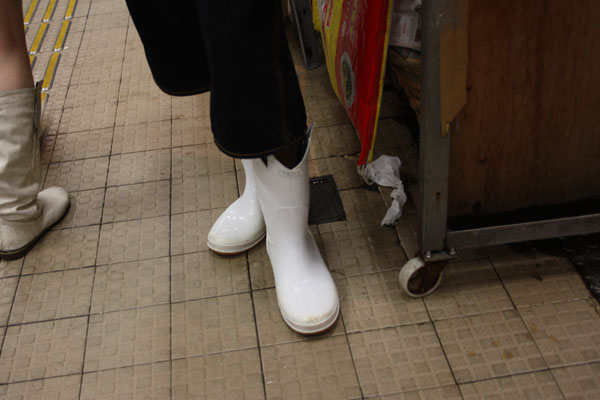 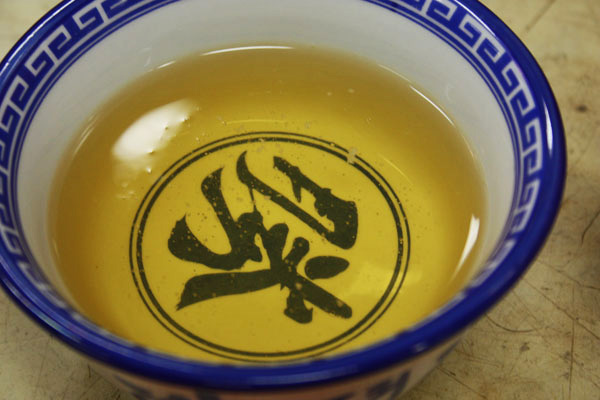 Being in a place like this with so many options which don’t appear on the typical menu even in Hong Kong (if a bit more expensive than the typical local restaurant), we decided to order only those dishes we didn’t think we could get anywhere else. Sure the fried mantis shrimp, the list of wonderful congees, the sweet and sour pork and chicken looked good, but we were going for the house specialties, the weird and amazing. For #1, we went for one which stopped him in his tracks – squid balls in their own black ink on spaghetti. Creamy, jet black, super-staining (our teeth looked like those of pirates after this one) ink carrying a deep murky-sweet marine essence covering completely the PERFECTLY cooked, fall-apart tender, not at all chewy balls of squid flesh sitting on a portion of thing spaghetti which was mainly there to soak up the ink and give a neutral texture platform to showcase the intense flavor of the former. One of the best seafood dishes I think I ever had. Simple yet interesting with plenty of umami depth. 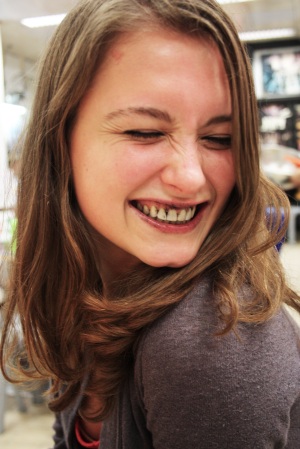 Next up “crab with black pepper”. This description gave 0 credit to the dish and we kind of just wanted crab, so when this came out our jaws dropped to the floor and we attacked greedily. A gigantic cooked crab, dissected into claws and legs scattered around the dish, appendages containing perfectly cooked juicy, sweet  flesh that ripped apart into tender white strands when bitten into. The shell still had some of the organs attached (on purpose) and was deep-fried along with them to make them unbelievable crispy out- and creamy inside. The whole thing was covered by what we agreed was an incredible crumble of crispy oiled bread crumbs, plenty of garlic, onion, bits of crab, a lot of black pepper and, very importantly, bits of red chili which gave  the dish a fantastic heat. On the side, squares of toast to scoop up the crumble with – they know we wouldn’t leave a single spoonful, even after the crab was gone. 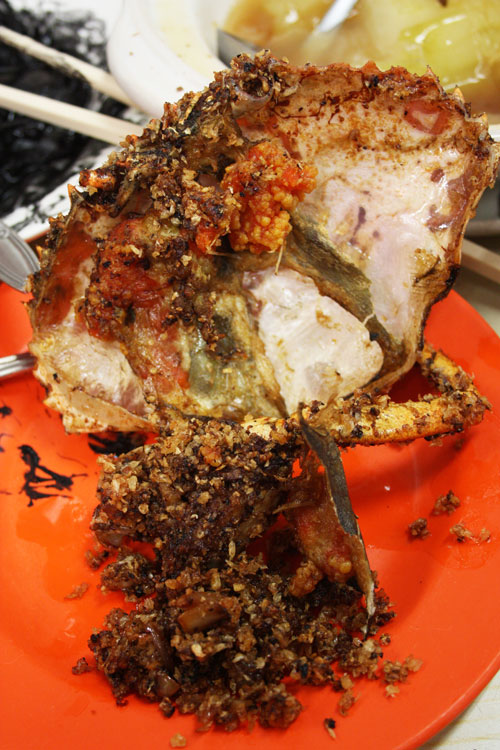 And lastly, something controversial but cherished in Chinese cuisine, which I’ve heard described as having one of the most interesting textures in the world of edible proteins – shark fin soup with spring melon. A gooey, gluey, viscous, thick, gelatinous seafood broth with delicate strings of rice noodle and shitake mushrooms suspended in it. One gigantic slightly cooked spring melon, sweet with a very bite to it, cubed to make it easier to scoop out, in the center of the bowl. And then there’s the shark fin. Sinewy, kind of crunchy but still gelatinous. Chewing it feels like biting down on a thousand tiny bubbles and bursting them, releasing air from something porous but in a way that pushes a crispy texture to meet the teeth. One can continue chewing it for a surprisingly long time and it maintains this texture (bursting bubble after bubble) until it eventually seems to disappear and leaves a deflated little goop in your mouth. The fin actually has no real flavor on its own but soaks up those of the broth beautifully. A super interesting, texturally complex dish but maybe not QUITE worth the de-finning of an endangered species. At least in my opinion. Then again it is one of the most traditional and antique luxury food items and delicacies in Chinese gastronomy and to take away thousands of years of history by banning it altogether is kind of a slap in the face to the culture. But whatever, pick your own side. 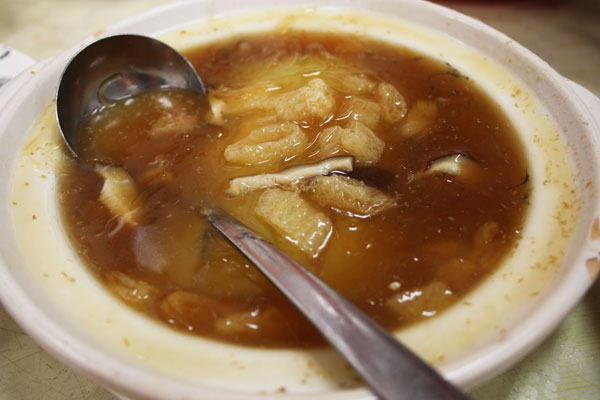 We were noticeably silent all throughout the meal – for around a half an hour not one of us said a word but instead just took in the beautiful noise of the place and tried hard to engrain the textures and flavors we were experiencing into our memories. When I did eventually get up to (try to) take sneaky candids of people at their tables, this guy who claimed to be the #1 fan of the food center noticed and came up to our table to talk about the place and ask how we were enjoying it so far. When we expressed how we felt, gesturing quite a lot for emphasis, he bought us a beer. We cheersed and downed our teacup-full and listened to him talk about the place, its history, the concept behind it. To sum it up, it was exactly what I thought – simplicity, togetherness and freakin’ good eats. At the end of our meal, he called over the famous Chef Bobby (see minute 3:11 of Anthony video below) and I thanked him personally for a great meal. As Chinese custom dictates, we took a photo with him and our new friend. This one’s for mom. 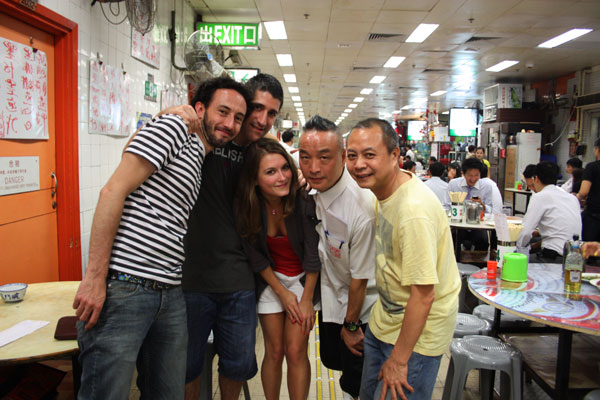 As we bid adieu to this place, we swore we’d come back because if given the opportunity, it is impossible not to. The atmosphere of the place is intoxicating, the food mind-opening, the experience life changing. I left a happy, happy girl. In a city where food is so important, is such an integral part of culture and daily life, I found paradise.

This was my face after dinner, on the escalator ride down from heaven, back into the real world. To see Anthony’s check out his experience here: