There’s a place hidden deep within Hong Kong’s financial district which reminds me a little bit of home (by that I mean Boston, this time). It’s a cross between an Irish bar and a Belgian Brewhouse called Frites. Huge projector playing sports (by that I mean The Olympics, this time), 70 Belgian beers on the list along with 70 stacks of coasters, a list of 10 different types of “mussel pots” on the menu. Not too many gems on tap but I’m used to that by now. Specialized glasses for the more wheat-y or hopsy varieties. Not quite Big City in Alston but a baby version.

The foods not bad either, although I wish I had ordered differently. The mussels look fantastic but I really wanted to try the sliders, curious to see whether they’d measured up to the gastropub bites in Boston. I’m kind of divided on how to describe them. While each single part of these burger bites was fantastic on its own (the buns were wonderfully fluffy with plenty of crunchy sesame seeds, the meat patties were plump and juicy, and the cheese melted over the beef nicely), there was nothing that really stood out or wowed me. They were a bit too plain. In my opinion, sliders give the chef an opportunity to be creative – it’s so easy to make one with blue cheese and add a little endive, maybe make the other one a bacon and cheddar burger, hell maybe even put caramelized onions in a third one… The four sliders were all the same and there was nothing creative about them, nothing that made me happy about ordering this instead of a regular sized burger. Super well made but a little too dull for me. I mean, these guys cost MORE than the fried oyster slider at Island Creek in Boston, and notice the difference! 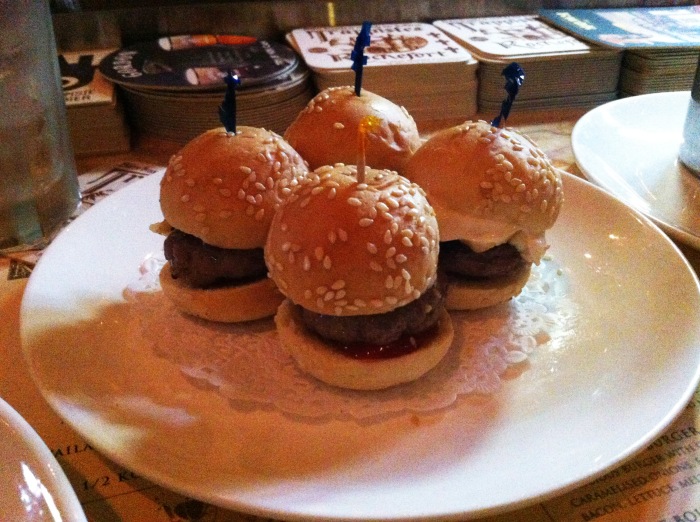 I had a similar issue with the “frites,” a dish which is made out to be the place’s signature snack, considering the name. The fries were well made, thick potato spears, crunchy out and mushy in, but it was under-salted with iodized salt (not even sea or kosher salt) and served with unflavored mayonnaise. I was at least expecting a little bit of creativity with the dip, maybe a little spring onions or curry or, hell, even cheese in there. Mayo is just not trying hard enough. Not all fries need to be parmesan-sprinkled and drizzled in truffle oil, but for the price and size….

For my entree, I had the baked salmon filet, going with number 1 on the menu and thinking that meant it would be one of the top dishes there. It wasn’t. At first it seemed totally fine. The salmon was seared nicely with a orange-pink, juicy center – but then again it’s kind of difficult to screw up searing a salmon. The fish was noticeably under-salted, again, and under-seasoned in general, leaving the freshness of the fish to be lost instead of brought out. The “herbed potatoes” (overcooked, mushy cubes very lightly sprinkled with parsley) didn’t add much flavor either. The asparagus skewers under the fish were also overcooked and mushy, having lost that crisp, fresh bite. I was hoping for the choron sauce (bearnaise with terragon and tomato sauce) to add a little something to the dish but, besides a way too creamy and thick, heavy texture, which kind of punched the light salmon in the face, it added nothing in terms of flavor. I guess the crispy onions on top were nice. But crunchy little fried toppings did not save the day on this one.

Overall the place was a costly disappointment and I don’t think I’m going back for the food. The atmosphere, however, was fantastic and the choice of beers larger than any I have seen in Hong Kong so far. Plus it kind of reminds me of home, all grim and pubby looking….

Maybe next time I’ll just get one of those mussel pots.