For a simple breakfast one morning in Shanghai I chose 85°C Bakery Cafe, a bakery-cafe chain originally started in Taipei but also hugely popular in China. I figured I might as well try the way most locals realistically chow down in the morning before work, without going into a Starbucks. The place is actually more of the Asian equivalent of Au Bon Pain or Panera Bread with a rather large selection of fresh baked (though corporate-standard) breads and pastries, alone with around 9-10 different types of coffee available iced or hot. What did I try?

Pork Sung Bun: A very nice, flaky, buttery dough formed into a round bun with crispy, layered edges and a toasted, tan top with a few black sesame seeds sprinkled on for good measure. The pastry is filled with rousong, also known as pork floss. I’ve had a similar, yet slightly sweeter one at Bounjour Bakery in Hong Kong. This stuff has a consistency of cotton candy and melts quite similarly on the tongue after a few seconds. It tastes a bit like very salty and cured pork with a touch of fatty pork rind. The excess salt in the flavor is soaked up by the bread surrounding it, which is not too heavily seasoned. A buttery, savory and comforting breakfast ideal when still oven-warm. 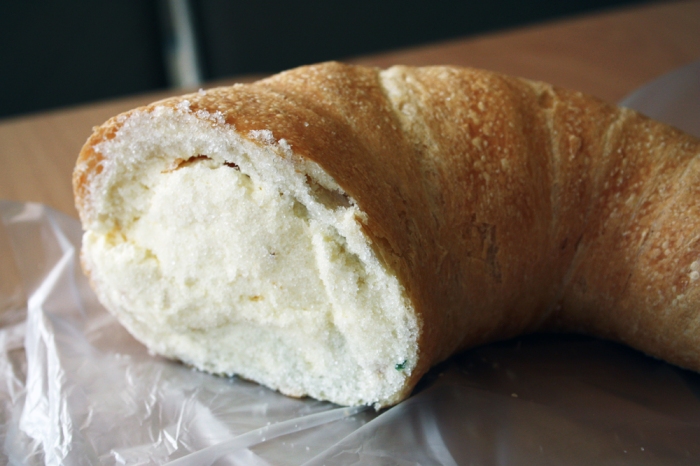 Cape Croissant: It’s called a “Cape Croissant” but that doesn’t really explain what it actually is or is trying to be. Kind of seems like an imitation of some Western pastry based on a completely misinformed idea of what that is, resulting in something that isn’t bad but isn’t very good either. A chewy, salty bread shaped like a horn which is filled with an incredibly thick, sweet butter cream, the outer edge dipped in plain granulated sugar. I guess it was a bit like eating buttered bread dipped in sugar, which I’ve had as dessert on camping trips before, but which I expected a bit more than from this place. The cream was overwhelmingly fatty and dense, and the sugar gave it a very mild, dull sweetness, which wasn’t particularly appetizing and which flat-out clashed with the saltiness of the bread.

Osaka Pizza: An interesting looking creature but, again, not one of my favorites. A very thick, cold, pizza-like dough folded over way too many “toppings” which included scallions, lettuce and other vegetables along with this droopy mayonnaise-cheese fusion dribbling down the side. The stuff was topped off with thin ribbons of hanakatsuo, dried and fermented bonito tuna with a very delicate texture and a great, slightly fishy umami flavor. Besides this one ingredient, I didn’t care too much for the pizza. Curious about the story behind it, I looked up “osaka pizza” and read up on okonomiyaki, which is a very popular Japanese pizza with a pancake-like “dough” which is baked or grilled with a variety of toppings, such as meat, shrimp, octopus, veggies, anori and a thick, sweet Worcestershire-type sauce. In reality it is more like a omelette or a pancake than a doughy bread-based thing and it seems pretty delicious indeed. Maybe someday I’ll try the real thang. Until then, best avoid.