Back in the West, I am less of a Westerner than I was in the Orient. I’m surrounded by authentic and inexpensive trattorias and enotecas, by bakeries with crusty sourdough bread and housemade marmelade, and on almost every corner of every street there is a privately owned little cafe in which every single employee knows the difference between a dry and wet cappuccino. In other words, there are many things at my fingertips that I couldn’t find in Hong Kong quite so easily. Yet one of the things I’ve been craving the most in the past few weeks is that funk, that stank, that crazy fungal twang of some of the Orient’s most beloved ingredients. I miss the murky umami flavors of the fish sauce and the slightly off, sickly sweetness of plum sauce. I miss the heat of chiles and the briny mollusk saltiness of oyster sauce. But what I miss the most is that twang that comes from fermenting stuff, what Westerners are most familiar with in the form of stinky cheese (Epoisses, Brie de Meaux, etc.) and cured meats, and which Asian cuisines showcase in things like stinky tofu, douchi (black soy beans) and miso paste. The type of stuff you put in your mouth and repulsion is as much of an intrinsic reflex as delight is. Korean kimchi definitely belongs in this category of foodstuff. The briny, stinky flavor of the pickling liquid (brought to an even higher plateau by the funky umami of the shrimp sauce and fish sauce also thrown in there) combines with the sharp heat of the red pepper to make a jus which the cabbage, scallions and radishes can safely rot their own vegetal flavors into. It’s a wonderful thing that you can smell a mile away (prompting my Argentine roommate to throw the stuff out the window whenever I bought it in Hong Kong) and be either horrified or completely intoxicated by.

Anyway, when my friend recommended on a freezing cold day that I try out one of her favorite funky Korean dishes, Sundubu jjigae, at a little Korean place called Kaju Tofu House in Allston, I jumped at the opportunity and agreed to meet her that day for a late lunch. Sundubu jjigae is a Korean stew (that’s the jjigae part) traditionally made out of soft tofu, seafood, veggies, dried kelp, dried anchovies, oyster sauce and lots of gochujang (fermented Korean chili pepper paste) to make it spicy and add the funk. It is served boiling hot in a cast iron bowl. A raw egg is often added, which cooks up a bit in the broth but just to the point of being safe to eat. It stays silky and liquid, thickening the broth and adding some texture to it. Some rice and a bunch of banchan are also traditionally served on the side, in case one wants to pick at some more pickled and fermented stuff while spooning this delicious soup. The banchan are mostly served cold and are often pretty refreshing, offering a nice break from the heat of the soup.

Soon after I ordered my Kimchi and Oyster Tofu Soup, the banchan started landing right under our hands. There was, of course, kimchi, funky and spicy and sour pickled cabbage. There was also pickled cucumber (cucumber kimchi) wedges flavored heavily with the same red pepper powder. There was rice wine vinegar and sesame oil marinated bean sprouts, some seafood frittata with crab and scallions, a sweet and sour boiled potato dish with a thick sauce made of barley malt syrup and soy sauce, some dried seaweed (for good measure) and some thin, chewy scallion pancake pieces. There was also some wonderfully fluffy white rice in a bowl to use freely. 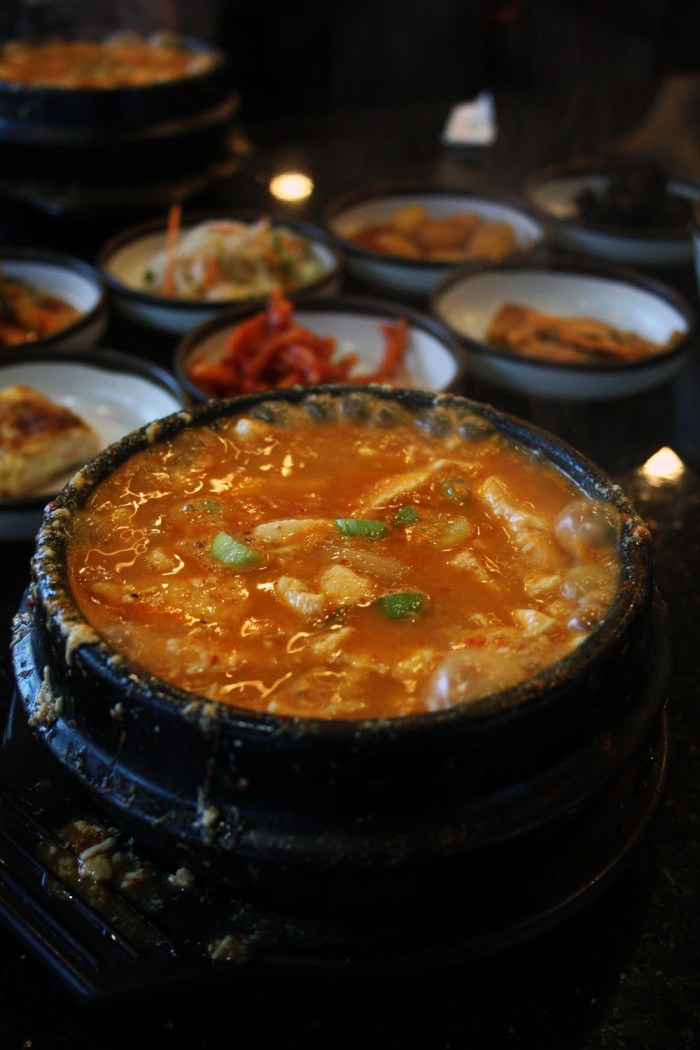 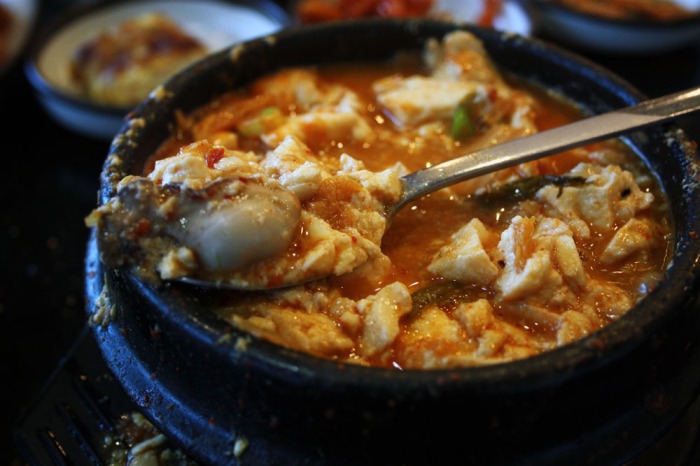 The arrival of the soup was the most exciting part of the meal, though, and I couldn’t stop snapping photos of this bubbly cauldron of jiggly tofu and squishy oysters. After cracking the raw egg into the broth, the whites sort of sank into the rest of the broth and started turning a misty white, camouflaging with the little curds of tofu around the egg. The yolk turned thick and velvety smooth within seconds and, when mixed into the bright red broth, seemed to ease the intensity of some of the flavors within, while also making the broth luxuriously thick and rich. Originally the silky tofu came in what seemed like fairly large blocks immersed in the broth. My savvy friend showed me how to break up the tofu a bit, using the long-handled spoon provided, into a more mushy consistency and a size that would fit onto my spoon and into my mouth. The stuff was awesome, steaming hot and comforting with an interesting texture and BURSTING with flavor. The broth was funky from the oyster sauce, sour from the big leaves of pickled kimchi floating around in there and spicy from the gochujang. These three flavors blended beautifully to create a wonderful round mouthfeel, leaving a mostly sour aftertaste (but in a good way!). The tofu soaked up all of the crazy flavors of the broth and provided a soft, mushy canvas for these flavors to dance around on. One could also add some rice to the soup to further soak up some of the liquid, thus indirectly enjoying its flavor in yet another way. The kimchi cabbage and onion were cooked through but still had a nice, crisp bite to them. Slimy bits of dried kale also floated around, providing a soft texture as well. The soup had a generous amount of slippery smooth oysters cooked into it as well and these were wonderfully satisfying, velvety soft when bitten into (or just kind of mashed against the roof of the mouth), truly tasting like briny seawater. It was great. It was all absolutely delicious, filling without being too heavy, super hot and comforting on a icy cold day, spicy enough to make my nose drip and to thaw my frozen face.