I turned 24 last week and to celebrate my best friend took me out for some drinks, after our annual trip to the painfully glittery So Good store on Newbury Street for a painfully glittery birthday tiara. Our destination was to be Lolita Cocina & Tequila Bar, a bawdy, kinky, Red Light District style “taboo tequilaria” famous and overrated for its playful (yet largely uninspiring) margaritas, sangrias and mojitos, as well as the cotton candy they serve at the end of your “inventive (non-)Mexican-(non-)American” meal.

We didn’t get to the cotton candy, as two jerks at the bar and the fact that a shot of anejo was served with an orange slice coated with coarse pink sugar managed to ruin our mood and piss all over my bday parade… Where to go to salvage a night left in glittery, bejeweled shambles? My safe haven, a place that I have never left on bitter terms, a little spot right around the corner from my final resting point of the night, a place where I’m always treated with lovin’ – Citizen’s Public House.

Although I usually go there for my weekly staple of scotch and beef jerky, on this night I needed to wash the taste of that horrible tequila+sweet fruit combo out of my mouth, so I went with a couple bittersweet Fernet & Cokes ($3 Branca on tap, I love this place… ) and reminisced about my bittersweet 23rd birthday in Argentina. For some reason, I drunkenly decided at one point that a Scotch Egg would be a perfectly random thing to order off the CPH menu. I’d never had a Scotch Egg before and from the description I was half expecting it to be pretty disgusting, but I knew it would soak up the bday booze at least partially. Turns out I was only right about the second half of my assumption.

Gash darnit, it was perfect for the moment. I felt good about it the next morning and I still feel good about it today. A soft boiled egg wrapped in spicy chorizo meat, coated in breadcrumbs and deep fried. Sitting in a pool of thick and delicious gravy and sprinkled with parsley for some color. A nifty way to have your sausage, egg and gravy sandwich but as a late-night snack. My knife met with a beautiful crunch (but not too much excess grease) from the coarse breadcrumb crust, followed by soft chorizo that gave way to the still quite runny egg on the inside. The latter oozed forth its thick, golden yolk, mixing with the starchy, salty and velvety smooth gravy on the bottom. The gravy added some moisture back into the chorizo, which had dried out a tiny bit from the frying process, resulting in a perfectly juicy, salty, sinfully satisfying bite each time. Two things, in my opinion, made this version of the Scotch Egg fantastic: 1) the fact that the egg was not completely hard boiled, thus not rubbery, tough or boring, and 2) the fact that spicy chorizo was used instead of a sweet sausage, packing the stuff with a nice depth of flavor which stood up to the fried breadcrumb coating. 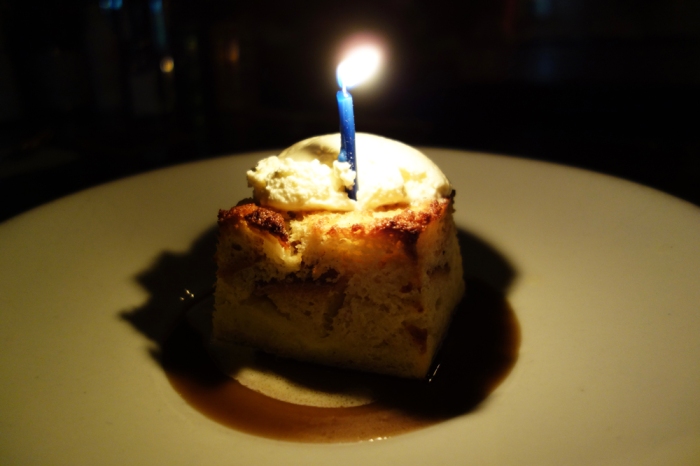 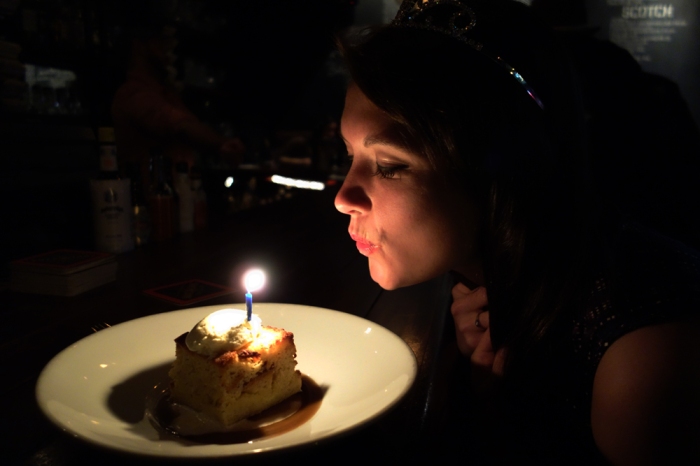 And for dessert, CPH’s Toffee Bread Pudding. Either this dessert has taken Boston by the storm lately or I have just started to notice it, but it seems like it pops up on menus all the time these days, and I’ve been having many versions of it around bday time. What I liked about this version was that the chunks of bread within the pudding were still firm. The exterior remained crispy as toast, while the inside was moist and not as mushy as it can sometimes be, when soaked in too much cream and overcooked. The slightly salty caramel sauce on the bottom was thick and sticky, not too sweet and not corn syrup flavored. The sauce added some moisture to the crunchy outer layer of the pudding and some flavor to the dish overall. The whipped cream diffused some of the deep flavors of the caramel and added a much needed, though false sense, of airiness to the dessert. And there was a candle on top. I’m a sucker for bday candles. 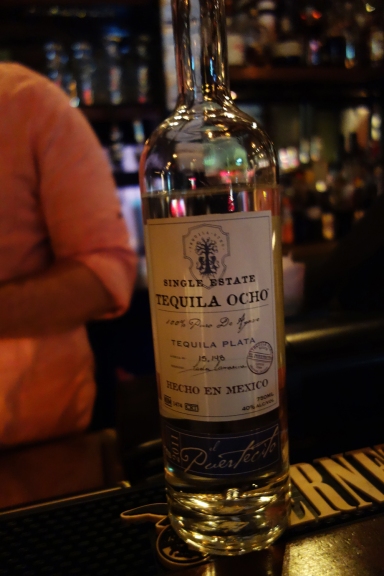 And I got my wish! A generous shot of this wonderful novelty tequila as my nightcap. Yum yum.

One thought on “Soaking Up the B-Day Drinks with Some Bites at Citizen’s Public House, My Safe Haven of Long”