Compared to the trendy and scattered valet-chic dining culture of L.A. or the locavore, cage-free, organic, food-nerd scene of the Bay Area, San Diego is not really known to be one of the culinary capitals of the West Coast. From what I’ve gathered, it has some real Mexican taco and torta shacks, gourmet burgers, a Mexican-inspired but largely American Baja/TJ border cuisine (slap on the sour cream and cheese), eggy hang-over brunch served in huge portions, some seafood and a surprisingly awesome craft beer scene (brewery/bars around every corner). Lots of Adam Richmond and Guy Fieri autographed photos on lots of restaurant walls. Things were a bit heartier than what I expected out of delicate, light-as-a-feather California. But overall, stuff was good quality and often inventive, and significantly cheaper than the same would have been back East. 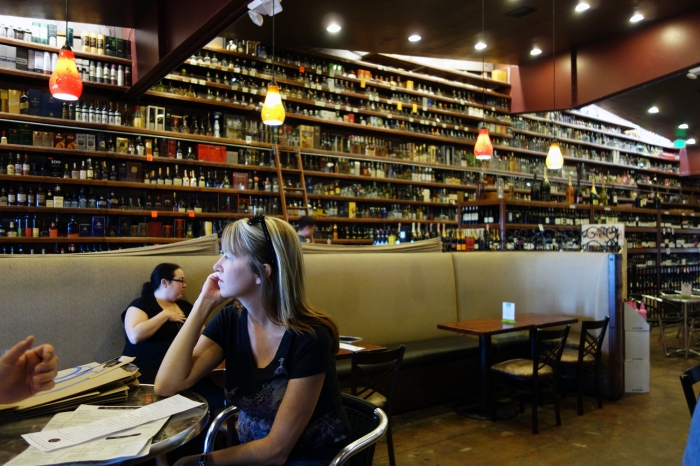 One great little place I visited during my trip was K’nB Wine Cellars, which is a very functional combination of a liquor store/library, bar and restaurant. Upon first walking in, one is taken aback by their booze-wall on the left, one which boasts a ridiculously extensive collection of liquors and craft spirits, as well as one of those old school rolling library ladders to reach them with. Facing this wall are a few aisles of wines, which range from cheaper New World bottles, to local Napa-Sonoma faves, all the way to dusty Old World Bordeaux and Beaujolais. Lining the opposite wall is a beer cooler containing a huge variety of arts-and-crafts microbrews, many from San Diego.

On the right side of the entrance is a small kitchen and a bar with a long line of beers on tap. Comfy booths and tables face this bar. My lunch companion happened to work there so he suggested beers for me to try, which his cool-cranky colleague draught out for me with some serious ‘ttude, into little tasting glasses. I tried the Crispin Hard Cider which was super refreshing and the Alesmith IPA from San Diego which was milder than a regular IPA and thus perfectly hoppy without being too overwhelming. My favorite, however, was the Ironfire Cucumber Ale from Temecula, California. Yes, it is girly. A beautiful light gold pale ale with a mild but very fresh vegetal flavor. I appreciated that it did not taste as if some sort of Green #34: Cucumber flavor-shot had been added to the beer. It stayed light in taste, while still maintaining that satisfying weight of ale. 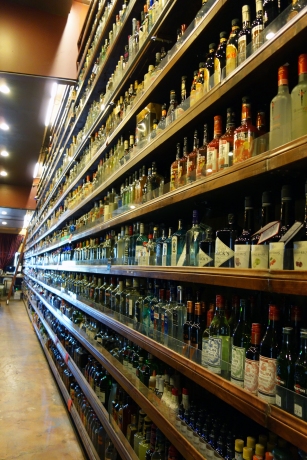 As I was on a non-stop fish taco binge, we ordered the Baja-style K38 Fish Tacos with beer-battered and fried cod, shredded cabbage, radishes, Guac Shak (local) guacamole and a spicy jalapeno white sauce on a corn tortilla. Not too inventive, kind of simple, but with good flavor, freshness and a neat contrast in textures. The tortilla, though a tad drier than I like them, was grilled nicely and had a crunchy surface and edges. The fish, I thought, was a TAD over-fried and consequently a bit too dark but still pretty good, with a crispy coating and soft flaky flesh on the inside. A cream sauce was poured over the fish, with citrus adding acidity and little bits of diced jalapeno and jalapeno juice mixed in adding some heat and waking up the flavors of the batter. The cabbage offered a nice cool contrast to the warm battered fish and the guacamole (more citrusy than garlicky) was hidden between the cabbage shreds, gluing them together. I really enjoyed the addition of radish slices to the taco, as these packed a peppery and spicy but still cool punch, to go along with the jalapeno sauce, and added even more crunch to the guac-slaw portion of the taco. Taken all together in one bite, it was really nice, juicy and mushy from the guac and the sauce, crunchy from the batter and fresh from the veggies. Not the most exciting fish taco I ended up having in SD and I think I prefer my pescado grilled, but not a bad start at all. 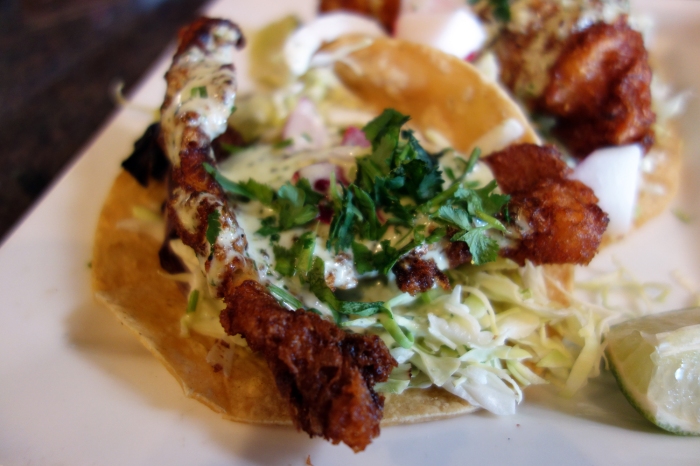 But a gal can’t subsist on tacos alone. Well… yes she can. Anyway, we also got the BBQ Chicken Lavash which came with grilled red onions, mozzarella, spots of BBQ sauce and a bit of cilantro sprinkled over the top. The lavash flatbread was nice, very crispy on the bottom and not too oily. This base was also very thin, allowing the toppings to shine and really just there to provide a surface to spread these on. The chunks of chicken breast were moist and the BBQ sauce was tangy and sweet, providing the majority of the flavor to the dish. Spots of mozzarella that oozed over the bread, hydrating it a bit, added a gooey, comforting element, while grilled and sweaty caramelized onions added a bite and a hint of sweetness to offset the acidity of the sauce.

I had a nice time at K’nB. While the food did not particularly blow my mind, the dishes were clever enough and certainly made a delicious side-snack to all the wonderful stuff they have bottled and on tap there. I would say this place is first and foremost a bar, and a fantastic one for out-of-town’ers to try some local craft beers. Definitely satisfying and enjoyable, but the food here is a sidekick to the brews.

In addendum, do buy some of the Chingón Hot Sauce, a locally made 3-variety hot sauce, that serve and sell at K’nB. I got the habañero and just had it with my breakfast sandwich a few minutes ago. It has wonderful flavor and is super spicy. No preservatives or corn syrup – just pepper, vinegar, sugar. Trust me, it’s delicious.