This past weekend found me in Miami, for the first time in a long time, walking under an overcast but bright sky and reminding every little previously hibernating part of my body of the existence of palm trees, of warm humidity, of sea breezes and of the magnificence of a warm hand around your own, especially when combined with the three of these.

The trip was also a pretty educational one, as I learned a ton about the changing landscape of Miami’s gastro culture- the proudly local gourmet places popping up here and there, the emerging lunch, dinner and quick bite scenes of up-and-coming neighborhoods, the deliberate ode-to-Miami menus at restaurants here operated by famous chefs, and how all these offset the beautiful but shallow see-or-be-seen dining culture that has characterized popular Miami for far too long. And, well, I also got to try Florida Stone Crabs for the first time ever. 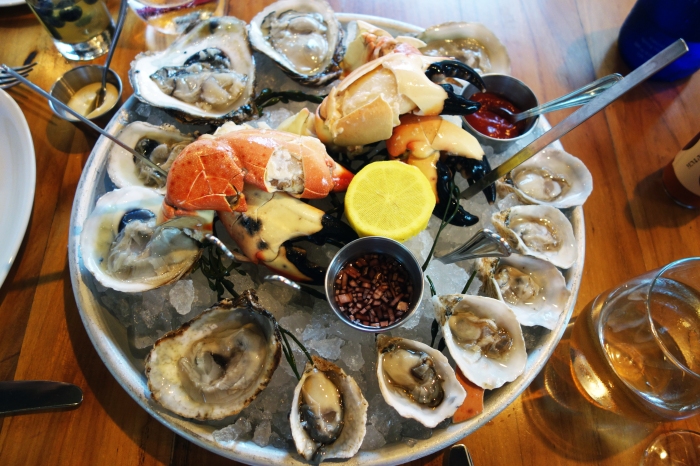 The Dutch, located in the elegant belly of the W South Beach, is a good place to get these, though during season they pop up at pretty much any restaurant in Miami with a decent raw bar. After ordering a cocktail and an Avinyo Cava Rosado Brut, which I (correctly) suspected would match the weather, the mood and pretty much any raw seafood that came my way, we ordered some Belon and Kusshi Oysters, along with 4 claws of Stone Crab to try. Having heard about their juicy texture and delicate flavor, I’d been wanting to sample these babies for years, but they are notoriously difficult to find in the Northeast, and I’m never in Miami during season. Luckily we caught them at the very end of the season (which ends in March), and the fact that they were from the end of the season didn’t really seem to impact the quality too much – at least according to my lunching companion, who had had them many times before. 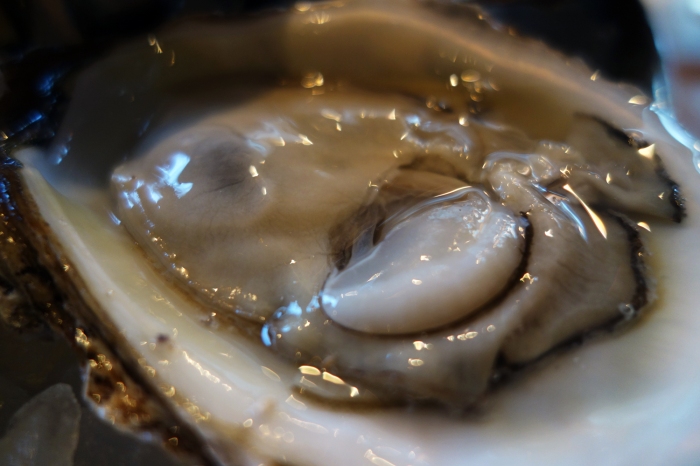 The Wild Caught Belon from Maine were a delicious prelude. It’s actually a bit of a faux-pas to call these “Belon” since true Belon comes only from the Belon River estuary in Brittany. They are of the same species, but these were transplanted to Maine in the 1950’s, where they adapted to the cold water and established beds along the coast in spots where rivers from Maine meet the ocean. So I guess these little pilgrims grow and flourish in an aquamarine environment pretty similar to that of their Olde Country.

The oyster itself is surprisingly big, filling its round, flat shell and almost overflowing from the cup in the center. The meat is very plump and satisfying, enough for a whole mouthful of the slippery, almost creamy, messy stuff. Though pretty big, the adductor is not too tough at all, but looser than those of oysters I’m more familiar with. Everything around it is very delicate, especially the frilly black-lined gills, which melt in the mouth beautifully. In contrast, the flavor is pretty intense and metallic, not as murky or briny, but fresh tasting with a slightly sweet finish to it. The flavor is robust enough for the animal not to need any topping, though I appreciated the sherry mignonette and cocktail sauce provided.

We also got what I think were Kusshi Oysters (though I don’t remember where from), which I haven’t ever had before. They were definitely more humble than the Maine Belon in flavor – much sweeter without too much minerality or murky brine. The texture was nice, very small, delicate sips which made my mouth cave in a tad to savor them fully. They were firmer than the Belon, with more of a bite from the adductor, but very soft at the gills and belly.

And now on to the good stuff, the Florida Stone Crab claws, steamed and pre-cracked for our convenience. The latter is actually a necessary part of serving them, since the shell is thick and hard as porcelain. The cross section of the shell actually looks exactly like porcelain, white and shiny, and it makes the exact same sound when whacked against a plate – it’s uncanny. The claws are strong enough to break an oyster and other smaller mollusks in half, which is actually what these beasts feed on… fancy. So you know their own flesh tastes pretty good. And it really does – though very mild, but sweet and very similar to lobster meat, although a bit more delicate in flavor. The texture is less tough than that of lobster and is relatively lean, with not much pink fat floating around on that meat. The fat there is, however, is silky smooth and delicious. The meat separates quickly into its fibers in the mouth, but remains juicy and moist, almost hydrating (though not watery), until the finish. I appreciated the mustard cream provided and though the claw didn’t really need it, it did give the sweet meat a nice tangy contrast.

The Dutch is also just a great place to sit around and enjoy being outside without actually being outside. A wall of transparent netting separates the restaurant from the hotel’s lush green garden, which eventually leads to the beach I think. The sun shines in through the canopy, but just enough to light the place without being too piercing. Birds fly purposefully across the restaurant every once in a while, giving the place a sense of movement and bringing nature closer to the table. It’s all very relaxing, private and nice.

While considering the cocktail list, our waiter recommended their signature cocktail, the English Rose, which apparently won some award not too long ago, making it something the place is particularly proud of. And it was very nice indeed, although nothing too mind-blowing, a very aptly named classic (though not too exciting) beauty. Plymouth gin, Dolin Blanc vermouth, some earthy, vegetal rhubarb syrup, delicate and sweet muddled strawberries, some lemon as a garnish, burlesque bitters for an extra kick to the simplicity of the fruit, and egg white for a foamy, frothy finish in texture. The egg whites picked up mostly the flavor of the bitters, amplifying the latter and helping it play on the same field as the sweetness from the strawberries. Light and girly, delicate but complex enough to satisfy.