In honor of the first Shake Shack opening in Boston tomorrow, on Chestnut Hill – goddamnit, those spoiled B.C. kids get everything… first El Pelon 2 after EP 1 next to my place burned down, and now this! – I decided to publish an article I had been saving for later about an experience I had at the Miami location of this nouveau fast-food chain, which has hit the East Coast by a storm since its founding in 2004. Take that, California… Although for the price In-And-Out Burger is truly of unbelievable quality, we’ve got our own under-5$-not-just-during-happy-hour burgers searing up and sizzling in the East.

A bit of history: Shake Shack started as a humble little hot dog cart in Madison Square Park in Manhattan and originally popped up to support the Madison Square Park Conservancy’s summer art installations. Following its debut, the cart turned into a pretty popular spot and local burger/dog nerds were lining up daily for their stuff. The shack (then, literally) became so popular, in fact, that it won a bid to open a permanent kiosk in MSP. In 2005, only a year after their initial opening, Shake Shack was voted as having the “Best Burger of 2005” by New York magazine. It got its beer and wine license in 2007. After opening a few more stores in New York City, the chain expanded in 2010 to its first non-NYC location, Miami’s South Beach and then to Washington D.C. in 2011. It hit Connecticut the same year and Philly the next. Yale got one in 2012 as well. In 2011, Shake Shack opened a location in the Mall of Emirates in Dubai, one in The Avenues mall in Kuwait City and one in Doha, Quatar…random… And now, Boston (!) and London is next.

They’re doing well, and understandably so. Fresh, never frozen 100%Angus beef patties, melty American cheese, simple leaf lettuce and Roma tomatoes, onions and pickles on request, Thousand Island-style ShackSauce (a combo of ketchup, mustard, mayo), potato roll bun toasted in butter… They even have this newfangled high-heat miraclean griddle which does wonders to the exterior of the beef…but more on that later.

Along with In-And-Out and Five Guys, Shake Shack is fighting the good fight. Stop going to McDonalds or Burger King or Wendy’s or Sonic for that cheap thrill hunk of trashcan-smelling calorie-bomb. Seriously, stop…

The South Beach location has a pretty cool vibe to it, packed with tan young faces looking to stuff said faces with a not-so-unhealthy burger or dog while only spending a few bucks near the beach. The restaurant has a pretty chic (especially for a chain), environmentally friendly interior, with wooden tables (recycled from bowling alleys?), plywood flooring and a living Wall of Green made of hanging ivy and vines. Neat. The menu is displayed for customers in line – hamburgers, flat-top dogs, french fries, shakes and frozen custard – nothing crazy, just the stuff that original shack became so successful for. 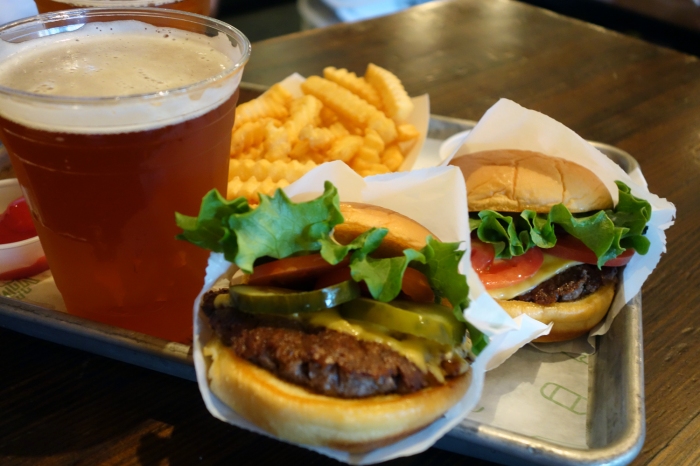 And, well, I guess they have their own signature brew and a beer-wine license, which doesn’t hurt. To start we got two ShackBurgers at $4.75 a pop, some fries and their Shackmeister Ale, brewed year-round just for Shake Shack at Brooklyn Brewery (beginning to love these guys…) The ale felt more like a lager, not very hoppy at all, but crisp and light and a good accompaniment to the burgers.

Crinkle-cut fries, golden brown, super crispy, not too oily. Seasoned nicely with the ridges catching more of the salt. Still moist on the inside, definitely better than In-And-Out’s dry old frites. 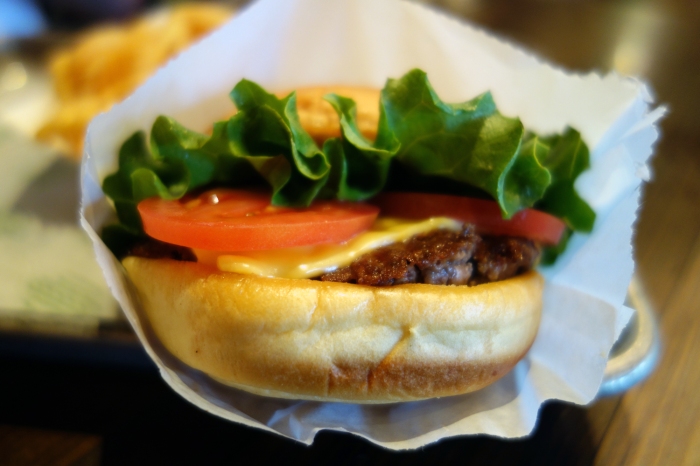 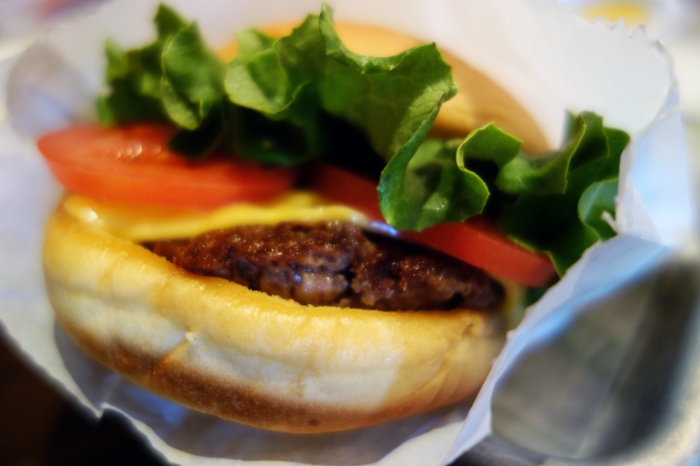 ShackBurger with lettuce, tomato and Shacksauce. Request onions and pickles separately. Wowza. One of the beefiest tasting burgers I’ve had at that price. To grill their patties, Shake Shack uses high-heat miraclean griddles, upon which they smash the beef and then scrape it off with a paint scraper before they are flipped. The process results in patties that are deliciously juicy on the inside, but which have a charismatic, very crispy char on the exterior. The beef is not overworked by any means, so it crumbles nicely with pockets of air between the chunks of ground meat. These pockets, of course, are undetectable while eating the thing, except in that they make the burger light overall and easy to digest, very unlike those dense wads of whatever served by the clown, the king and the red-headed witch. The cheese isn’t too interesting, but it also does not try to compete with the flavors of the meat or the sauce, which are enough to make each bite of the burger satisfying. Said ShackSauce is yummy as well, Thousand-Island-like but not really similar to that of the sweeter In-And-Out sauce. ShakeSauce seems a bit zingier, with maybe more mustard than anything else. It is also smoother in texture, while In-And-Out sauce has a relish-y crunch which steals too much away from the flavor of the meat. The red (imagine that!) tomato slices are plump, juicy and flavorful as well, not watery in the least. The lettuce is leafy green though I actually would’ve preferred a bit more crunch in their texture (could iceberg lettuce actually be better under certain contexts?!) The bun was great, delicate sweet and toasted in butter for extra richness in flavor. It was firm enough to hold everything together and did not get soggy from the sauce, of which there wasn’t an overwhelming amount anyway. Though satisfied by both flavor and texture, I felt light as a feather after the ShackBurger and actually decided to try out more of their menu items. Maybe that’s the secret to their success – make their stuff light enough to leave customers wanting more. Either way, A+

Next up, the Shack-cargo Dog with cucumber, tomato, onion, relish, pickle, pickled pepper, celery salt and mustard. Dragged-through-the-garden Chicago style. It’s nice of a New York based chain to admit that the best hot dog is the one prepared according to Chicagoan standards, and to feature it as one of their top signatures (but without the poppy seed bun). A delicious all-beef frankfurter cooked before being split open and grilled (so, a chardog, techniqually). Slicing the thing open and grilling the interior actually added more surface area for the meat to caramelize and become crispy and delicious on either side. The “garden” topping were great too – very fresh tomatoes (sprinkled with celery salt for a wonderful flavoral complexity), thin slices of crispy green cucumber, some chopped up onions, plenty of mustard (Heinz, I think, nothing fancy) and some whole pickled sport peppers that added a crunch and a strong tartness as well as a mild heat to the mix. Bun was kind of similar in flavor the that of the burger rolls, sweet and firm enough to hold everything (especially the mustard) together, but still soft enough to give at each bite. And that celery salt sprinkled over the tomatoes really did rock…

When my early-dinner companion jumped back in line, like the wonderful gentleman he is, to get some more stuff to soothe my ravenous appetite with, he surprised me with the SmokeShack, a cheeseburger topped with Niman Ranch applewood smoked bacon (look at that, jumping on the ingredient appellation trend), cherry pepper relish and Shakesauce. The evil powers that be – namely, Ronald and the King – have done everything in their power to tarnish the reputation of bacon-burgers everywhere, single-handedly solidifying (at least in my own mind) the concept of bacon+beef patty(+cheese) with the dread of oily, over-salted piles of satfat, which will leave one in even more of an uncomfortably satiated state than its already horrible bacon-less little bro. However, it seems there is still some light left in a world of greasy darkness. And it comes in the form of this guy, right here.

The same crispy char beef patty, topped with a tad more gooey American cheese, and some crispy bacon (but like actually crispy…none of that soggy, gummy, limp stuff in your average fast food bacon burger) that breathed salty, homey smoke into the beef underneath. Not too much excess grease and what there was the cheese picked up and bounced back. The best part, though, was the tangy pepper relish topping the bacon. It had a mild sweetness to it, along with an acidity and heat from the peppers which cut the fat of the bacon without masking its feint smoke. I appreciated that not too much of their ShackSauce was added to this burger, since the sauce’s own mustard-y tang might have competed with the relish. They held back on the stuff and used it instead on burgers that had more of a need for it. The same potato roll buns threw some sweetness into the salty-smokey, sweet-and-spicy mix. Obviously better gourmet bacon burgers do exist at double the price, but for $6.25 (only a $1.50 more than their basic ShackBurger), the SmokeShack tastes and feels like what a fast food burger ought to taste and feel like.