To this day I am haunted with one colossal regret about my life in Hong Kong. My Argentine roommate and I made a promise to ourselves on our 2nd week in this crazy city that we would figure out the traditional Chinese medicine and dry good stores that line the street of Sheung Wan and Sai Ying Pun. We swore that we would not leave Hong Kong the same way we came, as ignorant Westerns pointing to and cringing at tortoise shells and sea cucumbers, animal parts drying in baskets on the street and stinking up the neighborhoods we adopted as our own for 6 all-too-short months. Likewise, we made it a goal to one day stop by a medical tea shop and, as casually as the locals, shoot back a shot-sized portion of the specific tea-soup we requested. “I will have the 3-spice cooling Pu-Erh, please. No, no, not that one. The Pu-Erh, please.” (NOTE: The latter actually means nothing.)

Well… This didn’t happen. Partly because of the language barrier between Cantonese-speaking Chinese and Anglo-Spanish us, and partly because of the generation gap between the old dudes running these places and the young local vagabonds we did end up befriending, we left Hong Kong just as empty on this subject as when we arrived. 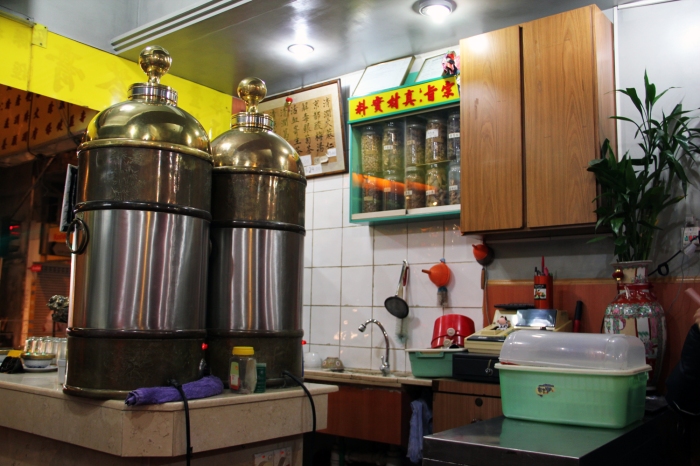 Upon doing some largely futile research, I realized that this is just the way they want it. In 2006, the governments of Mainland China, Hong Kong and Macau jointly applied Chinese herb tea to the list of UNESCO’s Chinese Intangible Cultural Heritage elements. It passed, and became one of the traditional handicrafts on the protection list, leading to international recognition of the stuff as a fundamental part of Chinese culture. Despite this recognition, however, the Chinese guard very closely the secrets of ingredients and the effects they have on the body. The tea is a way of representing the integration of the human being into nature, which is a concept central to Chinese identity. Why would they want the rest of the world to learn about it? Why would they let us make carbonated and corn-syrupped versions of stuff that has been sacred to their culture for centuries in ways Westerners could never understand? 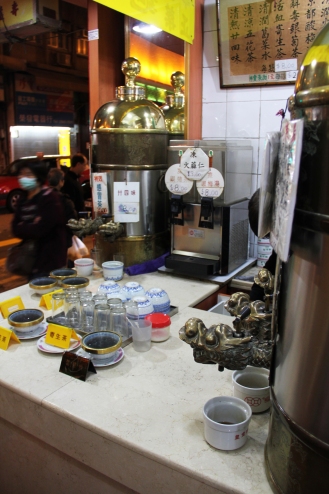 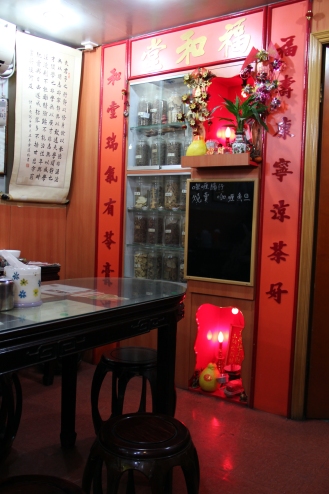 Well, anyway, on my last trip to Hong Kong a friend and I visited one of these herbal medicine tea places on Queen’s Road West, somewhere between Sheung Wan and Sai Ying Pun, pretty close to my old apartment. It was one that I had walked by almost every day on my way to the gym, one that I had always kind of slowed down to gawk at but never entered – not even for a tea egg (which is delicious). Unlike the majority of the customers who stop by at the counter facing the street, wait for a cup of the stuff, toss it straight back like cheap tequila, pay and leave (all within a blink of an eye), we entered and sat. Our table overlooked the massive bronze “bubblers” with beautifully carved dragon gargoyle nozzles, which are placed on the counters. These all contain different types of herbal tea, none of which my friend and I knew anything about. Looking around the tiny little shop, I noticed the 20 or so glass jars lining the black wall, each containing a  different dried flower or leaf, seed or root or grain. We looked rather blankly at the man helping us out who, as expected, spoke not much English. I gestured “any” (which, thankfully, he could tell apart from “all”) and he brought one out. He said something like “three herb tea.” I think I also remembering him saying or gesturing something about it being good for the skin and thus especially popular with the ladies, leading me to believe the thing was packed in collagen. My friend gestured that her head was hurting (from a hangover, which she left out during her turn in our game of charades), and she received something different. 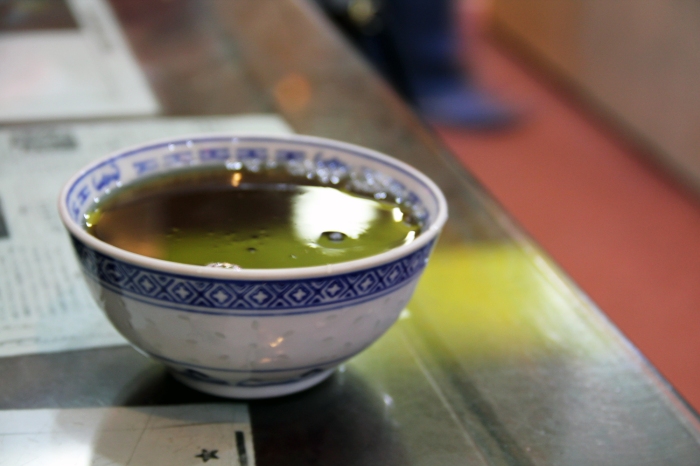 Honestly, mine wasn’t too bad for being medicine. The sweetness was a bit too directionless for me and it was far too mild for my desensitized Western palate- I wished that it were either sweeter or not sweet at all because, as it was, it kept my tongue in a weird state of limbo and even numbed it a bit. The liquid was dense but light, not syrupy in the least. It was hot but cooled rather quickly, which explains why locals drink it so fast. I didn’t really feel any better or worse from it and I don’t think my friend felt a significant improvement on her headache either. But the smiles of the guy was genuine, which cheered us up, and the small talk with a friendly local who had some English kept us entertained for a bit. He was eating herbal tea jelly, a gelatinous version of the stuff we were having, which probably has even more collagen and is probably even better for the skin. I don’t know. I think I remember steering the conversation in that direction a few times and I think I remember him steering it right back. Dale. I don’t get it and I probably never will. Is it tea or medicine? Is it something you drink out of enjoyment or necessity? Do you drink it every day? Do you drink a different one each day or stick to one recipe? Can you drink multiple types in the same day? And what the heck is this:

Well, whatever it is, grind some of it up, heat it and give it to me. It’s cold outside and my body probably needs all the repair it can possibly get.