June 3rd had been marked in my calendar for quite some time, from the moment I got home from Graffiato’s May Industry Takeover Night, where Kyle Bailey and Tiffany MacIsaac fed hungry masses of zombies cleverly disguised as food enthusiasts. This time around it would be a Boston kidguydude at the helm, namely Jamie Bissonnette of Coppa and Toro in my beloved South End. Cooking alongside him would be Jonah Kim of PABU, with Chris Ford, Executive Pastry Chef of Wit & Wisdom, PABU and LAMILL Coffee, spearheading dessert. Drinks by Tiffany Soto, Bev. Manager of the Four Seasons Hotel, Baltimore. Needless to say I had been counting down the days…

I actually managed to get there a bit earlier this time around (10:15pm as opposed to 10:40) in a futile attempt to beat the rush. Apparently word about the event gets out pretty quickly – the place was packed to the brim, with the crowd-intolerant runts of the litter already bubbling out to the curb for a breath of fresh air by the time we got there. The bar was pretty unapproachable, as any bar run by a Master Sake Sommelier should (be expected to) be. The area around the U-shaped pizza bar and the kitchen counter were already teeming with gastro-groupies, their eyes fluttered frantically back and forth, hoping to be the first to jump on a new dish which would repeat itself quite frequently throughout the night, collecting into an excess, even, by midnight. With a huge “fancy” smile on my face I clawed my way aggressively to the counter, behind which the good stuff was a’brew.

I’m very glad Jamie took full advantage of Graffiato’s wood-fire oven and used it to make one of his own specialties, a white pizza with chunks of smoked bone marrow and thin slices of tongue, reminiscent of the wood-fired pizzas at Coppa, which he was repping on this night both in his dishes and in T-shirt form. The slices must have been taken from the very back of the tongue because they were wonderfully tender, melting away into those subtle muscle fibers on contact with heat from my own tongue, not chewy in the least. The flavors of the tongue were nicely developed though mild, similar to a pre-sauce beef brisket. The bone marrow added back the fat which the lean tongue was missing, punctuating the pizza with its slippery smooth meat-butter texture and smokey delicious flavor. The meats were layered atop patches of soft, runny mozzarella with parm grated over. Thin but firm base, a crust crunchy and bubbly enough to not leave behind. 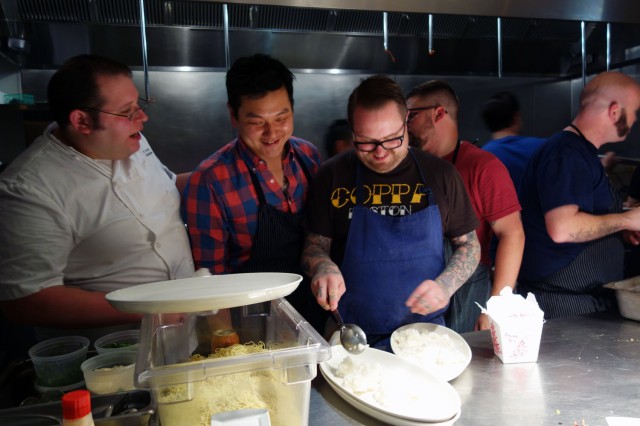 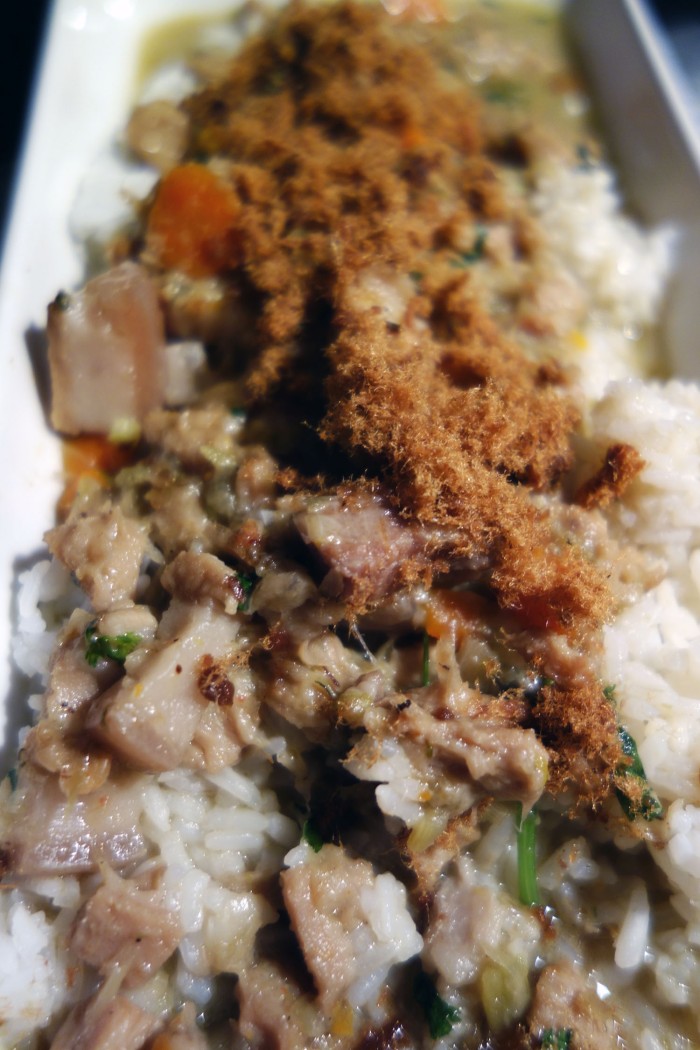 Next, I tried Jamie’s curried stew of tripe, pork belly and, I think, pig’s feet over jasmine rice, topped with pork floss. This was definitely one of my favorites of the night. The tripe was cooked to a point where it was only slightly chewy (pleasant in that each bite brought out more flavor) and the combination of chewy with the fattiness of pork belly made for nice depth and intrigue. The fatty, creamy flavors of the meat were in sharp contrast with the intensely salty and then mildly sweet rousong layered over the top. As always, the meat cotton also added a cool textural element to the dish – dry, chewy, airy, soft. The curry itself, soaked up by the jasmine rice, was great too – light in flavor, with the acidity of lemongrass mixing with coconut milk, which also gave it a creamy complexion. 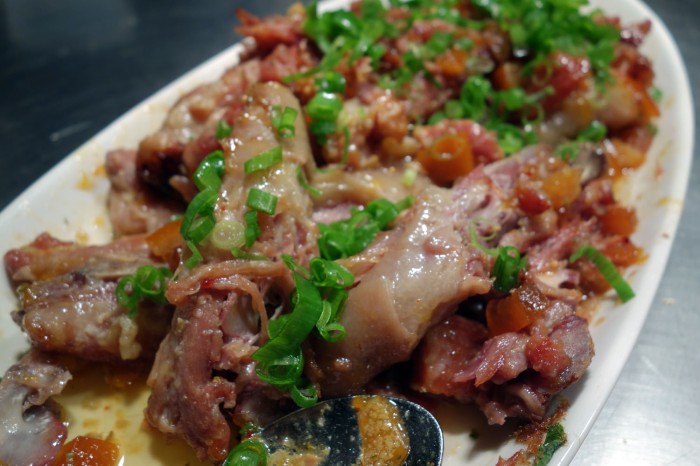 Another Jamie creation, perfectly in line with his mission to show off the lesser-used parts of the pig, was the dish of roasted tails and bones rubbed til shiny in sweet mostarda. Though I unfortunately only came across these towards the end of the night, a small bite was enough for me to remember it perfectly (and hopefully for a very long time!) Crispy, mostarda-polished skin was stretched over happily giggling bits piggy blubber, chewy collagen and juicy, tender dark red flesh that coated my lips in pork-essence lip balm. The smokiness of the roasted meat was balanced beautifully by the jammy dulzor of the candied fruit, that sticky sweet quince flavor (though I don’t know if there was actually quince in there…) and the very feint bitterness from the peel of chopped kumquats. 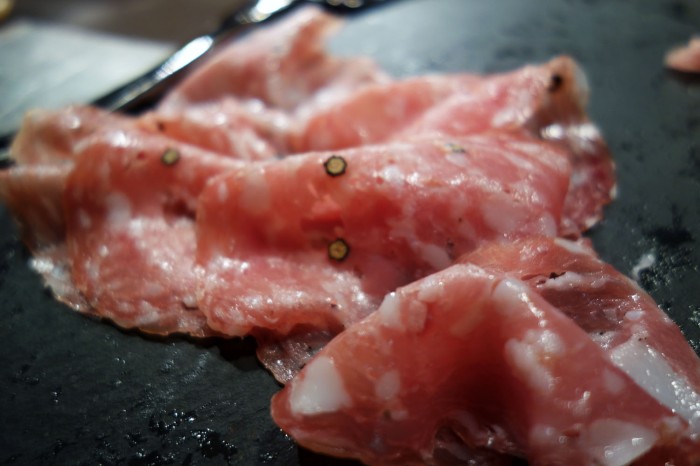 A wooden chopping board appeared with some nicely marbled and very thinly sliced ribbons of salami, punctuated by cross-sections of whole peppercorns, which added some toasty heat to meat that was fresh and light in texture but echoing age in the cure. Next to these, some delightful folds of what I was (and still am) quite certain was leftover tongue, but which the chefs claimed to be penis. I did note that the meat had some pretty well-integrated blotches of fat marbled in here and there which tongue doesn’t normally have too much of. Still, it had that characteristic soft, slightly furry texture and virtually the same flavor as tongue. Although I have tried (and thoroughly enjoy) the creamy, velvety deliciousness of bull testicles, I had never had penis, so I couldn’t have recognized it as such. I do happen to know, however, that bull penis is a bit more like pig’s tail (without the meat) or chicken feet – nothing but sticky skin, fat, some collagen, and bone, maybe some cartilage thrown in there too. These slices were meaty and tender, as well as far too large in cross section to be penis. Hmmmmm….. Although I call b*llsh*t on this one, it did give my friend an incentive for playing a competitive shouting game that was quite popular back in my high school years…

A little grappa here and there…

One of the staples of the night was the Korean fried chicken with what Chef Kim told me was a bourbon soy glaze. These were really fantastic. In keeping with traditional yangnyeom chicken tradition, the birds used were pretty small (from what I could make out from the halved parts, which seemed itty-bitty) and were fried twice to capitalize on crunch, resulting in skin that was crispy enough to make a sound when I tapped it with a fingernail. A totally different concept of fried chicken than the American version, which makes the batter more crusty and grainy, rather than something resembling the coating of a caramelized nut, for example. The meat on the inside was tender and juicy, a tiny bit red in the dark meat (like I like it), and milky-opaque rather than solid white on the breast. The glaze was great too, savory from the soy base, with the acidity of vinegar balanced out by a movement into a sweet direction. I didn’t taste too much of the bourbon that was apparently in there, but deeply satisfying nonetheless.

Also by Kim, a dish that reminded me most of Korean jajangmyeon noodles, curly wheat flour ramen topped and turned in a generous amount of a thick, salty-sweet black soy bean sauce with bits of diced pork in there as well. The noodles were wonderfully moist from the sauce, the strands stuck together to make picking them up in large, satisfying lumps quite easy. The ramen itself was cooked to a tender, springy texture, still firm enough to stand up to the dense, starchy bean sauce. The flavors of the sauce were great, the intense saltiness of the soy bean paste diluted with stock and balanced in flavor with some sugar. There may have also been a bit of oyster sauce in there as well. Little bits of pork tossed in, which added a nice textural contrast and something to nibble on. A very satisfying noodle dish indeed – I only wish there had been something fresher than the spring onion ribbons over the top, maybe a few cool spears of cucumber just to offset depth of flavor and warmth of the noodles. Little white balls of what I think were tapioca or some sort of grain gave the dish a fun look. 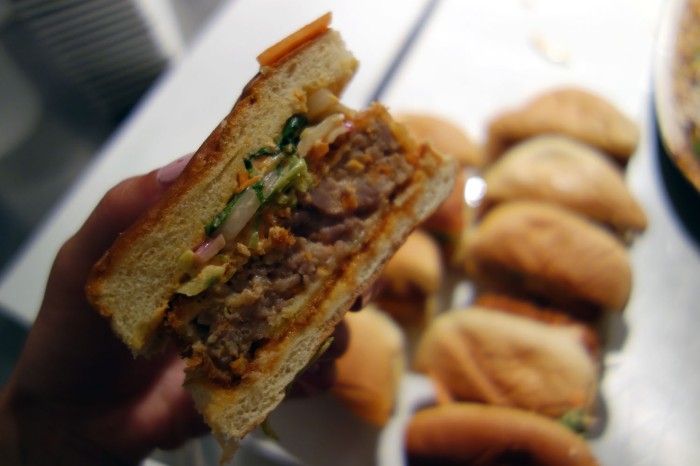 When people started repeating that there were burgers circulating, I knew there must be more to it. Besides the fried chicken, there hadn’t been a single “standard” American animal part served in any dish, so I was hesitant to accept that either Jamie or Jonah Kim were flipping casual ground beef patties. These were actually breaded and fried blocks of pork terrine wedged between very soft, slightly sweet brioche-y type buns (though a bit more pillowy than brioche). On top of the terrine there was a layer of julienned carrots, cucumbers, some red onion and daikon (?) stuck together with a tangy sauce which the coarse breading rubbed up against nicely. 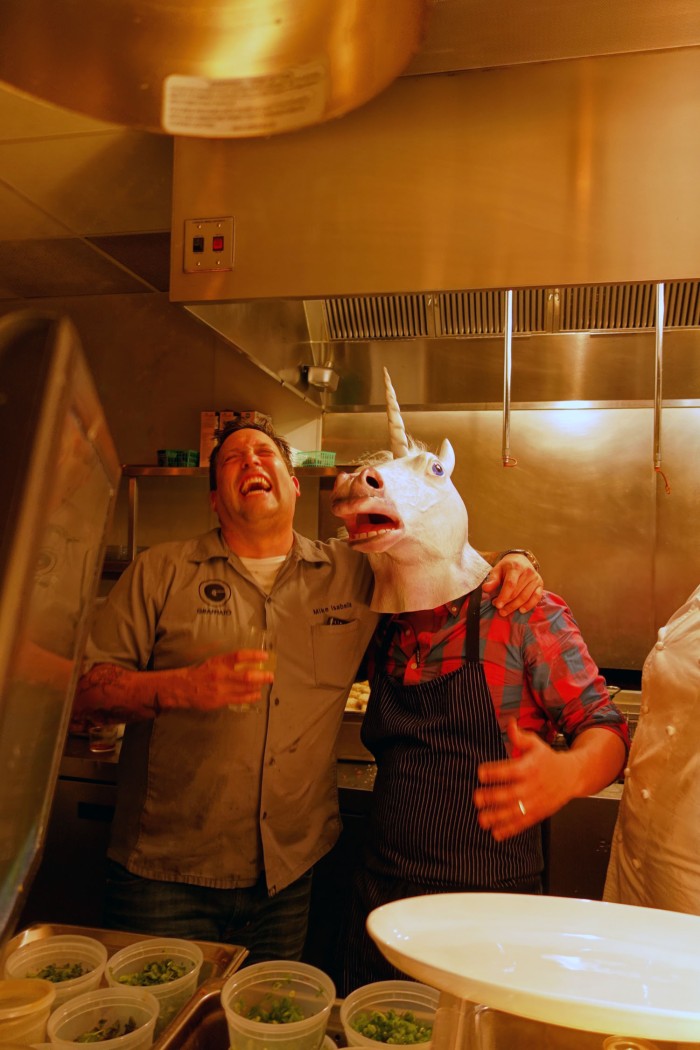 Some silliness and a unicorn happened… 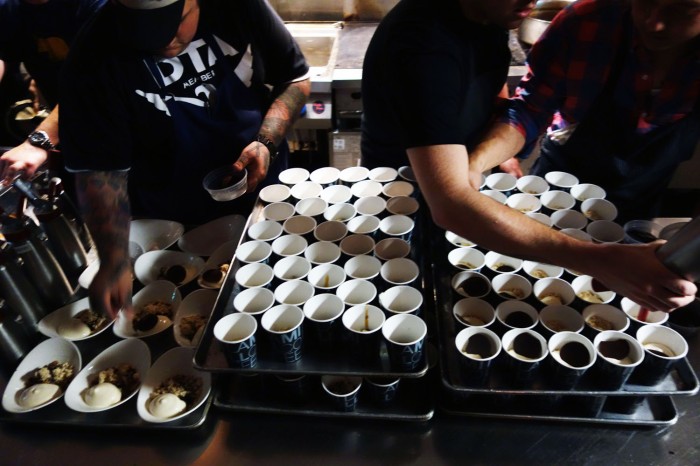 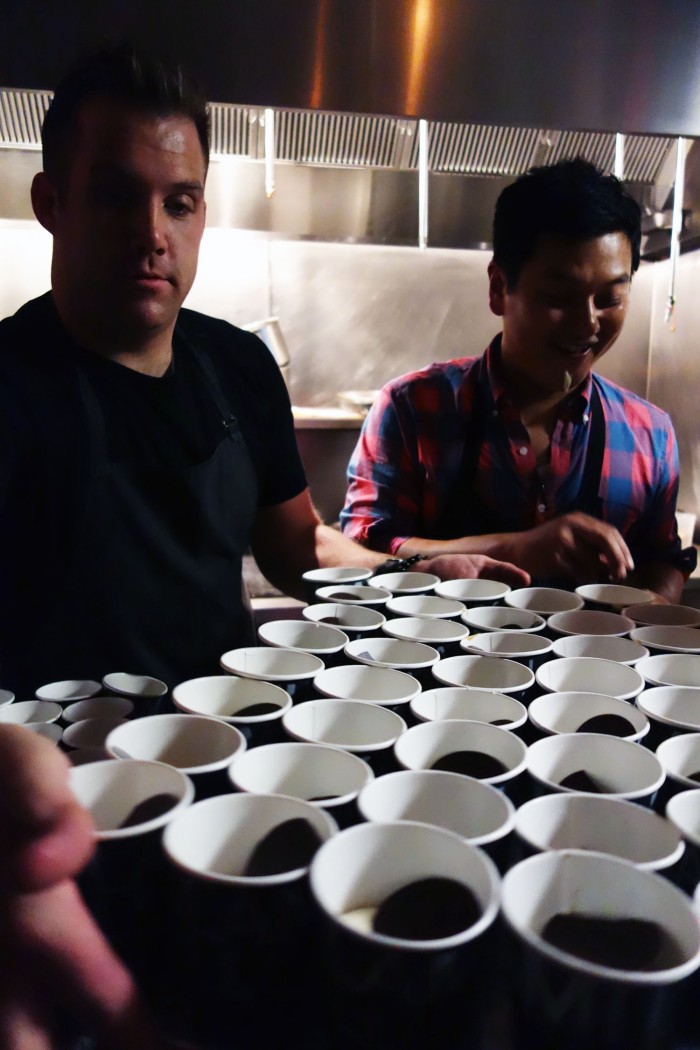 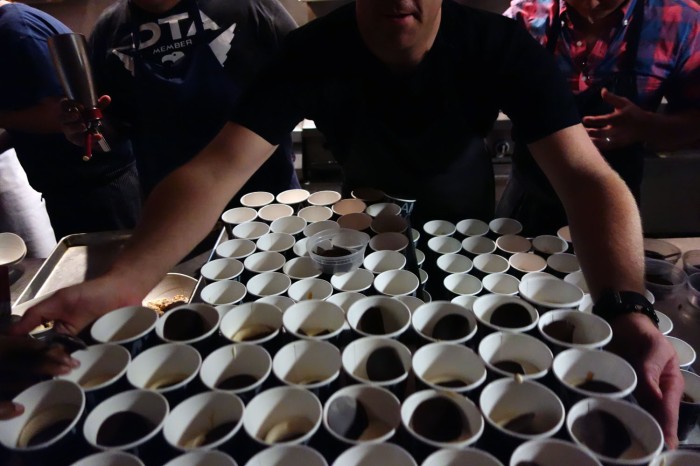 Dessert was really all about team work, with Jonah Kim helping Chris Ford dress his creations, little sundae-type things which, I think, were meant to emulate the Wit and Wisdom Sundae, which the restaurant’s dessert menu is known for. From what I could tell, this was a white chocolate custard/mousse/ice cream piped over a dense chocolate brownie, topped with cocoa nibs, a puck of chocolate and dusted with his signature pork fat peanut brittle dust. By the end of the night I was quite full, so I didn’t end up trying this, but I did see many contented faces on those around me who did. I expected nothing less of a signature creation by Food & Wine’s Best New Pastry Chef of 2012.

A dessert I couldn’t help trying was the Everything Cookie which Chris Ford has made famous at LAMILL Coffee in Baltimore. It is actually very similar to Momofuku Milk Bar‘s “Compost Cookie,” if only in concept – throwing everything you can into a cookie to add as much textural/flavoral contrast and intrigue as possible to something which is otherwise pretty simple. I must admit, I actually preferred these to the Compost Cookies, in that these were altogether bigger and thicker, with the ingredients also left in big clumps proudly studding the cookie instead of being pulsed down to a blend and incorporated into the dough. Along with the giant chunks of bittersweet chocolate chips, there was oatmeal, popcorn, pretzels and I think potato chips and some raisins. There were also giant clusters of peanut brittle (or was it toffee?) made with pork fat that. These, when bitten into, added a tantalizing crunch and separated the cookie into pieces by delineating trenches that would form in the cookie. Needless to say, I wrapped quite a few of these into napkins to take home with me. I had one with my coffee the morning after, still just as delicious.

Just as in May, I had a great time at this month’s takeover event. The chefs seemed like they were genuinely having a good time, pulling silly pranks on each other, taking shots every once in a while and teasing each other like blushing schoolboys in a schoolyard. The counter was no barrier for their positive energy, their giggles crossing right over to crowds of happy eaters. The food seemed to be the stuff they themselves like to eat – pig parts on rice, comforting sticky noodles, crispy chicken. Nothing too fancy, though packed in flavor and immensely satisfying. It was nice to see the chefs themselves picking at the leftovers at the end of the night, pulling some onto plates for themselves and for the bar staff who had not had the chance to visit the kitchen the entire night and who must have been famished by that point. Good times all around. Kudos for Graffiato for making it happen!